(champ volcanique 2217 m / 7,274 ft)
Alligator Lake in southern Yukon, Canada, is a group of basaltic cones and lava flows (the Miles Canyon basalts). It is located at the northern extremity of the Stikine volcanic belt, 30 km southwest of the capital city Whitehorse.
The field contains 2 cinder cones on top ... [informations]

(cinder cones 1880 m / 6,168 ft)
Atlin is a group of young cinder cones and lava flows on the Teslin Plateau east of Lake Atlin in western British Columbia, Canada. The largest cone is 1880-m-high Ruby Mountain (named for the brilliantly colored tephra deposits), which has been partially eroded by glaciation. [informations]

(champ volcanique 2500 m / 8,202 ft)
The Bridge River Cones are a field of small basaltic cinder cones in SW British Columbia, Canda. The youngest activity from this volcanic area could be less than 1500 years old. [informations] 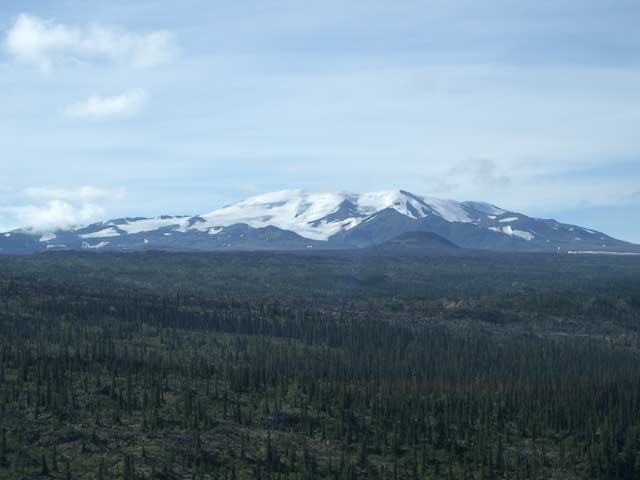 (champ volcanique 1239 m / 4,065 ft)
Fort Selkirk is a volcanic field near the junction of the Yukon and Pelly rivers in central Yukon. It is the northernmost young volcanic field in Canada.
The volcano consists of large valley-filling lava flows and 3 cinder cones.
The volcanic field developed at the in... [informations] 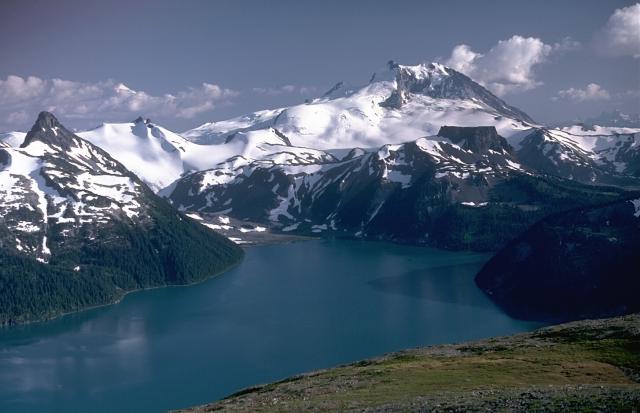 Mount Garibaldi, rising above scenic Garibaldi Lake to the north, is a largely Pleistocene stratovolcano capped by a lava dome complex. The volcano was partially constructed over the Cordilleran ice sheet and displays many ice-contact features. Its final eruptions during the early Holocene included the emission of lava flows that mantled the west-side landside headwall and a massive lava flow from Opal Cone, a SE flank vent, that traveled 20 km to the south and west. Photo by Lee Siebert, 1983 (Smithsonian Institution)
Mt Garibaldi volcano at the head of Howe Sound, 66 km north of Vancouver in SW British Columbia is probably Canada's best-known volcano and part of the active Cascades Range. It is a young stratovolcano capped by a complex of lava domes. Its most recent eruptions occurred at the ... [informations]

(volcan bouclier 2012 m / 6,601 ft)
Heart Peaks shield volcano is located NW of Level Mountain in NW British Columbia, Canada. It is the third largest center in the northern Cordilleran volcanic province. The volcano, covering an area of 275 sq km, last erupted during the last ice ages, and it is uncertain whether ... [informations]

(cinder cones 1880 m / 6,168 ft)
A field of 8 cinder cones near the Iskut-Unuk River in NW British Columbia, Canada, is located at the southern end of the Stikine volcanic belt. [informations]

(volcan bouclier 2190 m / 7,185 ft)
Level Mountain in NW British Columbia, Canada, SW of Dease Lake and north of Telegraph Creek is the most voluminous and most active volcano of the Stikine volcanic belt. [informations] 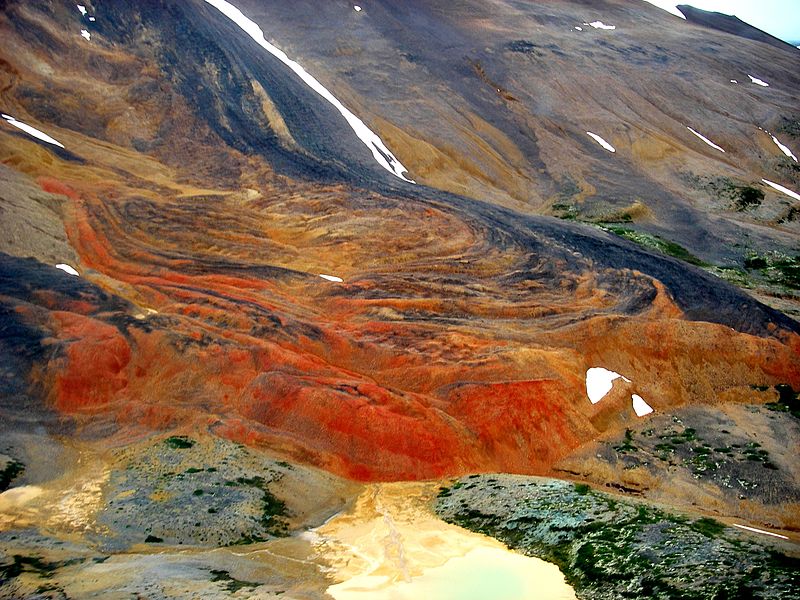 Strange flows near the Raspberry Pass area of the Spectrum Range. (photo: Wikimedia Commons)
Spectrum Range, south of Mount Edziza, in NW British Columbia, is one of four large composite volcanoes that make up the Mount Edziza-Spectrum Range volcanic complex.
Similar to the other 3 central volcanoes, Spectrum Range stratovolcano is formed... [informations]

(cinder cone 600 m / 1,969 ft)
Tseax Cone (also called Tseax River Cone or the Aiyansh volcano) is a young cinder cone in the Northern Cordilleran Volcanic Province in British Columbia, Canada. It is the site of one of Canda's most recent eruptions, which was a major lava flow around the years 1750 or 1775. Ts... [informations]

(champ volcanique 2123 m / 6,965 ft)
The Tuya volcanic field is a broad volcanic region near Lake Tuya in the Cassiar Mountains and Tanzilla Plateau area of northern British Columbia, Canada. It contains small shield volcanoes and cinder cones which were formed under glacial ice. They are the type locality of so-cal... [informations]

(cinder cones 2015 m / 6,611 ft)
The Wells Gray-Clearwater volcanic field is located in the Quesnel Highland of east-central British Columbia, Canada. The volcanoes are basaltic cinder cones and their lava flows. The latest eruption took place from Kostal cone about 400 years ago, thus being one of the most rece... [informations]
First visit to our site? If you havn't done it yet, download the Volcanoes & Earthquakes app to get one of the fastest volcano news online:
Android | IOS

Photos of Dallol
Look at one of the most surreal landscapes on Earth, created by hot springs, colorful salt deposits and volcanic gas vents.
Interactive map

Volcanoes & Earthquakes
Look up active volcanoes and earthquakes worldwide on our web-app, featuring an interactive map you can embed on your website or use as stand-alone tool.
Chile 7-16 Dec 2020

Solar Eclipse & volcano tour
A total solar eclipse will occur on 14 Dec 2020 and pass over southern Chile and Argentina. Chile's most active volcano Villarrica is located exactly on the center line where the eclipse will be best to observe.
We offer you the unique chance to combine the eclipse with a tour to one the world's most beautiful volcanic areas - the Lake District in Chile.
Largest volcano

Do you know which is the biggest volcano in the world?
Popo Special

Popocatépetl Volcano Special
The activity of Mexico's most active and largest volcano has been picking up gradually during the past months. If you like to join a small group of volcano enthusiasts, join us, stay 5 nights near the volcano and move around for extended day- and night-time observation.
Why is there advertising on this site?