This quake was likely an aftershock of the 6.7 quake Mindanao, Philippines, 15 December 06:11 UTC, which had occurred 2 jours earlier. 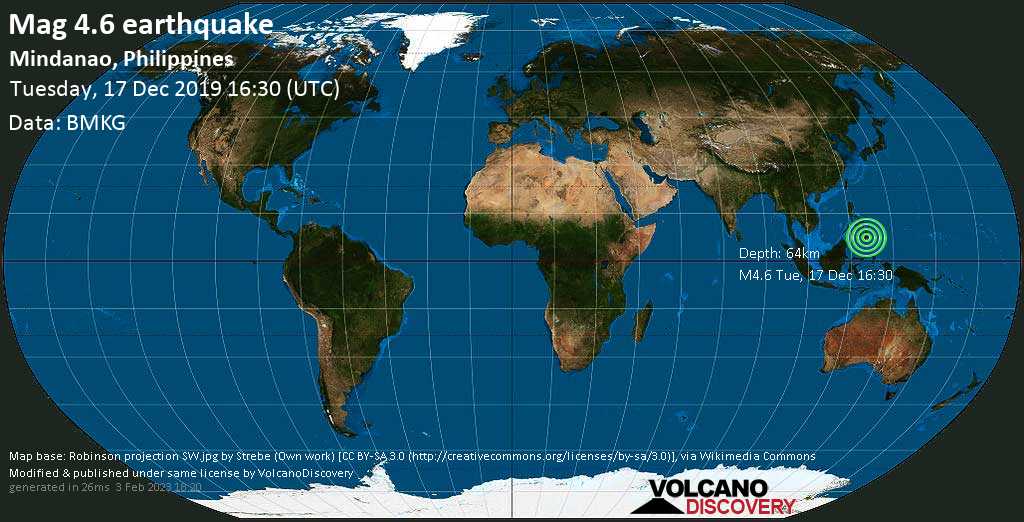 User reports estimate the perceived ground shaking intensity according to the MMI (Modified Mercalli Intensity) scale.
Contribute:
Leave a comment if you find a particular report interesting or want to add to it.
Flag as inappropriate.
Mark as helpful or interesting.
Send your own user report!
Tripoli, Arkadias, Greece / Very weak shaking (MMI II) : Every day i am getting scared from earthquakes hapopening in the other side of the planet, especially Mindanao. They are making Greece tremblle. I believe that Krakatoa, Kilalhuea and a new one will eplode violentlly the next years
Try our free app!

Volcano & Earthquake news feeds: If you like to use RSS to access the latest news about volcanoes and earthquakes without needing to visit the site, have a look at our available news feeds!
Fuego

Current activity of Bardarbunga volcano, Iceland: An intense seismic crisis started at Bárdarbunga volcano on 16 August 2014 and is continuing at the time of writing (23 Aug). It may or may not lead to a volcanic eruption, possibly under the Vatnajökull ice cap.
Follow updates as news come in!
Why is there advertising on this site?