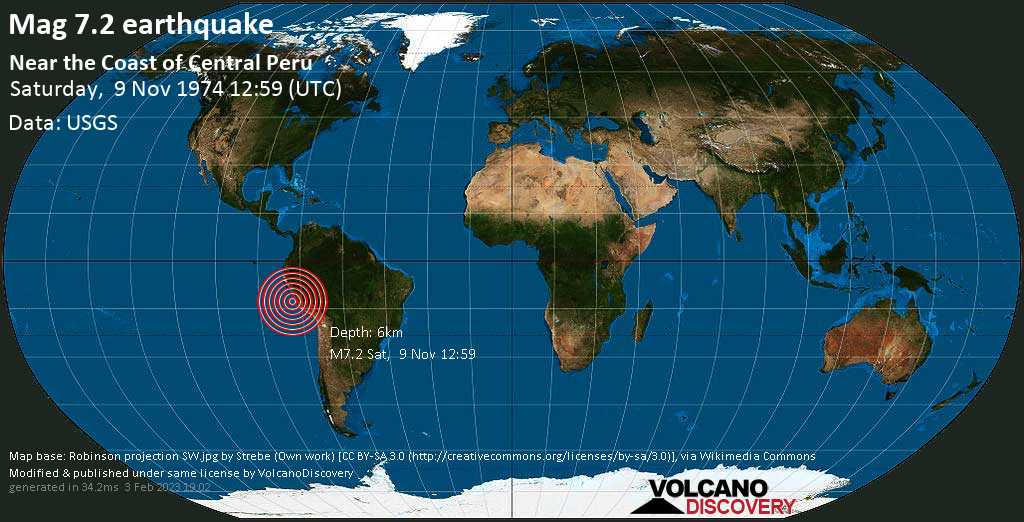 Aftershocks of the 7.2 quake Near the Coast of Central Peru 9 November 12:59 UTC

More info
Based on its magnitude, the fault that was active during the quake ruptured along a surface of approx. 1585 km2 (=612 sqare miles) as a first-order estimate. The length of the rupture zone thus was probably around 69 km (43 mi).
Aftershocks typically occur during the weeks, months or even a year following the quake at or near the same fault, at distances of up to approx. two times the length of the rupture zone.
The often broadly linear arrangement of aftershock epicenters encompasses the rupture zone of the main shock (check on the map below to verify).
Recorded aftershocks, latest first (13 quakes):

Volcano Tours on Hawai'i: The Hawaiian Islands are not only home to the most active volcanoes in the world, Kilauea and Mauna Loa on the Big Island, but also boast a unique natural environment. Born by volcanic activity of a very active hot spot in the middle of the Pacific Plate, they are a showcase of natural history.
Live Volcano Webcams

Volcanic crisis at Sakurajima - updates: A strong earthquake swarm and increased inflation were detected in August 2015 and triggered authorities to raise the alert level, as volcanologists think that a larger eruption could follow. News and updates on the events can be found on this page.
Danakil13-26 Nov 2021

Desert, Salt & Volcanoes: Experience one of the geologically most active areas on the planet: the Danakil desert in northern Ethiopia. Highlights include Erta Ale volcano with its active lava lake and Dallol hydrothermal fields offering a surreal landscape of colors, salt, geysers and springs.
Why is there advertising on this site?