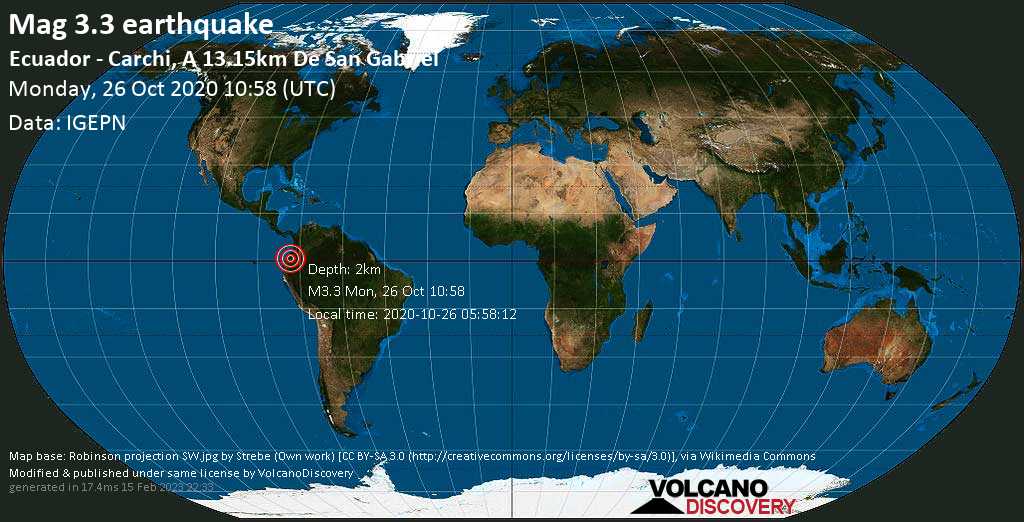 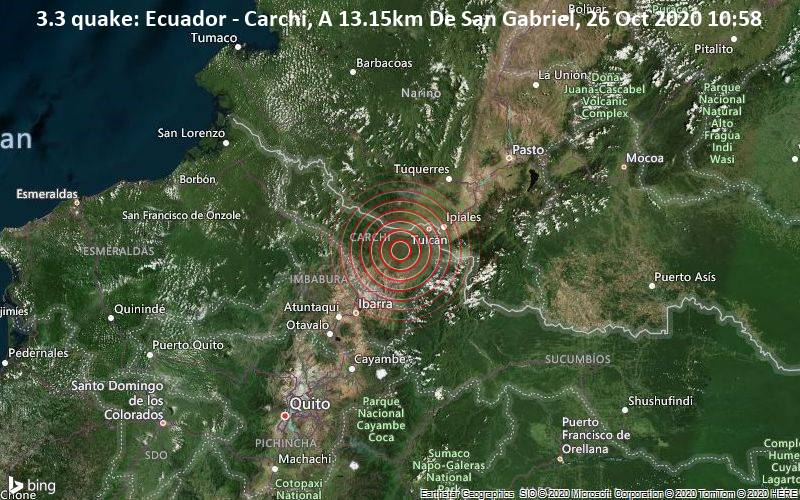 3.3 quake: Ecuador - Carchi, A 13.15km De San Gabriel, 26 Oct 2020 10:58
A very shallow magnitude 3.3 earthquake was reported early morning near the town of El Ángel, Ecuador. According to the Institute of Geophysics of the National Polytechnic School in Quito (IGEPN), the quake hit early morning on Monday 26 October at 5.58 am local time at a very shallow depth of 2 km. Shallow earthquakes are felt more strongly than deeper ones as they are closer to the surface. Magnitude and other quake parameters can still change in the coming hours as the agency continues to process seismic data.
A second report was later issued by the European-Mediterranean Seismological Centre (EMSC) agency, which listed it as a magnitude 3.5 earthquake.
Based on the preliminary seismic data, the quake should not have caused any significant damage, but was probably felt by many people as light vibration in the area of the epicenter.
Towns or cities near the epicenter where the quake might have been felt, based on preliminary calculations, include El Ángel (pop. 4,000) at a distance of 11 km with weak shaking, San Gabriel (pop. 15,100) at a distance of 13 km with weak shaking, and Ibarra (pop. 133,000) at a distance of 47 km with very weak shaking. In Pasto (pop. 382,200, 88 km away), the quake was probably not felt.
Download the Volcanoes & Earthquakes app to get one of the fastest seismic alerts online:
Android | IOS

User reports estimate the perceived ground shaking intensity according to the MMI (Modified Mercalli Intensity) scale.
Contribute:
Leave a comment if you find a particular report interesting or want to add to it.
Flag as inappropriate.
Mark as helpful or interesting.
Send your own user report!
Huaca Ecuador / Very weak shaking (MMI II)
Try our free app!

Raung volcano photos: One of the largest and most active volcanoes in East Java, rarely-visited and relatively unknown Raung became (in)famous during its recent eruption in 2015 when its frequent ash plumes forced the repeated closure of Bali's airport.
Reviews

What clients have said: Browse through feedback about our tours from customers, read what they have said about us!
Volcano Videos