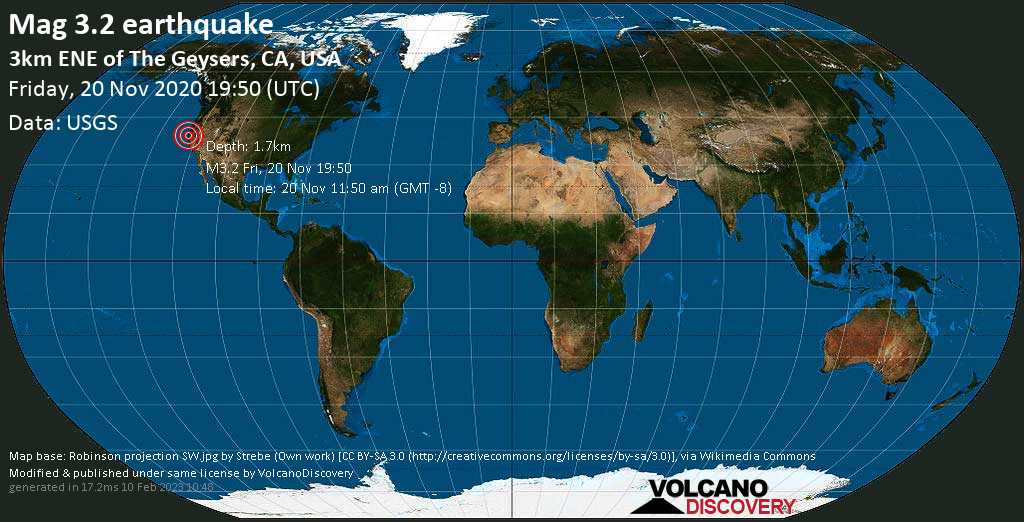 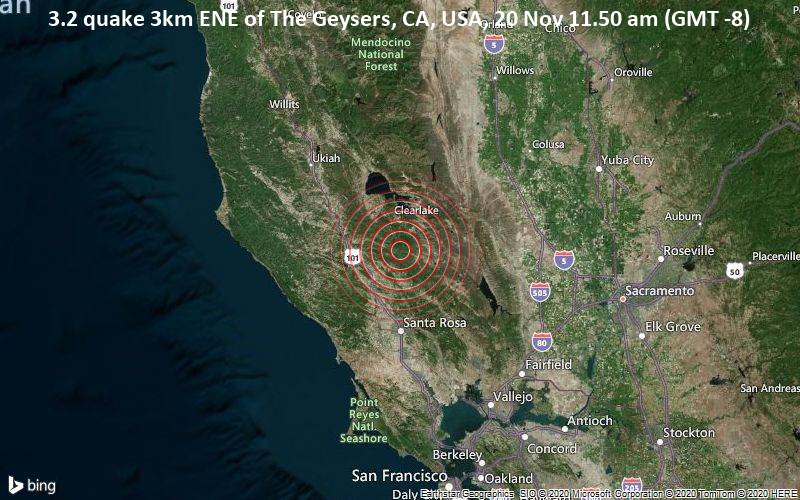 3.2 quake 3km ENE of The Geysers, CA, USA, 20 Nov 11.50 am (GMT -8)
An earthquake of magnitude 3.2 occurred in the morning on Friday 20 November 2020 at 11.50 am local time near the town of Cobb, California, as reported by the United States Geological Survey (USGS).
According to preliminary data, the quake was located at a very shallow depth of 1.1 miles. Shallow earthquakes are felt more strongly than deeper ones as they are closer to the surface. The exact magnitude, epicenter, and depth of the quake might be revised within the next few hours or minutes as seismologists review data and refine their calculations, or as other agencies issue their report.
Our monitoring service at VolcanoDiscovery identified a second report from the European-Mediterranean Seismological Centre (EMSC) which listed the quake at magnitude 3.2 as well.
Based on the preliminary seismic data, the quake was probably felt by many people in the area of the epicenter. It should not have caused significant damage, other than objects falling from shelves, broken windows, etc. Weak shaking might have been felt in Cobb (pop. 1,800) located 2 miles from the epicenter, Middletown (pop. 1,300) 6 miles away, Hidden Valley Lake (pop. 5,600) 9 miles away, Lower Lake (pop. 1,300) 10 miles away, and Geyserville (pop. 900) 11 miles away.
Towns or cities near the epicenter where the quake might have been felt as very weak shaking include Windsor (pop. 27,500) located 17 miles from the epicenter, Santa Rosa (pop. 175,000) 24 miles away, and Rohnert Park (pop. 42,400) 31 miles away.
Download the Volcanoes & Earthquakes app to get one of the fastest seismic alerts online:
Android | IOS

14.5°C (58 F), humidity: 39%, wind: 0 m/s (1 kts) from SSW
Primary data source: USGS (United States Geological Survey)
Estimated released energy: 4 x 109 joules (1.11 megawatt hours, equivalent to 0.951 tons of TNT) More info
[afficher la carte]
Show interactive Map
[smaller] [bigger]
If you felt this quake (or if you were near the epicenter), please share your experience and submit a short "I felt it" report! Other users would love to hear about it!
Also if you did NOT feel the quake although you were in the area, please report it! Your contribution is valuable also to earthquake science and earthquake hazard analysis and mitigation efforts. You can use your device location or the map to indicate where you were during the earthquake. Thank you!

User reports estimate the perceived ground shaking intensity according to the MMI (Modified Mercalli Intensity) scale.
Contribute:
Leave a comment if you find a particular report interesting or want to add to it.
Flag as inappropriate.
Mark as helpful or interesting.
Send your own user report!
Lakeport, CA / Light shaking (MMI IV) / rattling, vibrating / 2-5 s : My cats ran away and ten seconds later it started shaking and there was noise like a semi-Truck! I rolled off my bed to the floor face down with my hands covering the back of my my head and my pony tails were still taped onto the sides of my head. I cried like little girl and whimpered. Suddenly I heard a loud blast from an air can horn that my wife was blasting at me! I could not hear her as my ears rang but I could read her lips and she said, "you know what that was for" and motioned for me to | One user found this interesting.
8 km NNE of epicenter [Map] / Light shaking (MMI IV) / horizontal (sideways) swinging
Try our free app!

Android | iOS version
en haut
First visit to our site? If you havn't done it yet, download the Volcanoes & Earthquakes app to get one of the fastest seismic alerts online:
Android | IOS
Why is there advertising on this site?