Update Wed 18 Apr 20:02
Earthquake activity and degassing from the submarine vent continue at El Hierro. 2 relatively large quakes with magnitudes 3 and 2.2 occurred on 16 April at 15 and 19 km depth. A faint tremor signal is still present and has increased slightly recently. At the sea surface, discolored water and raising bubbles can be observed at spots above the submarine volcano south of La Restinga and in the Bay of Naos.
Update Thu 05 Apr 18:11
Some earthquake activity (about 1-2 small quakes per day) continues at El Hierro and a zone of degassing ("jacuzzi") has been observed in a different spot today, west of the location of the principal vent. The volcanic tremor signal has disappeared.

IGN has published a video that shows degassing activity at the the submerged volcanic edifice at depths between 100 and 150 m.
According to Prof. Ramon Ortiz, lava emission from the submarine vent ended in late February, judging from seismic data. In his opinion, the continuous seismicity in the last week with again increased magnitudes suggests that the eruptive process is not finished yet and he would not be surprised if a new eruption occurs.

El Hierro - official end of eruption, but some doubt remains

Update Wed 28 Mar 22:40
The authorities have decided to declare the eruption ended and shut down the web cameras at La Restinga and stop active monitoring of what could still be going on at the sea floor south of La Restinga.
Volcanic tremor is still present, although at minimal levels and some earthquake activity continues beneath the island. According to our friends at lava cafe, chances are that the eruption continues with little change, despite the official statements which would be mainly motivated by the intention not to scare potential visitors to the island. We are not able to really judge well what is or not going on, but it will be interesting to watch what is going to happen next.
http://volcanocafe.wordpress.com/2012/03/27/el-hierro-and-the-art-of-bad-science/
Update Sat 24 Mar 19:36
A small jacuzzi above the underwater vent has been observed today and occasionally during the past days.

Images of incandescent scoria under water

Update Mon 19 Mar 23:47
The University of Las Palmas de Gran Canaria has published a brief article with images of glowing lava seen floating at a depth of 70 m, taken on 14 March during the recent campaign of the ROV E-Wally on board of the "Atlantic Explorer" oceanographic research vessel.
http://www.ulpgc.es/hege/almacen/download/7094/7094686/expedicicon_guayota_2.pdf 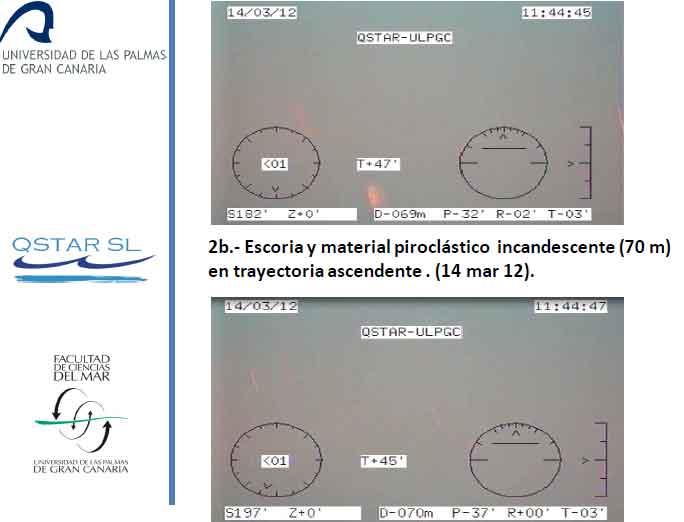 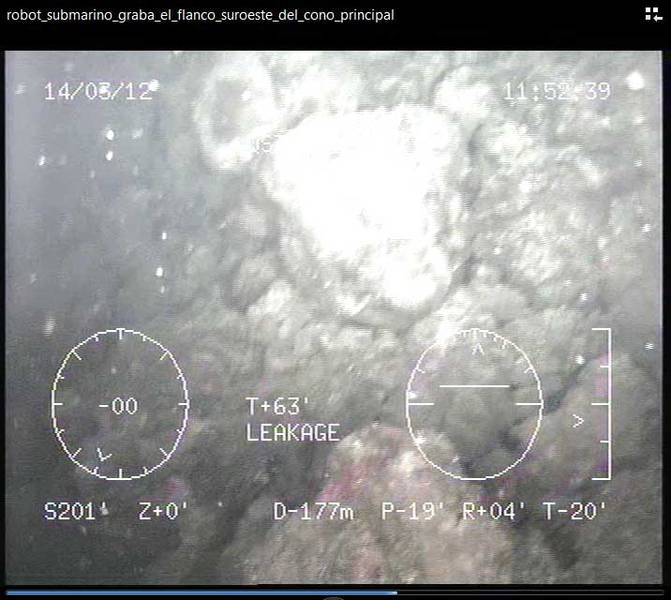 The first results of the latest campaign of scientists from the University of Gran Canaria have now been published. For the first time, direct images of the new underwater volcano were obtained from locations at its southwestern flank and near the crater area (to 172 m). The vent itself seems to be at 120 m depth according to the results. (This contradicts the previous measurement of 88 m, or it refers to a different vent).

- Hot jets are formed from a vent at 120 m depth, forming convecting water cells reaching depths of about 40-60 m. On 13 March, the robot entered one of these cells and got caught in uncontrolled rotations while its thermal sensors showed a strong increase.
- Pyroclastic projections were observed to reaching about 40-50 m in height (i.e. the ejected pyroclasts reach depths of 80-70 m). Ejected bombs form (underwater) ballistic parabolic trajectories and fall back under gravity. Some of these pyroclastic seem to be large.
- During the dive on Wednesday (14 Mar), the southwest flank of the main cone was filmed. It has a steep slope and is composed mainly by large pyroclasts (see screenshot), some of which are similar to the hollow lava balloons that frequently reached the surface in the months of November and December.
- Finally, near the edge of the crater, at a depth of about 170m and under a rain of ash, a school of fish (amberjack possibly) was seen as well as smaller marine animals and closer to the surface, jellyfish.
Update Thu 15 Mar 20:18
A weak stain is sometimes visible, and harmonic tremor continues at minimal levels.
In the meanwhile, research crew on board the Atlantic Explorer said they could obtain the first images of the submarine volcano. Hopefully, these will be published soon! 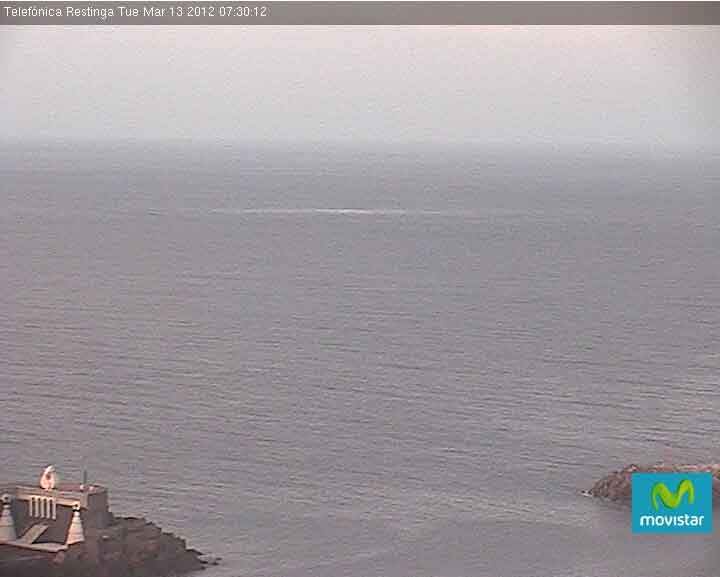 The new jacuzzi this morning seen on the webcam and captured by earthquake-report.com
A weak stain has been visible today above the submarine spot in the Las Calmas Sea south of La Restinga, and a jacuzzi occurred faint this morning at 07:30 am. Volcanic tremor seems to continue at constant, although minimal levels. This suggests that the eruption is indeed continuing.
The research vessel Atlantic Explorer is currently working in the area.
Update Sun 11 Mar 09:06
Volcanic tremor continues at minimal levels and 3 earthquakes so far at 8-15 km depth beneath the central part of El Hierro. No visible stain can be seen at the water, and recently, the exclusion zone for fishing, scuba diving and other activities has been reduced to a 0.5 nautical mile on 9 March.
Whether the eruption in fact continues silently, and continues to actively build up a submarine cone, currently at less than 90 m depth, remains (an intriguing) speculation, and opinions widely differ.
The Atlantic Explorer research vessel with scientists from the Universidad de Las Palmas de Gran Canaria and SOS Océanois currently on its way for a new research campaign. Hopefully, they will be able to find out more.

Eruption of El Hierro continues and could be a long one, recent underwater survey shows 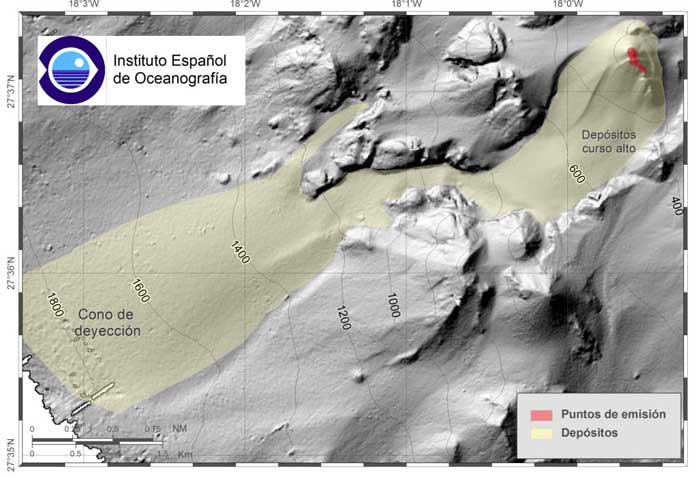 New bathymetric map of the submarine topography south of El Hierro showing the new cone (Informe de campaña BIMBACHE1011‐11, Español Instituto Oceanográfico)
The results of the latest bathymetric mapping survey by the crew of the oceanographic research vessel Ramon Margalef show that the eruption is still continuing, although just days earlier the eruption had been declared "ended".
New bathymetric data show that the submarine cone has reached 88 m below sea levels, and has thus grown 36 meters during the past month. If present grow rate continues, "we should start to see surface disturbances in about two to four week as hydro magmatic explosions start", Carl writes on the interesting lavacafe blog (see comments).
In addition, acidity and electrical conductivity levels were measured and results show that SO2 and CO2 are being released from a point source at still similar levels as during the last survey, indicating that the vent is open and still active.
The shape of the main cone has become less steep and more similar to a shield volcano with shallower angles, which is a result of more fluid lava being erupted recently.
The eruption in its first phase had produced a significant amount of older (and colder), chemically differentiated rhyolithic magma, which has been the main reason for the large stain and the frequent lava balloons. At present, the eruption is in its matured stage. More fluid and hotter basaltic lava is rising without major obstacles from the mantle reservoir is being erupted and forming pillow lavas at the vent, but causes much less visible activity at the surface.
According to the article on lavacafe, the current vent can be regarded as a flank vent of Tanganasoga volcano (in the center of the island), acting as a pressure relief at the far southern end of the fissure swarm extending south from Tanganasoga.
Low frequency tremor episodes are possibly associated with deep magmatic movements. As now the pressure is in near-equilibrium, the intensity of the measured tremor can be low, but the eruption rate could still be the same rate as the magma production from the hot spot mantle source feeding El Hierro volcanic system. Bob concludes that "with this in mind we can rule out any large changes in the eruption as long as the vents are open. And the eruption can be a very long one."

Eruption is probably over

Update Tue 06 Mar 10:34
On 5 March, the Instituto Geografico wrote that the eruption that had started on 10 October 2011 has ended.
In fact, seismic and visual activity are not completely absent, but only at very low levels with ever increasing intervals of complete absence. Since there is no direct observation of the submarine vent to determine if any lava is still being erupted, it is difficult to say whether the eruption has ended. However, the overall decreasing trend during the past months illustrates that the eruption is gradually fading out, if it has not yet died already. 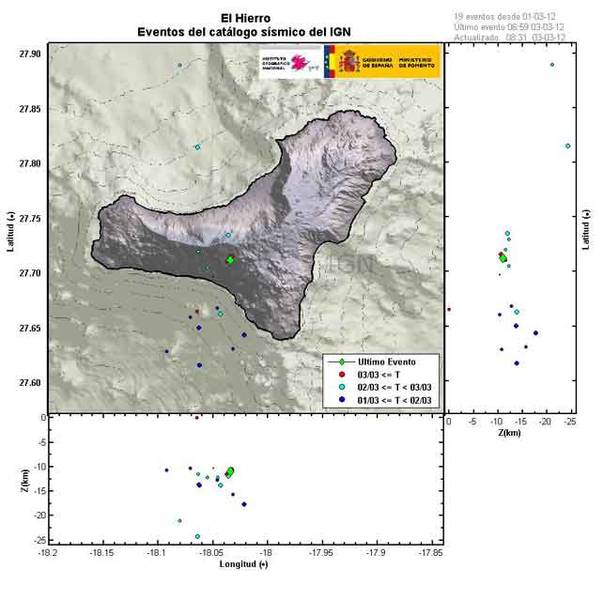 Earthquakes beneath El Hierro during the past 3 days (IGN) 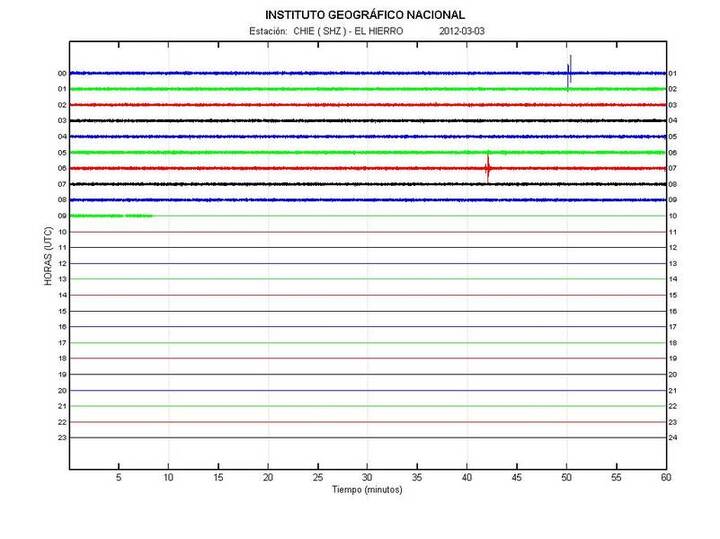 Volcanic tremor on 3 Feb (IGN)
No immediate end of the eruption is in sight, although it continues at minimal intensity. Volcanic tremor has recovered to a weak and constant level, and occasionally one or two spots with stained water were observed on the sea surface.
Earthquake activity continues with 5-10 mostly very small, but slightly stronger compared to previous weeks, quakes centered around 10 km depth mostly in the south-central part of the island. These quakes could suggest that intrusions of magma in the upper crust beneath the island continue, and there is a small chance that new vents could open up.
Update Thu 01 Mar 22:42
No significant changes can be reported about El Hierro. The eruption continues to show some weak signs every now and then, with occasional some stain at the surface above the vent, a few minor earthquakes clustered in the center of the island at around 10 km depth, and a very weak tremor signal, which had a short-lived weak burst of activity early today.
Latest Reports - Current Activity
Part 5: updates Aug-Dec 2012
Part 4: updates Apr-Aug 2012
Part 3: updates Mar-Apr 2012
Part 2: updates Dec-Feb 2012
Part 1: updates before Dec 2011 on El Hierro News page
First visit to our site? If you havn't done it yet, download the Volcanoes & Earthquakes app to get one of the fastest volcano news online:
Android | IOS
Découvrez notre app gratuite !

Merapi volcano photos
One of the most active and most dangerous volcanoes of Indonesia: Merapi meaning "the one who makes fire", is a feared but also venerated holy mountain looming over the city of Yogyakarta, capital of Central Java.
Tour Classics

VolcanoDiscovery tours
A selection of our most popular trips, which we have been offering and improving over many years now: Stromboli & Etna, Santorini, Java, Ethiopia, Nyiragongo and more. Have a look!
Volcans et séismes

What clients have said
Browse through feedback about our tours from customers, read what they have said about us!
Why is there advertising on this site?