Data from deformation-monitoring instruments and observations from a remote camera showed that during 28 March-3 April, lava-dome growth at Mount St. Helens continued. Seismicity persisted at low levels, punctuated by M 1.5-2.5 and occasionally larger earthquakes. On 3 April, a GPS unit on an active spine showed W-ward movement at a rate of about 30 cm/day.

Over the past weeks and months, the lava dome and spine inside Mount St. Helens'crater continued to grow, accompanied by generally low levels of seismicity.

The lava dome at Mount St. Helens continues to grow, and producing a prominent spine that rises by about 2-3 meters per day. Small tremors are frequently registered at the volcano, believed to be caused by the movements of the spine being pushed up by pressurized magma in the conduit.

On 29 May at 09h08 local time, an ash and gas plume rose to 5-6 km altitude above the new lava dome of Mt. St. Helens. As CVO reports, the event was not caused by explosive activity, but rather intense degassing and a partial collapse of the new lava dome, accompanied by a quake of magnitude 3.1. 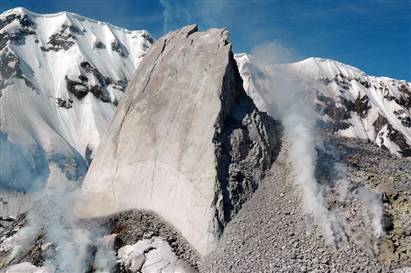 The lava dome inside Mt. St. Helens'crater continues to grow. It has been forming a giant, spectacular spine, about 300 ft high and growing at about 4-5 in (ca. 12-15cm) per day.
The park has reopened the Johnston Ridge Observatory viewing point.

Growth of the new lava dome inside the crater of Mount St. Helens continued during 5-10 April, accompanied by low rates of seismicity, low emissions of steam and volcanic gases, and minor production of ash.

Over the past week, the new lava dome with a prominant spine continued to grow, at rates of up to several cm per day in some locations. Seismicity remains at low levels and only minor emissions of ash occrred.

During 25-31 May, growth of the new lava dome inside the crater of Mount St. Helens continued, accompanied by low rates of seismicity, low emissions of steam and volcanic gases, and minor production of ash. Lava extrusion continued at the N end of the new lava dome, while the high spines continued to crumble. Other parts of the lava dome moved at the relatively low velocity of about 0.3 m per day or remained stagnant. St Helens remained at Volcano Advisory (Alert Level 2); aviation color code Orange.

CVO (the Cascades Volcano Ovservatory, USGS) reports that the lava dome inside Mt. St. Helens'crater continues slowly to grow. Seismicity is low, and other eruptive activiy is limited to small emissions of steam and volcanic gases, and minor production of ash.
CVO warms of the danger of small lahars and the possibility that the eruption might intensify with little or no warning at any time.

As press reports on March 22, some areas around Mt. St. Helens volcano, that had been closed for visitors after the reawakening of Mt. St. Helens in Oct. 2004 are being reopened, since activity has been drastically decreasing. This includes the Johnston Ridge Observatory, was evacuated on October 2 as volcanic activity increased and now scheduled for reopening on 6th of May...
At the moment, the mountain will remain closed above the Loowit Trail, roughly the tree line, keeping the popular south-side climbing route off limits. Ridge-top trails north of the volcano and the Mount Margaret backcountry, a permit-only area, will reopen as conditions permit. Parts of the Loowit and Truman trails on the north side will stay closed because of possible mud flows.

Prior to the 1980 eruption, Mount St. Helens formed a conical, youthful volcano sometimes called the Fuji-san of America. During the 1980 eruption the upper 400 m of the summit was removed by collapse of the slope, that left a 2 x 3.5 km horseshoe-shaped crater now partially filled by a lava dome. Mount St. Helens is a very young volcano and only about 40-50,000 years old.
It has been the most active volcano in the Cascade Range during the past 10,000 years, and the modern edifice was constructed during the last 2,200 years, when the volcano produced basaltic as well as andesitic and dacitic products from summit and flank vents. Historical eruptions in the 19th century were witnessed by early settlers. 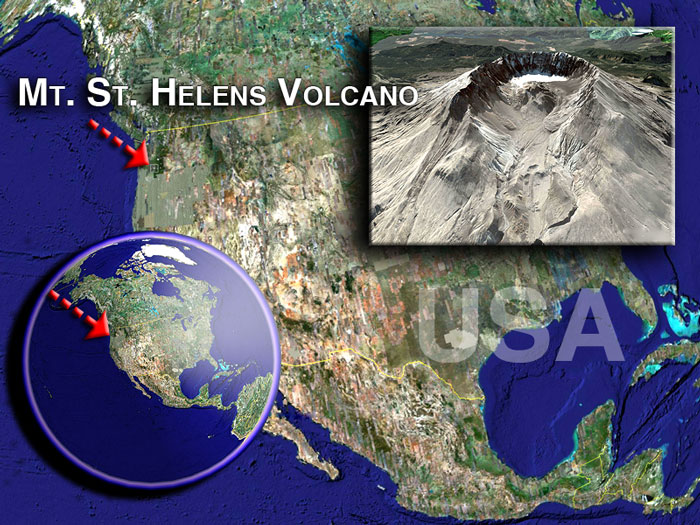 Mt. St. Helens in Sept. 2005, seen from the N with its grand amphitheatre left by the collapse during the 18 May, 1980 eruption (photo courtesy: W Heise).
Try our free app!

Volcano Calendars
We have published several volcano calendars over the years: usually, we use photos taken by us or our participants during our recent volcano tours and expeditions. A perfect gift if you're a fan of volcanoes!
Merapi

Merapi volcano photos
One of the most active and most dangerous volcanoes of Indonesia: Merapi meaning "the one who makes fire", is a feared but also venerated holy mountain looming over the city of Yogyakarta, capital of Central Java.
Italy