1948-1953 eruption of Hibok-Hibok volcano
A significant eruption started on 1 September 1948. A large explosion from the summit crater of Hibok-Hibok volcano, preceded by a week of intense earthquakes. The explosion created a cauliflower-shaped eruption plume and produced devastating pyroclastic flows and lahars down the NE side of the volcano. 8 suare km land were invaded and destroyed. In May 1949, a new lava dome started to grow in the crater.
The new lava dome continued to grow during the next 2 years dome and had become a prominent feature by late 1951. On 4 December 1951 pyroclastic flows went down the NE flank of the mountain and reached the outskirts of Mambajao town where 500 people were killed.
Large amounts of pumice and ash were found in the deposits, indicating that these pyroclastic flows were generated primarily by the explosion of fresh magma rather than dome collapse.
---
Source: Gordon A. Macdonald and Arturo Alcaraz (1956) "Nuées ardentes of the 1948–1953 eruption of Hibok-Hibok", Bull. Volc, v.18(1), pp 169-178
Derniers images satellite 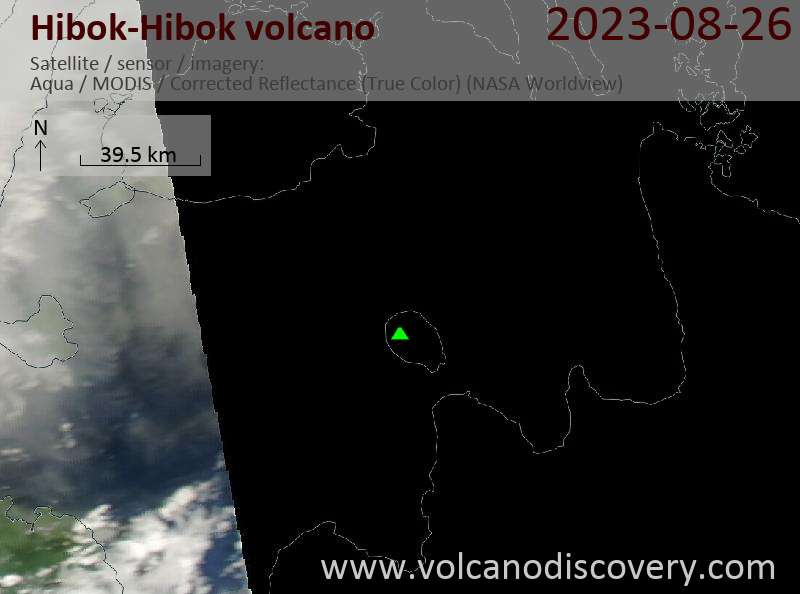 Desert, Salt & Volcanoes
One of our best volcano expeditions! Stay 3 full days / nights at the active lava lake of Erta Ale, explore the wonders of Dallol and the Danakil desert in northern Ethiopia. 14 days expedition during Nov-March, small groups, guided by geologist.
Vote for pictures

Image pool
View user-submitted images and vote for the Photo of the Month!
Batu Tara

Batu Tara photos
A remote island in the Flores Sea of Indonesia formed by a single volcano that has been in strong strombolian eruption for years. We regularly lead expeditions to there where we camp several days to observe it.
RSS feeds

Volcano & Earthquake news feeds
If you like to use RSS to access the latest news about volcanoes and earthquakes without needing to visit the site, have a look at our available news feeds!
Santorini Geology