1800-1801 eruption
The last (and only) historical eruption of Hualalai volcano was witnessed by one of Captain Cook's expedition crew members who had remained on the island. The eruption occurred from 2 fissure vents which fed 2 large lava flows to the west and northwest.
The Kaupulehu lava flow started high on the volcano at an altitude of between 1650-1800 m and reached the sea in 2 lobes between Kona Village Resort and Kiholo Bay, and beneath Kona International Airport. It covered Hawaiian villages at the shore and reached 16 km length.
A second lava flow was erupted from a vent at 500 m and built the Puhiopele cinder cone visible from the highway. This flow reached 6 km length also reached the sea. 3 other very small flows were erupted from vents located between the 2 main vents. ...plus
Derniers images satellite 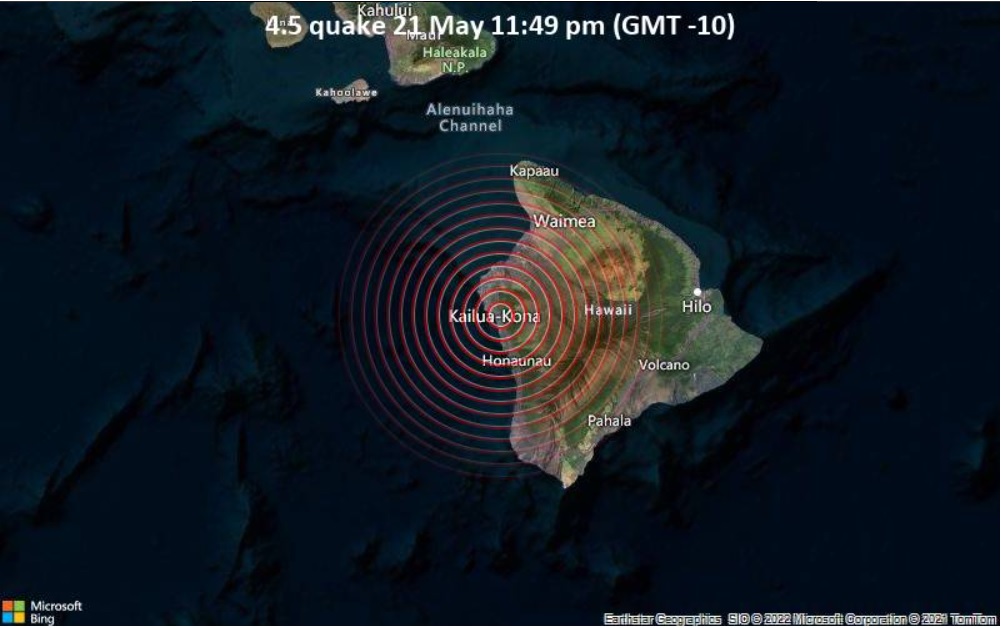 The Hawaiian Volcano Observatory (HVO) registered an earthquake with magnitude M 4.7 beneath the Island of Hawai'i at 11:50 local time yesterday. ... Read all

The Hawaiian Volcano Observatory (HVO) registered an earthquake with magnitude M 4.7 beneath the Island of Hawai'i at 11:50 local time yesterday. ... Read all
Découvrez notre app gratuite !

Volcano Discoveries
"One of the most eye-catching guides to the world's volcanoes ever published."
Greece earthquakes

Latest quakes in Greece
Greece has a lot of earthquake activity, but most of them occur around the margin of the Aegean microplate. The Cycladic islands are located in its center and therefore seismically comparably quiet.
Volcano News

Volcano News group
Join our group on facebook: post reports, updates, or other interesting facts about volcanism and volcanic activity worldwide and discuss with other members.
Why is there advertising on this site?
Support us - Help us upgrade our services!
We truly love working to bring you the latest volcano and earthquake data from around the world. Maintaining our website and our free apps does require, however, considerable time and resources.
We need financing to increase hard- and software capacity as well as support our editor team. We're aiming to achieve uninterrupted service wherever an earthquake or volcano eruption unfolds, and your donations can make it happen! Every donation will be highly appreciated. If you find the information useful and would like to support our team in integrating further features, write great content, and in upgrading our soft- and hardware, please make a donation (PayPal or Online credit card payment).