Volcanoes of Sulawesi and the Sangihe Islands

(Complex volcano 1795 m / 5,889 ft)
The compound Ambang volcano is the westernmost of the active volcanoes on the northern arm of Sulawesi. The 1795-m-high stratovolcano rises 750 m above lake Danau. Several craters up to 400 m in diameter and five solfatara fields are located at the summit. Ambang's only known his... [informations]

(Stratovolcano 1320 m (4,331 ft))
The massive Gunung Awu stratovolcano occupies the northern end of Great Sangihe Island, the largest of the Sangihe arc. Deep valleys that form passageways for lahars dissect the flanks of the 1320-m-high volcano, which was constructed within a 4.5-km-wide caldera. [informations]

(Volcan sous-marin -5 m / -16 ft)
Banua Wuhu is a submarine volcano in the Sangihe Islands, Indonesia, 45 km south of Awu. The volcano rises more than 400 m from the sea floor and almost reaches the surface, forming a shallow shoal at 5 m depth. Banua Wuhu, during some of its eruptions, has created temporary isla... [informations] 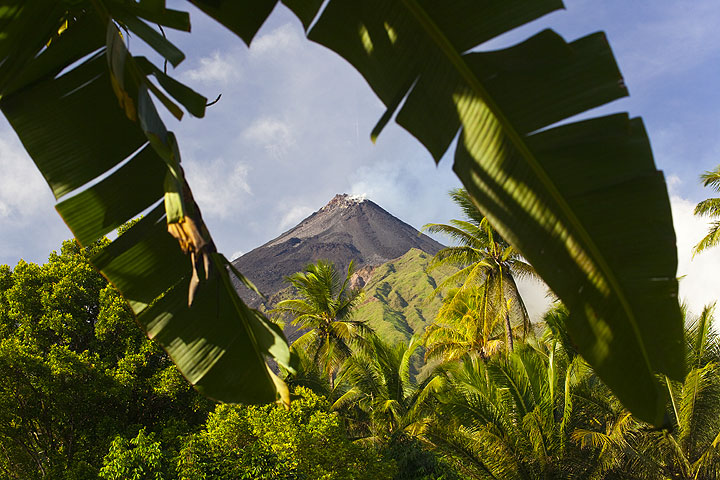 (stratovolcan 1995 m / 6,545 ft)
Klabat east of Manado city is an beautiful and isolated symmetrical stratovolcano rising almost 2000 m near the eastern tip of the northern arm of Sulawesi Island, forming the highest peak of Sulawesi. Klabat is probably still an active volcano and has active fumaroles on the sum... [informations]

(Stratovolcano 1580 m / 5,184 ft)
The twin volcanoes Lokon and Empung, rising about 800 m above the plain of Tondano, are among the most active volcanoes of Sulawesi.
Lokon, the higher of the two peaks (whose summits are only 2.2 km apart), has a flat, craterless top. The younger Empung volcano has a 400-... [informations]

(Stratovolcano 1324 m / 4,344 ft)
The elongated Mahawu volcano lies immediately east of Lokon-Empung volcano. It is the northernmost of a series of young volcanoes along a SSW-NNE line near the margin of the Quaternary Tondano caldera.
Mahawu is capped by a 180-m-wide, 140-m-deep crater that sometimes cont... [informations]

(Stratovolcano 725 m / 2,379 ft)
Ruang volcano is the southernmost volcano in the Sangihe Island arc, north of Sulawesi Island. The 4 x 5 km island volcano rises to 725 m across a narrow strait SW of the larger Tagulandang Island. The summit of Ruang volcano contains a crater partially filled by a lava dome in... [informations]

(caldeira 1549 m / 5,082 ft)
Riendengan-Sempu volcano, located just north of the frequently active Soputan volcano, is a volcanic system that includes the Sempu dome that grew within the 3-km-wide Riendengan caldera.
Another prominent feature is the Kawah Masem maar, an explosion crater in the W part ... [informations]

(Stratovolcano 1784 m (5,853 ft))
The small Soputan stratovolcano on the southern rim of the Quaternary Tondano caldera on the northern arm of Sulawesi Island is one of Sulawesi's most active volcanoes. The youthful, largely unvegetated volcano rises to 1784 m and is located SW of Sempu volcano. It was construc... [informations]

(stratovolcan 1149 m / 3,770 ft)
Tangkoko (also spelled Tonkoko, Tangkoko-Duasudara) is a stratovolcano 8 km north of the city of Bitung in NE Sulawesi, the most northeasterly of the volcanoes on the Island of Sulawesi, before the chain extends into the ocean as a chain of island volcanoes.
Tangkoko volca... [informations]

(stratovolcan 507 m / 1,663 ft)
Una Una (also known as Colo) is an isolated volcano in the Gulf of Tomni, offshore central Sulawesi. It is the site of sulfur extraction. [informations]

(unknown type - submarine volcano ca. -5000 m / -16,400 ft)
The existence of this volcano is questionable and there are no convincing data available to confirm the existence of this volcano in the Celebes Sea. [informations]
First visit to our site? If you havn't done it yet, download the Volcanoes & Earthquakes app to get one of the fastest volcano news online:
Android | IOS 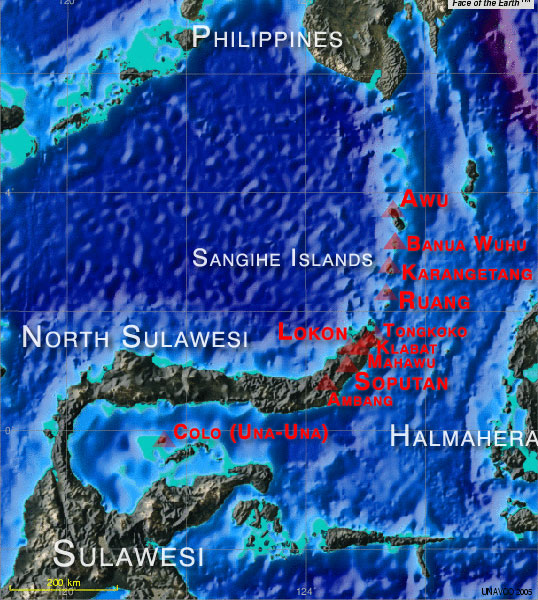 Find quakes in your area
Look up quakes near your current or any other location of interest worldwide!
Armenia 28 May-7 Jun 2023

Land of History
Armenia has an ancient history and rich cultural heritage to discover. Find true hospitality on unbeaten paths and discover its spectacular geology that shaped dramatic landscapes, hike to hidden century-old monasteries, walk through deep gorges cut into old lava plateaus, wander about on alpine meadows full of flowers, and enjoy superb fresh food... Join us on a relaxed relaxed geotour to one of our best destinations!
VAAC

1-3 day excursions
If you're interested in volcanoes, there are a number of excursions you should not miss if you're in the area: hike to the craters of Stromboli volcano, climb Etna volcano, get to know the unique volcanic history of Santorini - some examples of shorter (1-3 days) tours and excursions we offer.
Feedback

"Thank you very much for the formidable trip!"
Read what our clients have said about us and our tours!
Why is there advertising on this site?