1933-34 eruption & fatalities
The largest eruption of Kuchinoerabu-jima started in historic times occurred between late 1933 and lasted until 12 January 1934.
An explosion on 23 December ejected tephra to the SSE, killing 8 and injuring 26. Nanakama village, 1.5 km from the crater was burned by fire from glowing blocks.
Derniers images satellite 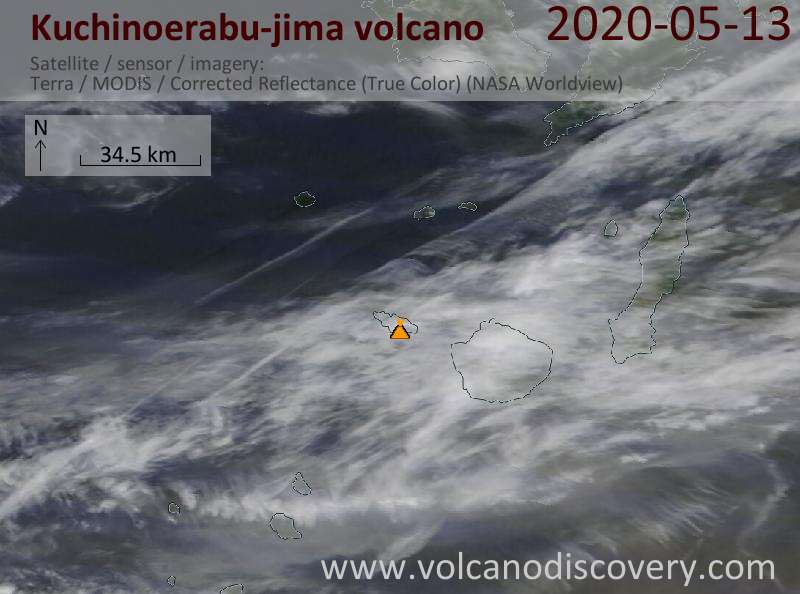 Exploring the unknown
We sometimes invite you to "test" new itineraries or destinations with us. Such trips are a reduced cost and require a higher degree of flexibility, but often offer a great deal of adventure.
Etna Trekking Tours

Do you know which is the biggest volcano in the world?
Krakatau

Krakatau volcano photos
Hundreds of photos from active Krakatau volcano in the Sunda Strait, Indonesia. Most of them taken during our various expeditions to this fascinating volcano.
Volcanoes in Africa

List and map of all volcanoes in Africa. Most volcanoes are located in the Great Rift Valley, but there are more.
Why is there advertising on this site?
Support us - Help us upgrade our services!
We truly love working to bring you the latest volcano and earthquake data from around the world. Maintaining our website and our free apps does require, however, considerable time and resources.
We need financing to increase hard- and software capacity as well as support our editor team. We're aiming to achieve uninterrupted service wherever an earthquake or volcano eruption unfolds, and your donations can make it happen! Every donation will be highly appreciated. If you find the information useful and would like to support our team in integrating further features, write great content, and in upgrading our soft- and hardware, please make a donation (PayPal or Online credit card payment).