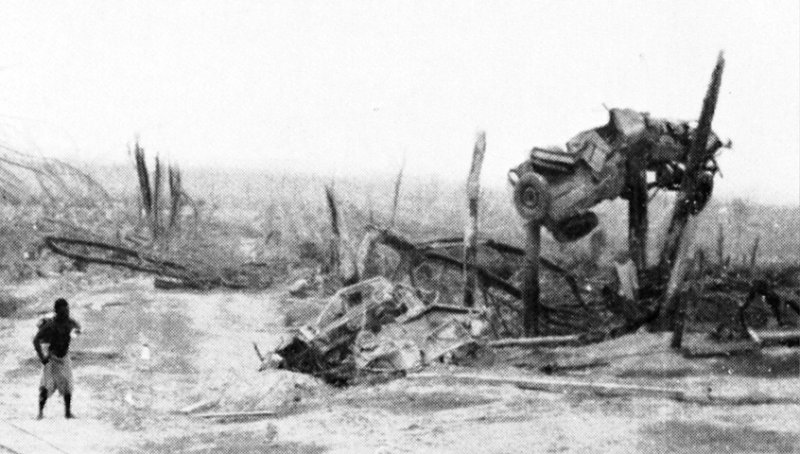 A jeep impaled on broken tree trunks illustrates the destuctive power of the pyroclastic surges generated by Lamington's eruption on 21 January 1958. From Taylor (1958)
The eruption of Mt Lamington on Sunday 21 January 1951 was the greatest natural disaster on Australian-administered territory of Papua New Guinea. The eruption destroyed the northern half of the mountain and generated a massive pyroclastic surge, which killed more than 3500 people and destroyed dozens of villages. Survivors said "the smoke was seven miles high and the explosion was like an atom bomb or 1,000 block busters going off together" (Sydney Morning Herald, "N.G. DISASTER - DETAILS" 25 Jan 1958).

The administration was heavily accused of having ignored warnings and not reacted fast enough to prevent the scale of the disaster. The Melbourne Argus newspaper writes on its front page on 25 January 1951 "'.. they warned us too late'SAY WOMEN SURVIVORS" and reports some telephone interviews with survivors who felt that they had not been warned and informed in time. Similarly the Sydney Morning Herald's headline read "Delay in official warning criticised".
The strong demand for a public investigation of the tragedy was never granted by the administration. The District Commissioner, Mr. C. F. Cowley (who was killed during the eruption on Sunday) was quoted to have said a few days before the main explosion, "There is no loss of life nor is there any immediate danger." (Sydney Morning Herald, "N.G. DISASTER - DETAILS" 25 Jan 1958).
[plus d'info]
[cacher]
The main eruption was preceded by 5 days of minor activity observed since 15 January. People observed ash plumes, glowing volcanic bombs ejected, landslides and felt earthquakes. The government ignored these warnings and did not inform volcanologists nor suggest people to leave the area.
The paroxysmal phase of the eruption began at 10h40 local time on 21 January. Explosions generated a vertical eruption column that collapsed gravitationally into a fast-moving pyroclastic surge, that swept in all directions around the volcano. The surge, similar in its force to the lateral blast from Mt. St. Helens on 18 May 1980, d caused complete destruction in an area of 230 km2 and reached a maximum of 15 km distance to the north. Victims were found with their cloths stripped off by the force of the blast. At the Higaturu District Station, 10 km from Mt Lamington, a jeep was thrown into the trees and wedged between branches.
Australian geologist Taylor (1958), who studied the eruption in detail, identified an inner zone of total destruction, where the kinetic force and temperature of the pyroclastic flows causede total destruction, and an outer zone of partial destruction, where the kinetic energy of the flows had become less important and destruction was mainly due to the heat released by the surges.
Local topography influenced the effect and direction of the pyroclastic flows. Most went toward the northeast due to the geometry of the crater.
First visit to our site? If you havn't done it yet, download the Volcanoes & Earthquakes app to get one of the fastest volcano news online:
Android | IOS
Actualitées
jeu., 19 avril 2012, 06:56
Mt Lamington (Papua New Guinea) volcano: uncertain report about smoke and ash emission
According to setyoufreenews.com, Mt Lamington volcano in New Guinea is showing some signs of becoming active. According to the brief news, locals from the community of Popendetta reported "smoke and ash emission on March 25". No original source or other reports could be located so far to confirm new activity. Read all
mer., 24 avril 2002, 06:00
Lamington volcano (Papua New Guinea) - Smithsonian / USGS Weekly Volcanic Activity Report for 24 April-30 April 2002 (Continuing Activity)
Scientists from the Rabaul Volcano Observatory carried out a 4-day investigation at Lamington and concluded that there was no new volcanic activity. For the previous 3-4 weeks rumors had been circulating that Lamington was active, with reports of "fire" and "smoke" emanating from the volcano, felt earthquakes, and volcanic noises. ... Read all
Découvrez notre app gratuite !

See all major earthquakes in the past month
Ethiopia

Ethiopia and the Danakil
Ethiopia is a very diverse and beautiful country. Thanks to our numerous expeditions to Erta Ale and Dallol and beyond, we have an extensive collection of images showing the volcano's lava lake, the desert, the colorful hot springs of Dallol, the vast salt lakes, camel caravans and more.
Top 20 quakes

Largest 20 earthquakes past 24 hrs
Our continuously updated worldwide map and list of the most recent largest earthquakes in the world during the past 24 hours.
You can also find top 20 lists for given past days / months / years from the archive.
Volcano Calendar 2016

Éruption volcanique en Islande 2021
Une nouvelle éruption volcanique a commencé sur la péninsule islandaise de Reykjanes en mars 2021. Suivez les dernières actualités et mises à jour sur cet événement remarquable!
Why is there advertising on this site?
Support us - Help us upgrade our services!
We truly love working to bring you the latest volcano and earthquake data from around the world. Maintaining our website and our free apps does require, however, considerable time and resources.
We need financing to increase hard- and software capacity as well as support our editor team. We're aiming to achieve uninterrupted service wherever an earthquake or volcano eruption unfolds, and your donations can make it happen! Every donation will be highly appreciated. If you find the information useful and would like to support our team in integrating further features, write great content, and in upgrading our soft- and hardware, please make a donation (PayPal or Online credit card payment).