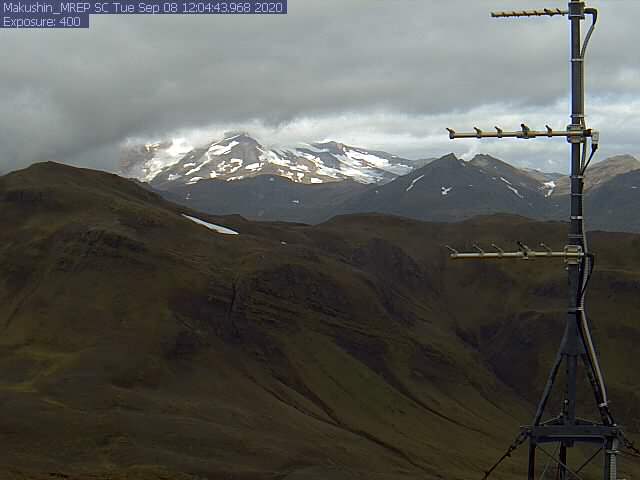 Makushin volcano yesterday (image: AVO)
The Alaska Volcano Observatory (AVO) reported that the seismicity at the volcano has been steadily declining for months, following an earthquake sequence that began on 15 June. Read all
Makushin volcano (Fox Islands, USA) - Smithsonian / USGS Weekly Volcanic Activity Report for 2 September-8 September 2020 (Continuing Activity)
mer., 2 sept. 2020, 06:00
Seismicity at Makushin returned to background levels after steadily declining for almost three months following a sequence of earthquakes about 10 km E of the summit at a depth of 8 km that had started on 15 June. AVO lowered the Aviation Color Code and Volcano Alert Level remained at Green and Normal, respectively, on 8 September. Read all
Montrer plus
Makushin (Aleutian Islands): Small earthquakes continue since last update
jeu., 30 juil. 2020, 21:21 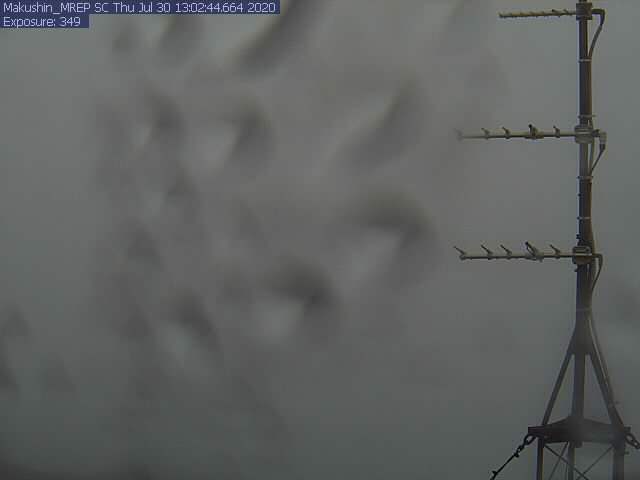 Cloudy Skies at Makushin volcano (C) U.S. Geological Survey
The Alaskan Volcano Observatory (AVO) report that the small earthquakes which began on June 15 continues. These earthquakes are located southeast of the summit. No activity was observed in cloudy satellite and web camera imagery. Read all
Makushin volcano (Fox Islands, USA) - Smithsonian / USGS Weekly Volcanic Activity Report for 15 July-21 July 2020 (New Activity / Unrest)
mer., 15 juil. 2020, 06:00
AVO reported that small earthquakes in an area about 10 km E of the Makushin's summit and at a depth of about 8 km continued to be detected during 15-21 July. Since the onset of seismicity on 15 June, the earthquakes had generally decreased in both size and rate. No surficial activity was visible in satellite or webcam images; only typical minor steaming from the summit crater lake. Read all
en haut
Makushin volcano (Aleutian Islands): fluctuating seismicity continues
mer., 1 juil. 2020, 06:18 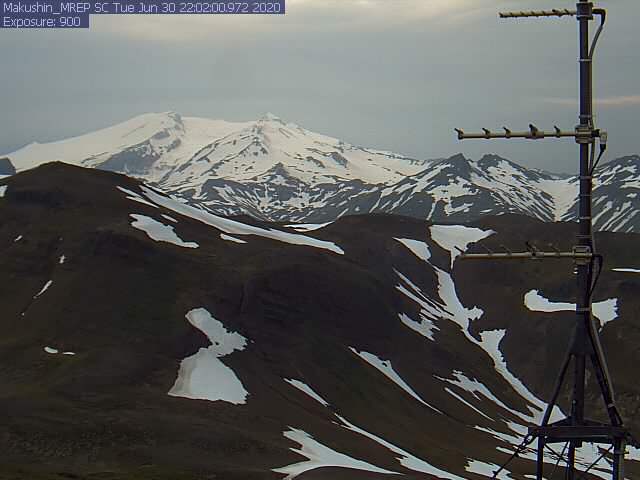 Makushin volcano today (image: AVO)
The Alaska Volcano Observatory (AVO) reported that the seismicity continues at fluctuating levels since 24 June. This is associated with two earthquakes on 28 June with magnitude M 3.0 and 3.8 at 16:53 and 18:02 local time. All of the earthquakes are clustered about 10 km (6 miles) east of the summit of the volcano at a depth of about 8 km (5 miles). The largest earthquakes have been felt strongly by residents of Unalaska. Read all
Makushin volcano (Fox Islands, USA) - Smithsonian / USGS Weekly Volcanic Activity Report for 24 June-30 June 2020 (New Activity / Unrest)
mer., 24 juin 2020, 06:00
AVO reported continuing numerous smaller earthquakes in an area about 10 km E of the Makushin's summit at a depth of about 8 km during 24-30 June; the frequency and magnitude had been declining since 15 June but the rate became variable on 24 June. No surficial activity was visible in satellite or webcam images; only typical minor steaming from summit crater lake. Earthquakes with a M 3 and M 3.8 were recorded at 1653 and 1802 on 28 June, with the larger event strongly felt in Unalaska (14 km E). Read all
Makushin volcano (Aleutian Islands): seismic unrest continues
jeu., 18 juin 2020, 07:31 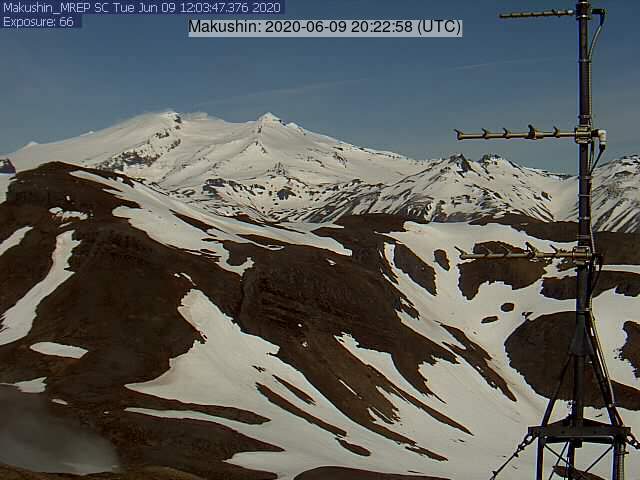 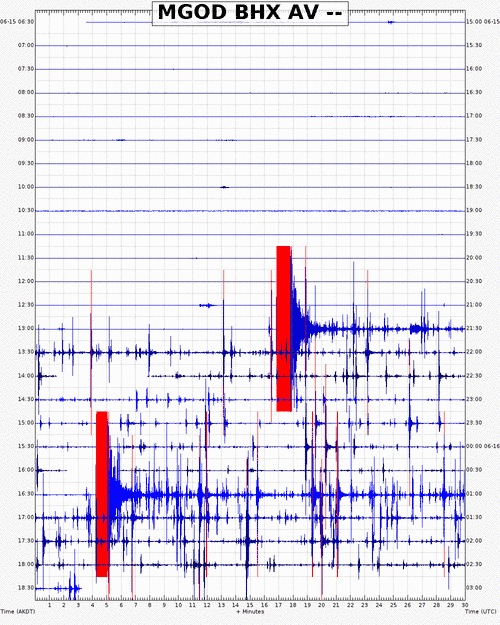 AVO webicorder showing the sudden increase in seismicity. Credit: AVO
The Alaska Volcano Observatory has raised the Alert Level and Aviation Color Code to ADVISORY/YELLOW due to an earthquake swarm that began a few hours ago with a M4.5 shock, soon followed by a M4.1 event. Both have been reported felt in Dutch Harbor/Unalaska.
Makushin volcano (Fox Islands, USA) - Smithsonian / USGS Weekly Volcanic Activity Report for 10 June-16 June 2020 (New Activity / Unrest)
mer., 10 juin 2020, 06:00
AVO reported that over a period of several hours on 15 June there were two earthquakes in the vicinity of Makushin that were greater than M 4 and one greater than M 3. The events were located about 11 km SE of the summit at a depth of about 8 km, and felt in Unalaska (14 km E). Numerous smaller earthquakes were recorded, though not felt by Unalaska residents. Read all
Montrer plus
Makushin volcano (Aleutian Islands) activity update
lun., 21 janv. 2013, 07:31 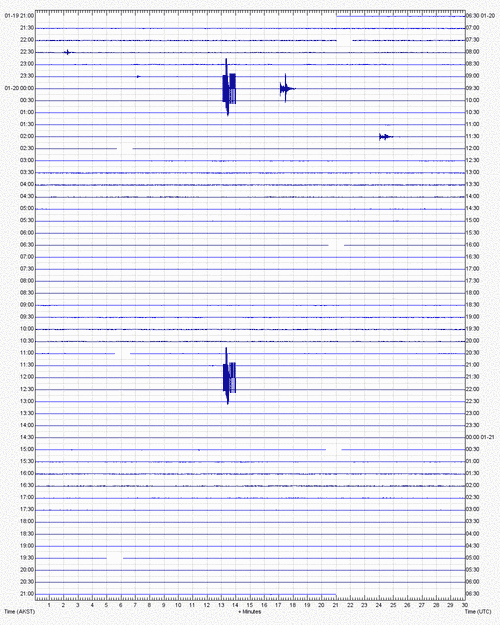 Current seismic recording at Makushin volcano (MSW station, AVO)
Occasional small local earthquakes have been recorded recently.
Makushin volcano (Fox Islands, USA) - Smithsonian / USGS Weekly Volcanic Activity Report for 30 May-5 June 2001 (New Activity / Unrest)
mer., 30 mai 2001, 06:00
Since July 2000 AVO has detected a slight increase in the number of small earthquakes beneath Makushin. The earthquakes generally ranged in depth between 0 and 8 km and were too small to be felt by humans (M0-1.5). The seismic activity was not considered to be an immediate precursor to eruptive activity. Read all
en haut
First visit to our site? If you havn't done it yet, download the Volcanoes & Earthquakes app to get one of the fastest volcano news online:
Android | IOS

Etna volcano photos
Etna - Europe's largest and most active volcano is a universe in itself. Browse through our collection spanning almost 20 years of eruptions and more.
Canary Islands

Kilauea volcano, Hawai'i
Kilauea is the most active volcano on earth, in constant eruption since 1983!
Fuego

Fuego volcano photos
One of Central America's most active volcanoes, Fuego in Guatemala is in near-permanent explosive eruption with intermittent phases of increasing activity that generate lava fountains, lava flows and pyroclastic flows.
Why is there advertising on this site?
Support us - Help us upgrade our services!
We truly love working to bring you the latest volcano and earthquake data from around the world. Maintaining our website and our free apps does require, however, considerable time and resources.
We need financing to increase hard- and software capacity as well as support our editor team. We're aiming to achieve uninterrupted service wherever an earthquake or volcano eruption unfolds, and your donations can make it happen! Every donation will be highly appreciated. If you find the information useful and would like to support our team in integrating further features, write great content, and in upgrading our soft- and hardware, please make a donation (PayPal or Online credit card payment).