Small ash eruptions occurred from Masaya volcano in late April, June, August and the rest of the year. An ash eruption on 29 April reached a height of 2.1 km altitude, 4.6 km on 9 October, and 5.3-6.1 km on 17 December.

Incandescence was seen from at the bottom of the inner pit crater at Santiago crater in 2003. Intermittent ash eruptions occurred between November 2003 and March 2005

2 small phreatomagmatic eruptions from the inner vent of Santiago crater were observed by volcanologists at Masaya volcano on 4 August 2006.
The activity was preceded by increased gas emissions starting the end of April 2006, with columns of gases rising ~ 100 m from the crater and producing jet-like sounds, strong sulfur smell and visible incandescence from the bottom of the crater.
During 21–23 October 2006, a new vent formed on the floor of Santiago crater and contained a small lava lake with intense degassing.
[plus d'info]
[cacher]
- Smithsonian / GVP monthly reports
- Pearson et al (2008) "Rapid response of a hydrologic system to volcanic activity: Masaya volcano, Nicaragua", Geology, v. 36 (12) pp. 951-954

At 14h23 on 23 April 2001, one of the largest eruptions of Masaya volcano in decades took many visitors on the easily accessible crater rim by surprise. 2 people were injured by falling bombs.
The explosion lasted 2 minutes and opened a new 10-m-diameter vent on the crater floor. Blocks of up to 60 cm in diameter were thrown up to 500 m outside the crater, including the parking area, where several cars were damaged. Several small bush fires were started by falling incandescent blocks. Small ashfall was reported near the settlement of Tecuantepe, 6 km NW of Masaya volcano.
Volcanologists who had been on the crater just one hour earlier did not notice anything unusual. It has been impossible to predict such sudden explosions until now.

Small explosions occurred from Santiago Crater on 17 November 1997 and 14 September 1998, ejecting lava bombs up to 50 cm in diameter onto the western rim. A 15-20 m wide vent at the bottom of Santiago Crater was observed glowing at night and emitting a constant gas plume, often accompanied by a characteristic sound similar to breaking waves.
Between November 1999 and January 2000, several small ash eruptions occurred.

A small Strombolian eruption was observed at Masaya volcano on 5 December 1996. There were ejections of bombs up to 10 cm, ash and some Pelee's hair. Some of the inner crater walls collapsed, partly closing the incandescent vent.

A new lava lake appeared in the bottom of Santiago crater in late June for the first time in 3 years, following a small ash eruption in the late afternoon of 16 April.
When observed on 20 June, the new vent with the lava lake was 7-8 m diameter and contained liquid lava splashing at a depth of about 30-40 m. Occasionally, lava fragments were ejected outside the vent. The lake slowly increased in diameter through the end of June, and was elongated NW-SE.
In August 1993, the lake was crusted over with a few openings where its incandescent interior could be seen.
In October, activity increased and produced a window in the lake's crust 15 m in diameter where lava could be seen splashing every 10-15 seconds.
The lava lake slowly cooled in late 1993 and 1994, but windows in its crust appeared from time to time.

A new lava lake appeared in Santiago's inner crater in February 1989 and disappeared again in March.
[plus d'info]
[cacher]
Geologists noted increased steam emissions and incandescent fissures on its SE vent walls on 12 February. Further fractures appeared and a collapse of the SE crater floor occurred on 19 Feb. A lava lake appeared at this location and was first observed on 20 Feb. It was about 5 m in diameter and increased to 30 m during the following night.
The lake produced intense lava fountaining (40 m high) in the center of the lava lake and the lake level fluctuated by 5-8 m over periods of about 10 minutes.
A report about its activity in late Feb writes "the lake area varied from hour to hour because of crusting, remelting, and collapse, averaging about 40 m2 and never exceeding about 100 m2 during that period. Small Strombolian eruptions from the lake surface were frequent. The maximum recorded brightness temperature of the lake was 1,148°C."
The lava lake disappeared again in March. The lava level had dropped significantly when observed since 7 March and debris falling on and covering the vent.
---
Source: Smithsonian / GVP monthly reports

A series of landslides and the formation of collapse pits occurred inside Santiago crater between 12 November 1986 and the end of the year. Such episodes are thought to correspond to falling magma levels inside the conduit of Masaya.
On 15 February 1987, a small explosion occurred in one of the pit craters, probably caused by gas pressure build-up under a tap of debris.
In 1988, Masaya was strongly degassing. There were a few small ash explosions and glow could be seen at the crater floor.

During 1983-85, Masaya's activity consisted in strong degassing from the cooling lava lake and occasional small ash explosions such as in April 1984, on 23 January 1985, and in April 1985.

A brief explosion occurred from the lava lake in Masaya's Santiago Crater occurred at dawn on 7 October 1982. The explosion ejected blocks up to 300 m outside to the SE. Bombs hit and killed a few treed and animals near the summit, and melted road asphalt. Rumbling and explosion sounds were heard through the day.

An explosion occurred from Santiago Crater lava lake in the early evening of 16 December 1981. Scoria up to 20 cm in diameter was found 200 m to the south of the crater rim.

In early 1978, the lava lake activity from Santiago crater increased. While the persistent lava lake inside the pit crater was usually not visible, splashes of lava could be observed. In late March, bursts of strombolian activity sometimes threw lava bombs to the height of the outer crater rim.

On 4 and 5 April 1970, 2 small lava flows were observed on the surface of the old lava lake inside Santiago crater. 2 explosions were reported from 4 and 5 April.
First visit to our site? If you havn't done it yet, download the Volcanoes & Earthquakes app to get one of the fastest volcano news online:
Android | IOS
Actualitées
jeu., 24 oct. 2019, 10:43 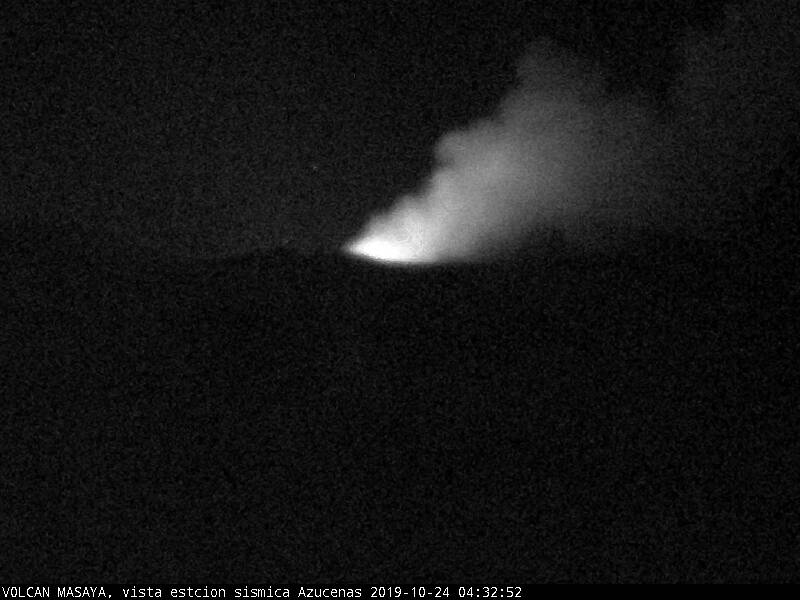 Earthquakes by Lat/Lon
Look up recent and past quakes worldwide or by selecting an area on the map!
Canary Islands