(stratovolcan 2280 m / 7,480 ft)
Volcán Ceboruco is the only historically active volcano in the NW part of the Mexican Volcanic Belt. It is located near the triple junction between the North American, Cocos and Pacific tectonic plates.
Ceboruco is a complex stratovolcano that rises 1100 m above the flat f... [informations] 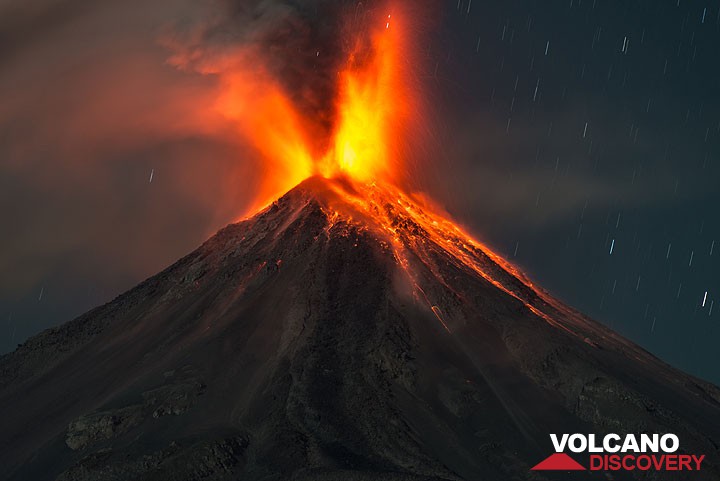 Strong explosion at Colima volcano in Feb 2015
Colima volcano is one of the most active volcanoes in North America and one of the potentially most dangerous ones. It has had more than 30 periods of eruptions since 1585, including several significant eruptions in the late 1990s. Scientific monitoring of the volcano began 20 ye... [informations]

(champ volcanique 2075 m / 6,808 ft)
Durango volcano is a volcanic field in north-central Mexico north of the city of Durango, located at the NW end of the Meseta Central and the eastern edge of the Sierra Madre Occidental. The volcanic field covers 2100 sq km and contains about 100 maars, cinder cones and lava flow... [informations] 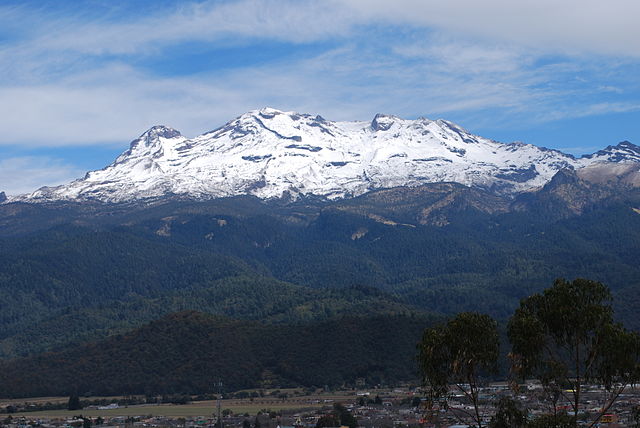 Iztaccihuatl volcano as seen from the Sacromonte mountain in Amecameca, Mexico State (image: Wikimedia Commons, AlejandroLinaresGarcia)
Iztaccíhuatl volcano (also spelled Ixtaccíhuatl) is a massive andesitic stratovolcano next to the famous neighbor Popocatépetl volcano. It is the 3rd highest mountain of Mexico.
Iztaccíhuatl has the profile of a sleeping woman when seen from the Valley of Mexico, which gave... [informations]

(Stratovolcano 3900 m / 12,795 ft)
Jocotitlán volcano is an isolated stratovolcano located 60 km WNW of Mexico City and 50 km N of of Toluca volcano. It rises about 1300 m above the Toluca plain and has a large horse-shoe shaped escarpment open to the NE, which formed because of gravitational flank collapse, simil... [informations]

(stratovolcan 4461 m / 14,636 ft)
La Malinche is a Pleistocene andesitic-dacitic stratovolcano in the eastern Trans Mexican Volcanic Belt located only 25 km from the city of Puebla. La Malinche is heavily eroded and probably in in its final stages of activity, but could still erupt in the future, in which case it... [informations]

(stratovolcan 3940+ m / 12,926 ft)
Las Cumbres volcano is a stratovolcano in central-eastern Mexico in Puebla state about 190 km SE of Mexico City and only 15 km NNE of Pico de Orizaba volcano.
It is part of the 70 km N-S trending Citlaltépetl–Cofre de Perote Volcanic Range.
The volcano contains a a 4... [informations]

(volcan bouclier 800 m / 2,625 ft)
Los Atlixcos (Cerro el Abra) volcano is located at the eastern end of the Mexican Volcanic Belt along the Gulf of Mexico, about 80 km NW of the city of Veracruz. It is a young a shield volcano topped by 2 large cinder cones and associated lava fields, both called Cerro los Atlixc... [informations]

(caldeira 3400+ m / 11,155 ft)
Los Azufres volcano is a large Pleistocene caldera and volcanic complex in central Mexico located about 200 km NW of Mexico City.
It is one of several volcanic complexes north of the axis of the Trans-Mexican Volcanic Belt and still has a very active geothermal system with... [informations]

(cinder cones 2560 m / 8,399 ft)
Mascota is a volcanic field in western Mexico near the town of Mascota. It covers about 2000 sq km and has 87 small cinder cones and lava flows.
The youngest volcanic activity took place at Volcán Malpaís north of Mascota and produced a basaltic-andesite lava flow probably ... [informations]

(pyroclastic cones 2000+ m / 6,562 ft)
Naolinco volcano is a field of young cinder cones in the Sierra de Chiconquiaco range north of Jalapa (Xalapa), Veracruz, near the town of Naolinco, 35 km from the Gulf of Mexico.
The largest cone is Cerro Acatlán NE of Naolinco de Victoria. This and other nearby cones hav... [informations]

(lava dome 3600+ m / 11,811 ft)
Papayo volcano is a small lava dome on the crest of the Sierra Nevada range 47 km SE of Mexico City. Papayo has produced large dacitic lava flows reaching up to 10 km length, and was last active less than 12,000 years ago, meaning it is to be considered potentially active. [informations]

(Stratovolcano 5675 m / 18,619 ft)
Pico de Orizaba volcano (Volcán Citlaltépetl) is a large active stratovolcano, Mexico's highest mountain and the highest volcano of North America. It is located at the southern end of Citlaltépetl–Cofre de Perote Volcanic Range, and the only volcano in this area with historic act... [informations]

(Stratovolcano 5426 m / 17,802 ft)
Popocatepetl is one of Mexico's most active volcanoes. After almost 50 years of dormancy, "Popo" came back to life in 1994 and has since then been producing powerful explosions at irregular intervals.
In the past centuries befor European invasions, large eruptions produced ... [informations]

(Shield volcano 1650 m / 5,413 ft)
San Martín volcano (Volcan de San Martín Tuxtla) is a broad basaltic shield volcano that rises above the Gulf of Mexico, and is part of the Tuxtla volcanic field. It has a 1 km wide summit caldera containing 2 smaller scoria cones which formed during the violent 1793 summit erupt... [informations]

(stratovolcan 2340+ m / 7,677 ft)
Sangangüey volcano is an eroded andesitic and dacitic stratovolcano stratovolcano 50 km from the west coast of Mexico. It is the highest volcano in the NW-SE-trending Tepic-Zacoalco graben.
Sangangüey contains a prominent lava spine at the summit and has 45 cinder cones on ... [informations]

(caldeira 3500+ m / 11,483 ft)
Zitácuaro-Valle de Bravo volcano is a volcanic field in the central part of the Mexican Volcanic Belt 80 km SW of Mexico City. It consists of the Zitácuaro complex which formed above the giant, 30 km wide Las Tres Chicas caldera near city of Heroica de Zitácuaro, and the Valle de... [informations]
First visit to our site? If you havn't done it yet, download the Volcanoes & Earthquakes app to get one of the fastest volcano news online:
Android | IOS

Volcano Trip
Guatemala is a country with spectacular volcanic activity, wonderful landscapes, colorful villages and towns, friendly people.
Join a trip organized by an experienced Guatemalan guide and photographer Diego Rizzo together with VolcanoDiscovery to have a chance to watch the active volcanoes (Fuego and Pacaya) from up close! Get an in-depth experience of the powerful and turbulent natural processes at work and take stunning pictures!
Calendars

Volcano Calendars
We have published several volcano calendars over the years: usually, we use photos taken by us or our participants during our recent volcano tours and expeditions. A perfect gift if you're a fan of volcanoes!
Find Quakes

Find an earthquake
Look up quakes anywhere in the world, near your city or region!
Feedback

"Thank you very much for the formidable trip!"
Read what our clients have said about us and our tours!
Why is there advertising on this site?