(stratovolcan 2248 m / 7,375 ft)
Bamus volcano (also known as South Son, Ulawun being the father) is a symmetrical stratovolcano SW of Ulawun volcano, 16 km inland from Stettin Bay.
The volcano is thickly covered by rainforest and fern thickets. The last confirmed activity of Bamus was around 1888, as vil... [informations]

(stratovolcan 1155 m / 3,789 ft)
Bola volcano (or Mt. Wangore) is a symmetrical steep stratovolcano that forms the highest point on the Willaumez Peninsula in New Britain.
There are no known recent eruptions, but the fresh morphology of the summit crater suggests that the last activity was only a few hund... [informations]

(pyroclastic cone 311 m / 1,020 ft)
Buru volcano is a partly preserved cinder cone which rises 250 m above the surrounding swamps. it is located SW of Pago and SE of Oto.
The volcano is named after the Buru river on the south side of the volcano. To the north is a swampy depression called the Buru caldera. [informations]

(caldeira 400+ m / 1,312 ft)
Dakataua volcano is a large caldera on the northern end of Willaumez Peninsula, New Britain. The elliptical caldera, 13.5 km E-W and 10.5 km N-S, is one of New Britain's most impressive volcanoes. The caldera contains the 12 km wide horseshoe-shaped Lake Dakataua which is at only... [informations]

(stratovolcan 368 m / 1,207 ft)
Garove volcano forms the 12 km long and low Garove Island, the largest of the Witu Island group located 40 miles (65 km) north of New Britain Island in the Bismarck Sea.
Garove volcano has a 5 km wide flooded caldera open to the sea through a narrow breach on the southern s... [informations]

(stratovolcan 1148 m / 3,766 ft)
Hargy volcano (also referred to as Eve, Galloseulo, Ibi, Richthofen, Gallosculo) is a little-known volcano in eastern New Britain, but it has one of New Britains's largest calderas, which measures 12 x 10 km.
There are no known historic eruptions and the last activity has ... [informations]

(stratovolcans 610 m / 2,001 feet (Mt. Malopu) (Karai cone: 565 m))
Karai volcano is the highest volcano in the Sulu Range in north-central New Britain off Bangula Bay.
The Sulu Range consists of a cluster of partially overlapping small stratovolcanoes and lava domes.
There are no historic eruptions, but in 2006, a vigorous new fumaro... [informations]

(stratovolcan 1330 m / 4,363 ft)
Langila volcano is one of the most active volcanoes in the Bismarck Arc of New Britain. It is located 11 km south of Cape Gloucester.
The volcano consists of a group of 4 small overlapping basaltic-andesitic cones on the lower eastern flank of extinct Talawe volcano, which ... [informations]

(stratovolcan 805 m / 2,641 ft)
Lolo (also known as Auwers) volcano is a small andesitic stratovolcano 13 km north of Pago volcano in New Britain.
It has a nearly symmetrical shape with steep 35 deg upper slopes above 300 m elevation, and lower more gently inclined 20 deg slopes at its base between 150 a... [informations]

(volcan complexe 179 m / 587 ft)
The Mundua Islands are the peaks of several basaltic volcanoes which form Mundua, Wingoru, Garove, and Narage islands.
The largest volcano forms the westerm tip of the 7 km long Mundua island and Wingoru island immediately to the west. It is located 85 km NW of Willaumez Pe... [informations]

(stratovolcan 307 m / 1,007 ft)
Narage volcano forms a small volcanic island 32 km WNW of Garove Island, north of western New Britain. It is the northernmost of the Witu (Vitu) Islands.
Although the volcano may be extinct, there is vigorous hydrothermal activity. Narage has hot springs and geysers, mainly... [informations] 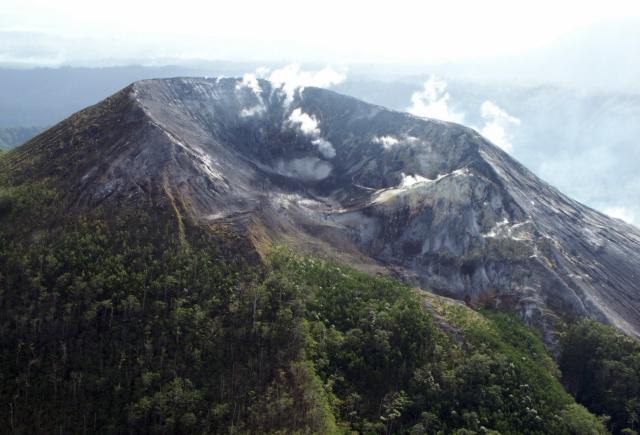 A close-up photo of Pago's ravaged summit crater taken from the N on 16 September 2002. (Photo: USGS)
Pago volcano (Witori volcano) is located in the Cape Hoskins area of New Britain, Papua New Guinea. It belongs to the larger complex of Witori volcano and represents the post-caldera cone of the latter.
Pago is probably only 350 years old.
The typical historical act... [informations] 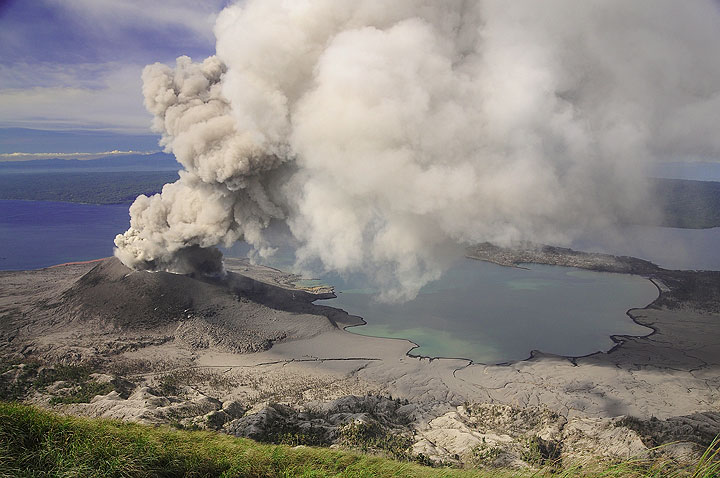 Eruption of Tavurvur volcano (Rabaul caldera) (Photo: Paul Nicholsn)
Rabaul volcano is one of the most active and most dangerous volcanoes in Papua New Guinea.
Rabaul exploded violently in 1994 and devastated the lively city of Rabaul. Since then, the young cone Tavurvur located inside the caldera has been the site of near persistent activit... [informations]

(caldeira 200? m / 656 feet)
Tavui is a large, mostly submerged caldera offshore from east New Britain, Papua New Guinea. It has impressive 1000 m cliffs at a location called Submarime Base, a popular diving spot in New Britain.
The volcano was last active about 7000 years ago and might still be consi... [informations]

(stratovolcan 2334 m / 7,657 ft)
Ulawun (also locally known as the "father" //commemt: Bamus being the "son") is a symmetrical large stratovolcano on New Britain Island. It rises majestically above the north coast of New Britain across a low saddle NE of Bamus volcano, the South Son.
Ulawun is one Papua N... [informations]

(Volcan sous-marin unknown)
An unnamed seamount is located 30 km NNE of Cape Gloucester on the NW tip of New Britain. It is probably an active submarine volcano and the most likely source of an unconfirmed submarine eruption report during 1983. An earthquake swarm accompanied the event. Local inhabitants he... [informations]

(Volcan sous-marin unknown elevation)
There are 2 uncertain reports of submarine eruptions off Cape Hollman NW of Lolobau Island and east of Garove Island during 1951 and 1970, but cannot be definitively attributed to volcanic origin. [informations]

(hydrothermal field 30 m / 98 ft)
Walo volcano is not actually a volcano, but a geothermal field 5.5 km from Walo village, Bangula Bay on the north coast of New Britain. There are no exposed volcanic rocks, but it contains fumaraoles and hot springs.
The Walo thermal area is connected to the nearby Sulu Ra... [informations]
First visit to our site? If you havn't done it yet, download the Volcanoes & Earthquakes app to get one of the fastest volcano news online:
Android | IOS

RVO reported that at 0820 on 2 June a small eruption at Ulawun produced dense gray ash plumes that rose about 3 km above the summit and drifted NW. The elevated activity lasted 10-15 minutes. Minor ashfall was reported in areas downwind, including in Ulamona Mission and on Lolobau Island. ... Read all
mer., 1 juin 2022, 23:45 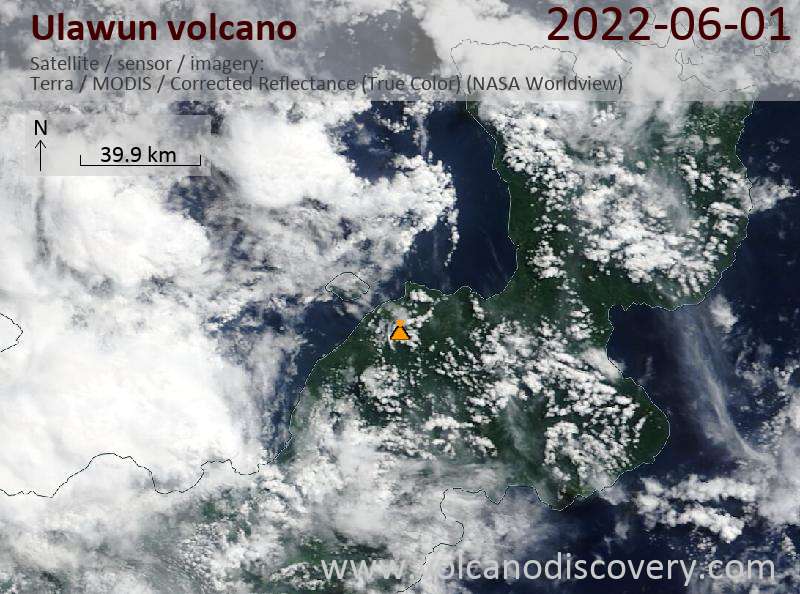 RVO reported that at 0820 on 2 June a small eruption at Ulawun produced dense gray ash plumes that rose about 3 km above the summit and drifted NW. The elevated activity lasted 10-15 minutes. Minor ashfall was reported in areas downwind, including in Ulamona Mission and on Lolobau Island. ... Read all
mer., 1 juin 2022, 23:45

Exploring the unknown
We sometimes invite you to "test" new itineraries or destinations with us. Such trips are a reduced cost and require a higher degree of flexibility, but often offer a great deal of adventure.
Volcano Stats

Statistics on active volcanoes
Find out which volcanoes erupted in a given year or month!
La Palma volcano

Eruption 2021 photos
Look at pictures from the spectacular volcanic eruption on La Palma Island during Sep-Oct 2021, sorted and annotated in chronological order!
Eyjafjallajökull

Eyjafjallajökull volcano photos
The volcano in Iceland with the unpronounceable name... but famous in 2010 when its ash clouds drifted over Europe and forced a unprecedented large-scale airspace closure for several days, stranding millions of passengers.
Volcanoes in Africa

List and map of all volcanoes in Africa. Most volcanoes are located in the Great Rift Valley, but there are more.
Why is there advertising on this site?