(pyroclastic shield 518 m / 1,699 ft)
Apoyeque volcano forms the broad Chiltepe Peninsula in western Nicaragua and extends into south central Lake Managua
The Apoyeque volcano is part of a larger volcanic complex and consists of a low 500 m high shield cut by a 2.8 km wide and 400 deep lake-filled caldera and a... [informations]

(stratovolcan 603 m / 1,978 ft)
Cerro el Ciguatepe volcano is located in the Nicaraguan interior highlands, east of the Nicaraguan depression and one of several Quarternary volcanoes in this area.
It contains a well-reserved 1.5 km wide summit crater, which contains a blocky lava dome and a young lava fl... [informations]

(cinder cones 728 m / 2,388 ft)
Cerro Negro, Central America's youngest volcano was born in April 1850 and is one of the region's most active volcanoes. It has been producing frequent strombolian eruptions, occasional lava fountains and lava flows, and powerful explosive eruptions every few decades.
Cerro... [informations]

The steep stratovolcano Conception in January 2012 (photo: Antony / www.facebook.com/antony.van)
Concepción volcano is a steep symmetrical stratovolcano with a perfect shape and one of the most active volcanoes of Nicaragua. During the past 100 years, it has been in a near-constant state of small to medium ash explosions at irregular intervals.
Together with its neighb... [informations]

(stratovolcan 872 m / 2,861 ft)
Cosigüina (or Cosegüina) volcano in western Nicaragua forms a large peninsula into the Gulf of Fonseca. The last eruption of the volcano was in 1959, but periods of unrest have occurred in recent years and in 1835, it produced the largest known historic eruption in Nicaragua.

(champ volcanique 899 m / 2,949 ft)
Esteli volcano is a group of young fissure vents, cones and lava flows located 36 km south of Honduras in the northern interior highlands between the town of Estelí and the border. The volcanic center is not on the main volcanic front of Nicaragua, but 70 km NE of the main volcan... [informations]

(fissure vents 300+ m / 984 ft)
Granada volcano is a system of N-S trending fissure vents, cinder cones and craters located in western Nicaragua between the city of Granada (the oldest city founded by Europeans on the American continent) on the northwestern shore of Lake Nicaragua and the northern flanks of Mom... [informations]

(volcan bouclier 926 m / 3,038 ft)
Las Lajas is a basaltic shield volcano 20 km north of Lake Nicaragua. La Lajas is the youngest of a group of volcanoes east of the Nicaraguan graben. Based on its fresh morphology, it could be still active.
Las Lajas volcano has a 7 km wide and 650 m deep caldera, which co... [informations]

(champ volcanique 1088 m / 3,570 ft)
Las Pilas volcano is a volcanic complex near Cerro Negro volcano 75 km NW of the capital Managua.
The volcano consists of several cones around the central vent, Las Pilas, which contains a 700 m wide and 120 m deep crater and is the site of the recent activity.
El Ho... [informations]

(stratovolcan 1394 m / 4,573 ft)
Maderas volcano is a basaltic to dacitic stratovolcano on the SE end of Ometepe island in Lake Nicaragua. It has a a 800 m wide summit crater which contains the small lake Laguna de Maderas at the bottom.
Maderas is still active, but the latest activity dates back more than... [informations]

(caldeira 635 m / 2,083 ft)
Masaya volcano 25 km SE from Managua is one of Nicaragua's most active and usual volcanoes.
In contrast to most other volcanoes in subduction zones, it has been erupting mainly fluid basaltic lava. At the time of the Spanish Conquistadors, it contained an active lava lake ... [informations]

(stratovolcan 1344 m / 4,409 ft)
Mombacho volcano is an active andesitic and basaltic stratovolcano located about 10 km south of the city of Granada, west of Lake Nicaragua and a few kilometers SE of Laguna Apoyo.
A possible historic eruption occurred in 1570, when a debris avalanche destroyed a village on... [informations]

(stratovolcan 1297 m / 4,255 ft)
Momotombo volcano is a symmetrical stratovolcano rising as a peninsula above the NW part of Lake Managua, Nicaragua. It is one of the most known volcanoes of the country.
Momotombo is located at the SE end of the Marrabios Range. It consists of the remnant of an older volca... [informations]

(fissure vents 360 m / 1,181 ft)
Nejapa-Miraflores volcano is an alignment of fissure vents, maars and cinder cones extending from Lake Managua until the western part of Managua city.
About 40 eruptions have occurred from this system during the past 30,000 years, and the most recent one produced Asososca ... [informations]

(stratovolcan 832 m / 2,730 ft)
Rota (also known as Orota) volcano in Nicaragua is located between the more active Cerro Negro and Telica volcanoes in the central Marrabios Range. It is a symmetrical stratovolcano truncated by a 1 km wide circular crater.
There are no recent eruptions from Rota, and the c... [informations]

(stratovolcan 1745 m / 5,725 ft)
San Cristobal volcano, also known as El Viejo, is the highest and one of the most active volcanoes in Nicaragua. It is located near the northwest corner of the country near the city of Chinandega, 110 km WSW of the capital Managua.
San Cristobal has had frequent small to m... [informations] 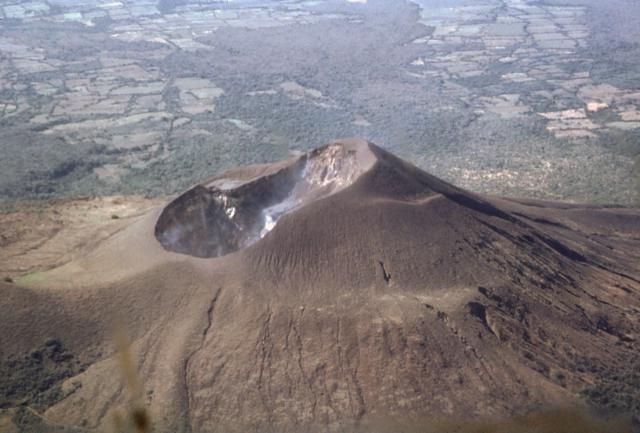 Note: There is another informations]

(volcan bouclier 629 m / 2,064 ft)
Zapatera volcano is a low shield volcano forming a 7 x 10 km wide densely forested island on the western part of Lake Nicaragua. The island is located opposite Mombacho volcano and separated by a narrow strait from the mainland.
Zapatera volcano... [informations]
First visit to our site? If you havn't done it yet, download the Volcanoes & Earthquakes app to get one of the fastest volcano news online:
Android | IOS 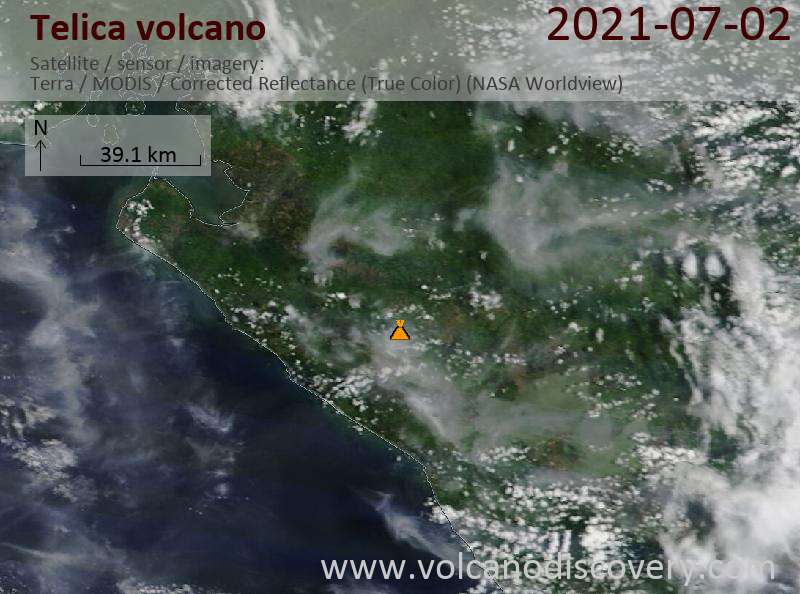 Small spherical balls of volcanic ash that form from a wet nucleus falling through a volcanic ash cloud.
Volcano Stats

Statistics on active volcanoes
Find out which volcanoes erupted in a given year or month!
Largest volcano

Do you know which is the biggest volcano in the world?
Volcano Tours

Tours to active volcanoes
Watching a volcanic eruption is one of the most impressive natural displays. We have a wide selection of tours to active volcanoes worldwide at different activity and difficulty levels.
Why is there advertising on this site?
Support us - Help us upgrade our services!
We truly love working to bring you the latest volcano and earthquake data from around the world. Maintaining our website and our free apps does require, however, considerable time and resources.
We need financing to increase hard- and software capacity as well as support our editor team. We're aiming to achieve uninterrupted service wherever an earthquake or volcano eruption unfolds, and your donations can make it happen! Every donation will be highly appreciated. If you find the information useful and would like to support our team in integrating further features, write great content, and in upgrading our soft- and hardware, please make a donation (PayPal or Online credit card payment).