9 March: At around 15:30, the summit activity ceases and a new effusive vents opens on the Sciara at about 500 m elevation, feeding a vicous lava flow (see previous photo page).
During the following hour, a strange phenomenon is observed about 8-10 times: streaks of rolling clouds of white vapour and brown dust clouds appear on the Sciara along a straight line beneath the new vent. These clouds move steadily downslope for hundreds of meters. Each is more intense than the preceding one and propagates further downslope, almost reaching the shore.  Lacking a video camera, we've put together several still pictures taken at 0.2 second distance during several such episodes. Is this mark a new fracture cutting across the Sciara del Fuoco caused by the instrusion of new lava or a movement of a large block of the Sciara itself?
This phenomenon lasted for about 1 hour only, but became more and more vigorous. Towards the end of this period, we also observed another, inquieting thing: brown clouds of dust were whirled up by something happening on the Sciara in the sector hidden behing the crest of the Sciara at our side and next to the other lava flow. Was this a parallel fracture opening up here as well, thus cutting a huge slice into the Sciara? We can only guess... Later on, rockfalls from the front of the new lava flow, as well as seemingly movements along what we believe might be a a new opening fracture turned loose material into small pyroclastic flows (see next photo page). After about 6:30pm, both pyroclastic flows and the appearance of these white and brown steam and dust clouds ceased. 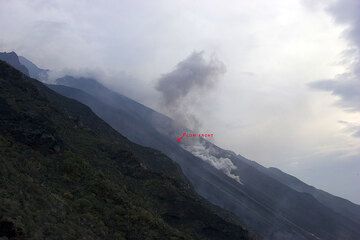 Coulds of vapour and dust whirled up from a line below the flow front, perhaps by a propagation of the fracture downhill. 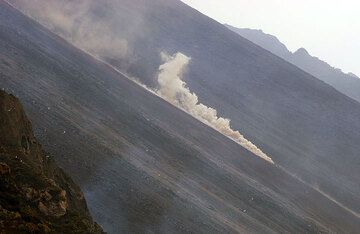 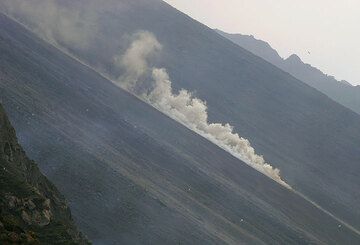 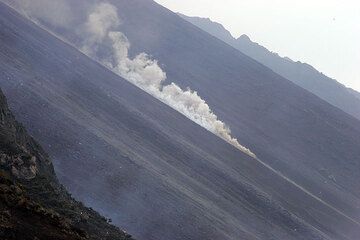 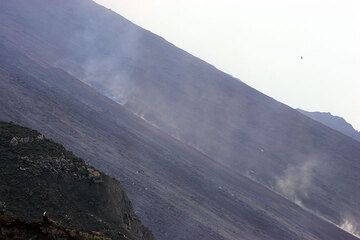 Volcanic crisis at Sakurajima - updates
A strong earthquake swarm and increased inflation were detected in August 2015 and triggered authorities to raise the alert level, as volcanologists think that a larger eruption could follow. News and updates on the events can be found on this page.
Quakes Near You

Find quakes in your area
Look up quakes near your current or any other location of interest worldwide!
Lava flows

Find an earthquake
Look up quakes anywhere in the world, near your city or region!
Mises à jour de l'Etna