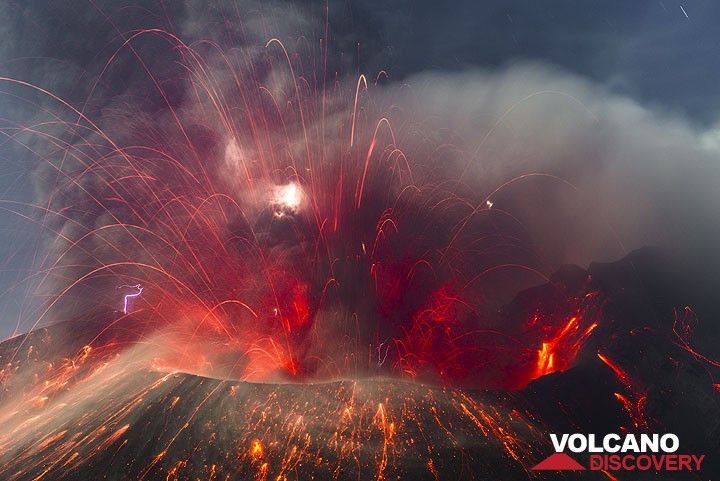 « Précédent · Suivant »
Sakurajima, Japan, July 2013: The largest explosion observed from close occurred at 23h33 (14:33 UTC) - although the eruption was not mentioned in Tokyo's VVAC, the ash plume was the at least as large as the larger ones previously observed. The eruption lasted more than 2 minutes, starting with an initial explosion and continuous lava and ash fountains afterwards. The plume darkened the sky of the whole eastern area for the rest of the night. (Photo: Tom Pfeiffer)
Miniatures↑ · ↑↑Liste Galeries
Droit d'auteur: Tom Pfeiffer / www.volcano-photo.com
Contact: Email
File: sakurajima_j00722.jpg | Hits
Découvrez notre app gratuite !

Volcano Calendars
We have published several volcano calendars over the years: usually, we use photos taken by us or our participants during our recent volcano tours and expeditions. A perfect gift if you're a fan of volcanoes!
Volcano Map

Map of currently active volcanoes
See which volcanoes are erupting at the moment! Probably more than you think...
Top 20 quakes

Largest 20 earthquakes past 24 hrs
Our continuously updated worldwide map and list of the most recent largest earthquakes in the world during the past 24 hours.
You can also find top 20 lists for given past days / months / years from the archive.
Notre nouveau livre

Volcano Discoveries
"One of the most eye-catching guides to the world's volcanoes ever published."
AllQuakes