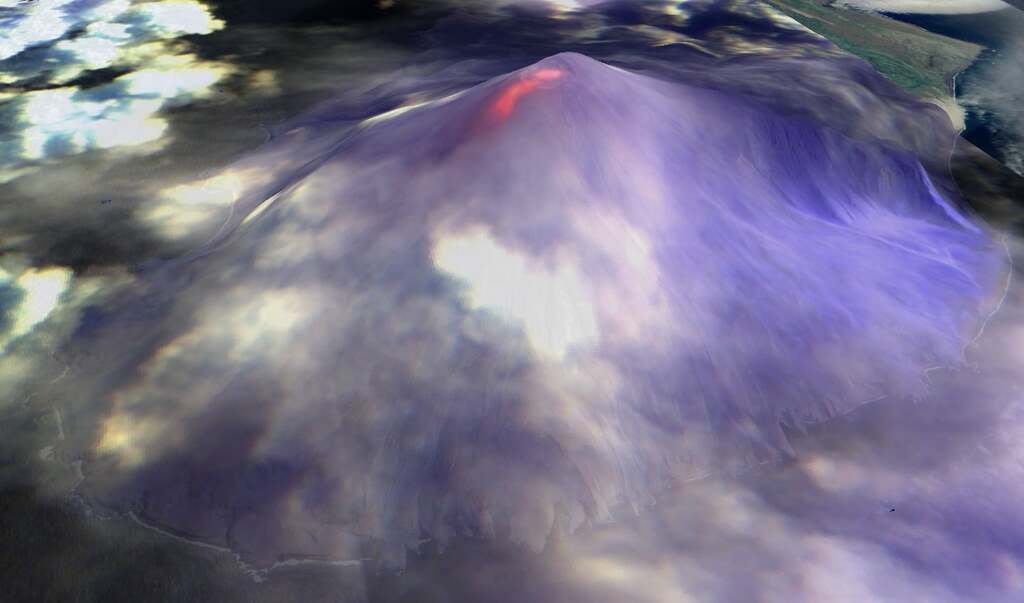 Red arrow shows a higher surface temperature at Sarychev peak yesterday. Visibility is limited due to dense clouds (image: Sentinel 2)
Activity of the volcano continues at elevated levels. Read all
en haut
Sarychev Peak volcano (Matua Island, Russia) - Smithsonian / USGS Weekly Volcanic Activity Report for 6 January-12 January 2021 (New Activity / Unrest)
mer., 6 janv. 2021, 06:00
KVERT raised the Aviation Color Code to Yellow (the second lowest level on a four-color scale) for Sarychev Peak on 10 January, noting that the temperature of a thermal anomaly was 79.8 degrees Celsius above background temperatures, possibly indicating lava in the crater. Read all
First visit to our site? If you havn't done it yet, download the Volcanoes & Earthquakes app to get one of the fastest volcano news online:
Android | IOS

Raung volcano photos
One of the largest and most active volcanoes in East Java, rarely-visited and relatively unknown Raung became (in)famous during its recent eruption in 2015 when its frequent ash plumes forced the repeated closure of Bali's airport.
Bromo

Bromo volcano photos
Bromo is one of Indonesia's most visited volcanoes. It is the most active vent inside the huge Tengger caldera and erupts every few years.
Ijen

Ijen volcano photos
Ijen volcano in East Java is famous for its turquoise acid crater lake and the large sulfur deposits that are being mined by local workers. At night, the scene is illuminated by ghostly blue flames, as sulfur ignites.
Chile 7-16 Dec 2020

Solar Eclipse & volcano tour
A total solar eclipse will occur on 14 Dec 2020 and pass over southern Chile and Argentina. Chile's most active volcano Villarrica is located exactly on the center line where the eclipse will be best to observe.
We offer you the unique chance to combine the eclipse with a tour to one the world's most beautiful volcanic areas - the Lake District in Chile.
Krakatoa video

Krakatoa explodes
In the afternoon of 17 Oct, a particularly violent explosion occurred at Anak Krakatau, blasting away a portion of the southern crater rim. A similar event might have been the final trigger for the catastrophic landslide that let the cone collapse and cause a devastating tsunami on 22 Dec 2018.
Why is there advertising on this site?
Support us - Help us upgrade our services!
We truly love working to bring you the latest volcano and earthquake data from around the world. Maintaining our website and our free apps does require, however, considerable time and resources.
We need financing to increase hard- and software capacity as well as support our editor team. We're aiming to achieve uninterrupted service wherever an earthquake or volcano eruption unfolds, and your donations can make it happen! Every donation will be highly appreciated. If you find the information useful and would like to support our team in integrating further features, write great content, and in upgrading our soft- and hardware, please make a donation (PayPal or Online credit card payment).