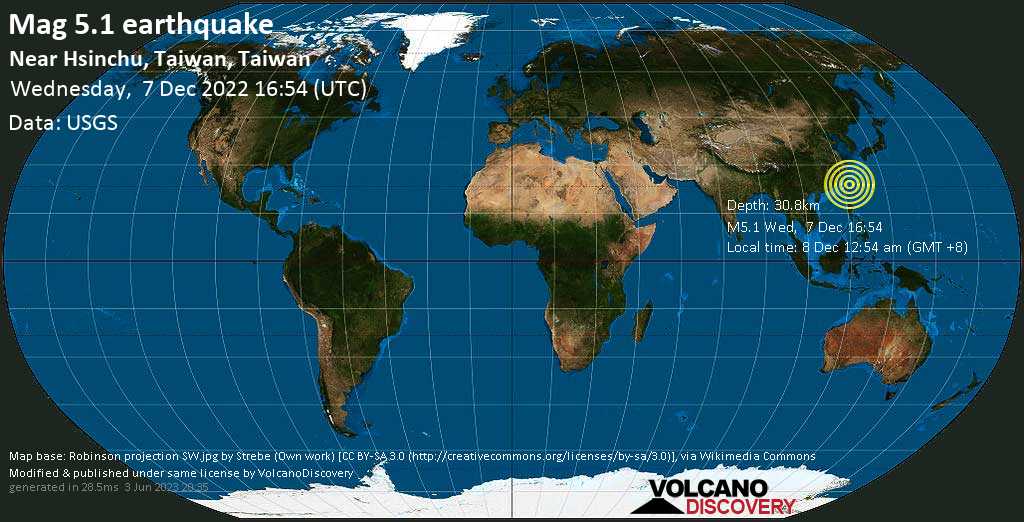 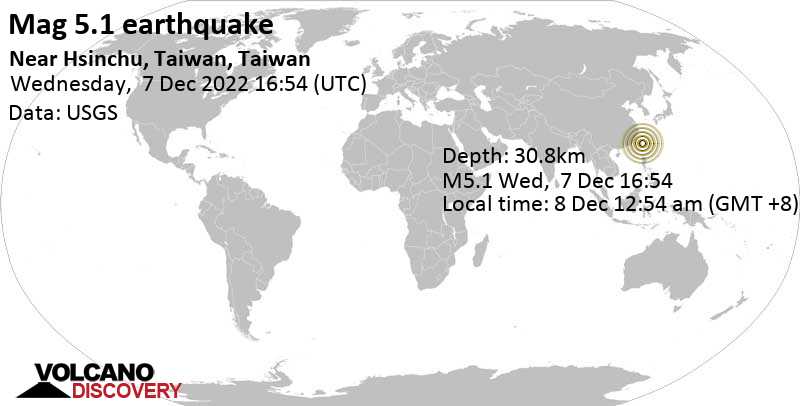 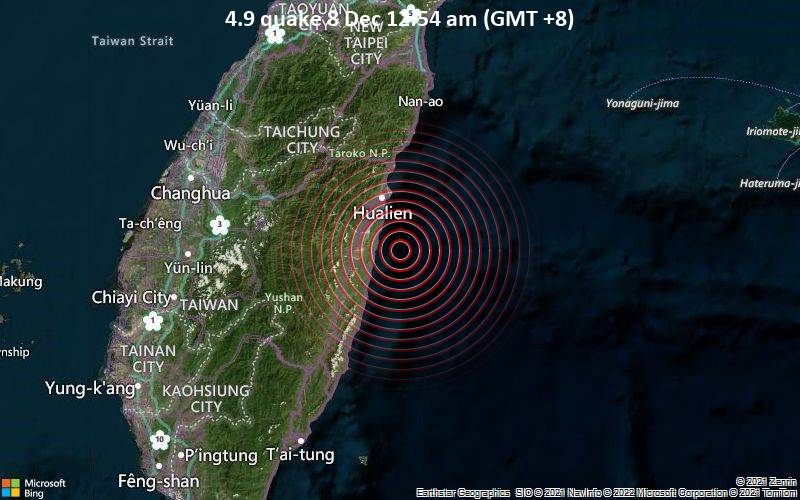 4.9 quake 8 Dec 12:54 am (GMT +8)
An earthquake of magnitude 4.9 occurred only 18 minutes ago 30 km southeast of Hualien City, Taiwan, the German Research Centre for Geosciences (GFZ) reported.
The quake hit at a shallow depth of 14 km beneath the epicenter near Hualien City, Hualien, Taiwan, after midnight on Thursday, December 8th, 2022, at 12:54 am local time. The exact magnitude, epicenter, and depth of the quake might be revised within the next few hours or minutes as seismologists review data and refine their calculations, or as other agencies issue their report.
A second report was later issued by France's Réseau National de Surveillance Sismique (RéNaSS), which listed it as a magnitude 5.4 earthquake. A third agency, the European-Mediterranean Seismological Centre (EMSC), reported the same quake at magnitude 5.3.
Based on the preliminary seismic data, the quake was probably felt by many people in the area of the epicenter. It should not have caused significant damage, other than objects falling from shelves, broken windows, etc.
In Hualien City (pop. 350,500) located 30 km from the epicenter, the quake should have been felt as light shaking.
Weak shaking might have been felt in Puli (pop. 86,400) located 78 km from the epicenter, Lugu (pop. 19,600) 96 km away, and Nantou City (pop. 105,700) 107 km away.
Other towns or cities near the epicenter where the quake might have been felt as very weak shaking include Taichung (pop. 1,040,700) located 113 km from the epicenter, Yilan (pop. 94,200) 116 km away, Yuanlin (pop. 124,700) 116 km away, and Douliu (pop. 104,700) 117 km away.
VolcanoDiscovery will automatically update magnitude and depth if these change and follow up if other significant news about the quake become available. If you're in the area, please send us your experience through our reporting mechanism, either online or via our mobile app. This will help us provide more first-hand updates to anyone around the globe who wants to know more about this quake.
Téléchargez l'application Volcans et Séismes et recevez l'une des alertes sismiques les plus rapides en ligne : Android | iOS
Je l'ai ressenti!
Je ne l'ai pas ressenti.