Scientists think Tongariro will stay calm is most likely scenario

Update Mon 13 Aug 11:58
In its latest report, GeoNet writes:
"Volcanic activity remains low. There has been no significant seismic activity at Tongariro for several days. Heavy rain on Sunday produced minor lahars which affected State Highway 46. No further reports have been received since Sunday. Of the three eruption scenarios deemed possible over the next seven days, the scenario considered most likely is that there will be no further eruptions, the next likely is that any eruptive activity will be of similar magnitude to that on August 6, and the least likely that larger eruptions will occur."
Update Sat 11 Aug 09:09
Overnight the activity from Tongariro Volcano remained weak and seismicity is low.

Update Fri 10 Aug 10:55
Overnight there was no further activity from Tongariro and seismicity has remained low.
A very minor amount of ash is reported from some of the new steam vents. GNS scientists measured around 2,100 tons per day of sulphur dioxide (SO2) and elevated quantities of carbon dioxide (CO2) and hydrogen sulphide (H2S), which confirms that magma is accumulating beneath the volcano.
It is possible, that the Aug 6 eruption was only a precursor to a pending magmatic eruption, which could even be large, if the size of initial phreatic activity is in proportion to the proper magmatic eruption.
Update Thu 09 Aug 07:39 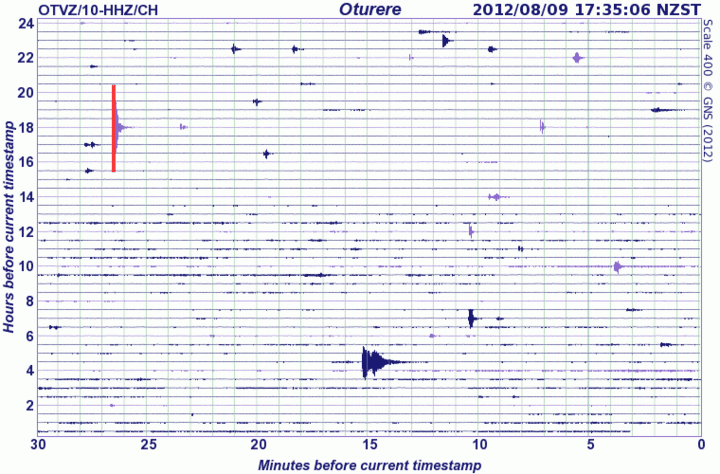 Seismic activity has been calm during the past 24 hours (GeoNet)
Tongariro has stayed calm.
In the meanwhile, first analysis of the ash from the erution were published: they showed it contains moderate levels of fluorine and that there was little or no new magma erupted on Monday night, confirming the initial hypothesis that the eruption was phreatic in nature.
Update Wed 08 Aug 07:09 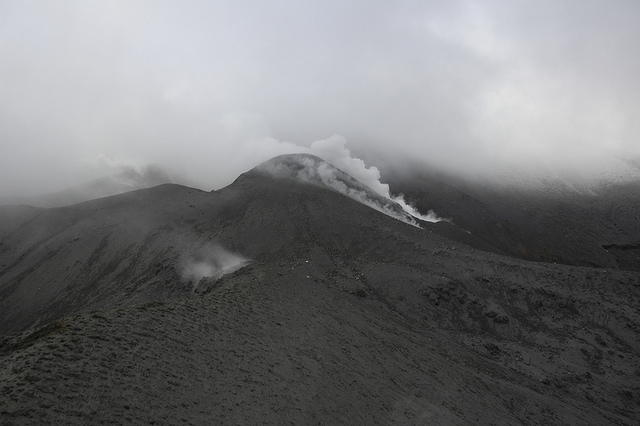 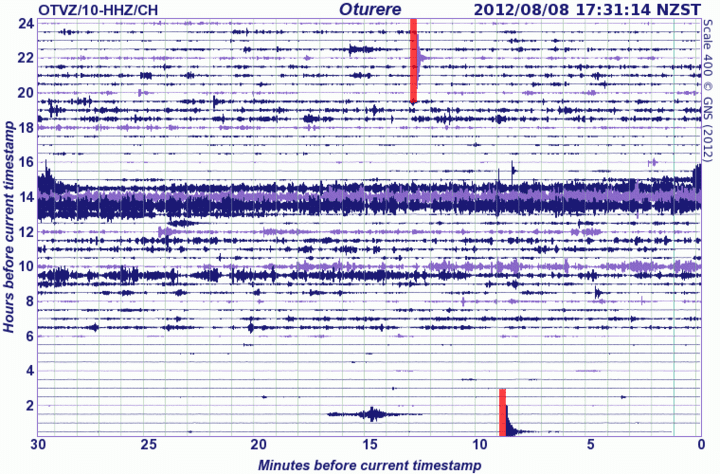 Current seismic signal at Tongariro (GeoNet)
This morning, NZ scientists could use a brief window of clear weather to make an overflight of the eruption area which was found to be just below the Upper Te Mari crater, where new steam vents were observed. No fresh lava bombs appear to have been observed, but numerous ballistic impacts of (older) blocks in up to 2 km distance around the vent. In addition, a debris flow deposit was observed. The lack of obvious fresh lava bombs supports the idea that the violent eruption was probably phreatic, i.e. caused by overheated ground water, and no fresh magma (so far) has reached the surface.
At the moment, Tongariro is calm, but eruptions could resume any time.

This is from the latest report from GeoNet:

"Current activity is weak with some steaming vents visible below the cloud level. Explosions at a new vent area below the Upper Te Māri crater have thrown blocks out more than 1.5 km. Current eruptive activity is low level but could re-commence at any time."

"No vents have opened in or around the Lower Te Māri crater, or at lower elevations on the mountain. There are no new vents or craters at the Ketetahi thermal area. Previously steaming ground at Ketetahi and Lower Te Māri crater appears more vigorous, but there were no obvious major changes there.

Blocks of old lava and hydrothermally altered lava up to approximately 1 metre size have been ejected by the eruption. There are extensive areas to the east and west of the new vents where falling blocks have formed impact craters in the ground. No burnt vegetation was seen. No steaming hot blocks were visible and all appeared to be angular shapes more typical of existing old rock, rather than fresh lava or scoria. Most blocks were covered by grey ash but many on the western slopes were not, which suggests that they were ejected after the main ash-producing phase of the eruption had finished. Blocks had reached 1.5 km to 2 km from the Te Māri craters area.

New rock falls were visible around the walls of the new vent area and Lower Te Māri craters and in some stream valley walls near the craters. This is a sign that significant ground shaking took place during Monday night's eruption."

Facts about the eruption summarized by GNS Science

Update Tue 07 Aug 13:02
GNS Science gave a highly informative and easy to understand press conference. The facts of the eruption so far summarized:

- The eruption started at 11:52 PM (NZ time) and lasted about 30 minutes
- There was no significant precursory activity (such as sudden tremor) indicating an immediate eruption (although seismic activity had been increased since a few weaks ago).
- The eruption WAS followed by 15-20 minutes of strong seismic activity instead.
- The eruption was explosive and produced a 7 km tall ash plume and threw ballistic blocks of up to 1 m diameter to 1.5-2 km distance.
- Ash drifted about 200 km towards Napir and caused some domestic flight cancellations.
- The vent was at an area below the Upper Te Mari crater.

At the moment, the nature of the eruption (whether phreatic or phreatomagmatic) is not clear. Ash samples have been collected and their analysis will probably solve this question soon. GNS Science has said they think the eruption was a hydrothermal (phreatic) explosion, which makes sense with the idea that the eruption was very short and discrete, Eric Klemetti writes on his excellent update. 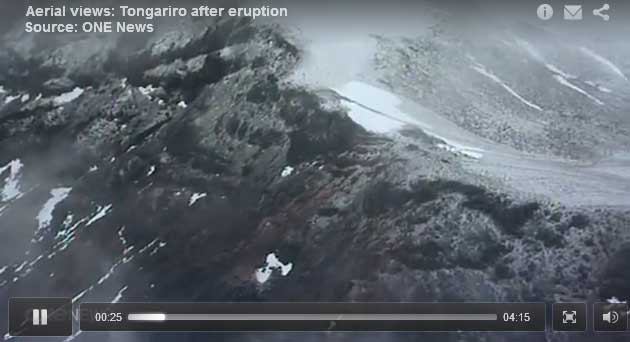 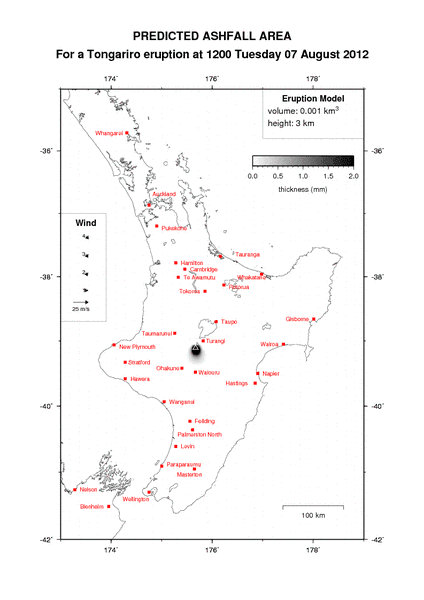 A new ash fall forecast map was published by GeoNet, in case of renewed activity from Tongariro. (GeoNet)
Update Tue 07 Aug 12:31
The ash plume from yesterday's eruption has dissipated VAAC Wellington reports.
An interesting video about the current situation was published by Weather-watch New Zealand:

Volcano calm at the moment, but activity could resume any time

Update Tue 07 Aug 09:20
At the moment, the volcano is quiet (as is the current seismic signal, see picture at bottom). Flights have resumed and Highway 1 has been reopened.
GNS Scienists are cited to say that the current activity may last for hours, days, weeks, months or even longer, and new eruptions could follow in the near future.
Some roads have been blocked as a precaution and people living near the volcano are told to keep their windows closed.
No evacuations have been ordered and some of the ski facilities on Ruhapehu are still operating.
Images of the effects of the ash fall from the eruption have been published by Stuff.co.nz.

New eruption at Tongariro on 6 August 2012

GNS Science and Geonet that an eruption occurred at Tongariro at approximately 11:50 pm (Monday, August 6). GNS Science volcanologists are monitoring the eruption and further information will be released as soon as it is available.

The eruption followed a few weeks of seismic unrest with an elevated number of shallow earthquakes and higher proportion of volcanic gases measured at the Te Mari Crate crater, which is probably the area of the new eruption. Many reports in the NZ news talk about a "new crater" in the side of the mountain.

Police were alerted to the eruption shortly before midnight by a member of the public who reported seeing "flame-like explosions" and a cloud of ash coming from "a new hole in the side of the mountain" (3news.co.nz).

There are no reports of damage but the brief eruption (possibly hydrothermal or phreatic in nature) has produced a significant ash plume rising to 20,000 ft (6 km) altitude the Wellington VAAC reported.
Volcanic ash was being seem as far as Napier in 100 km distance and up to 5 cm of ash fall was reported from nearby areas. The ash cloud stretching across most of the central North Island caused a number of domestic flights to be canceled.
A motorist witness described "a massive cloud was visible over the mountain, and was drifting toward the Napier region." Another witness from a truck driver said there was a "big flash", then it began "raining sand", and visibility was down to a matter of metres. "I could just see the yellow glare on the mountain," another witness describes the eruption "I only had visibility of about 10 to 15 feet in front of me. It was a bit scary." Other witnesses describe the large ash plume containing lots of ligthnings.
Truck driver Brynn Rodda was driving near the mountain when it erupted and told: “I could see this big cloud, it looked like a fist basically, at an angle a across the sky, and at about the wrist section of the fist, there was a sudden, orange ball of flash”.
Read more: www.3news.co.nz/Tongariro-breaks-115-year-silence/tabid/423/articleID/264379/Default.aspx 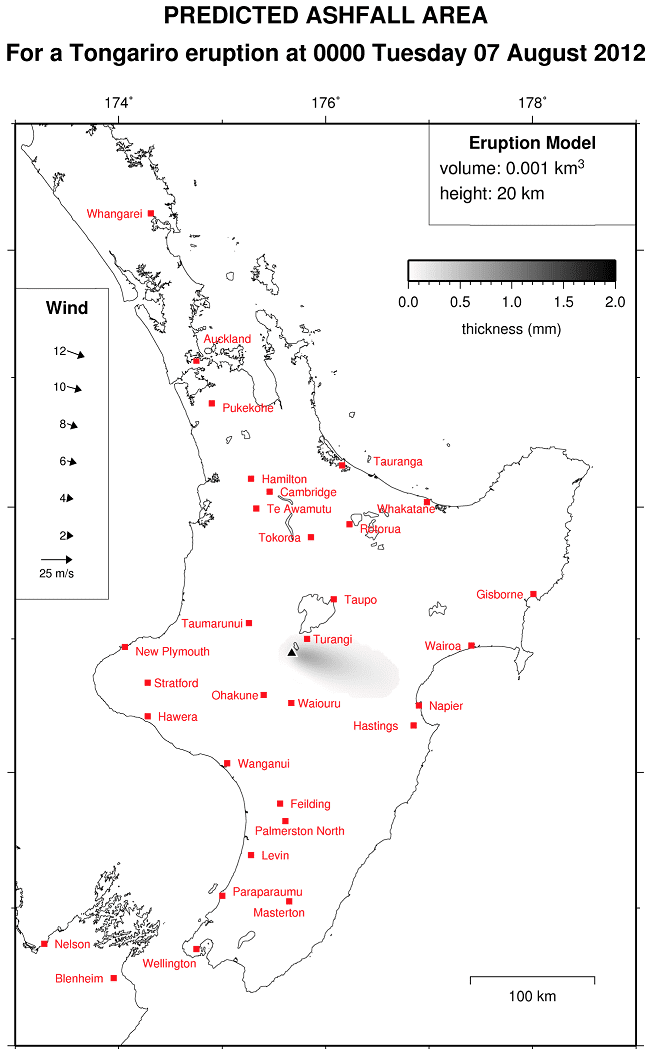 The location of Tongariro and the predicted ash fall area (GeoNet) 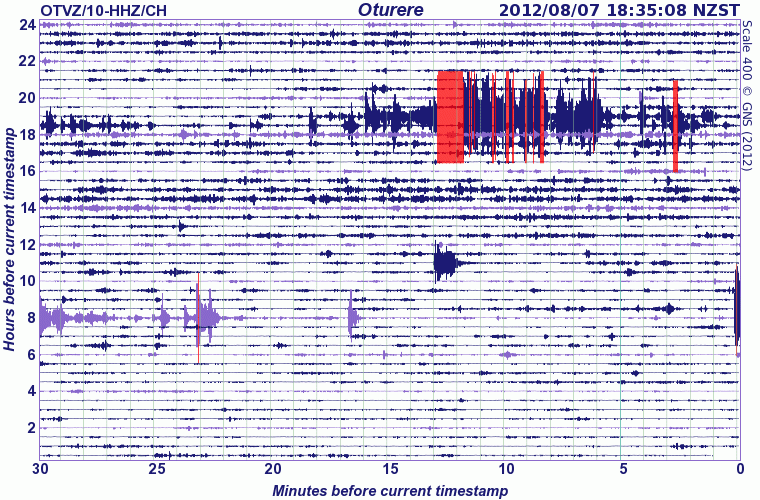 El Hierro (Canary Islands) activity
Updates and news about the volcanic unrest at El Hierro volcano, Canary Islands
What is a volcano?

Definition of a volcano
A volcano is the term for any place on the surface of the earth, where hot molten rock (magma) reaches the surface.
Iceland

Photos from Iceland
Volcanoes in the land of fire and ice. Iceland is one of the volcanically most active places on earth.
Volcano Videos

Photos of lava fountains
Why is there advertising on this site?