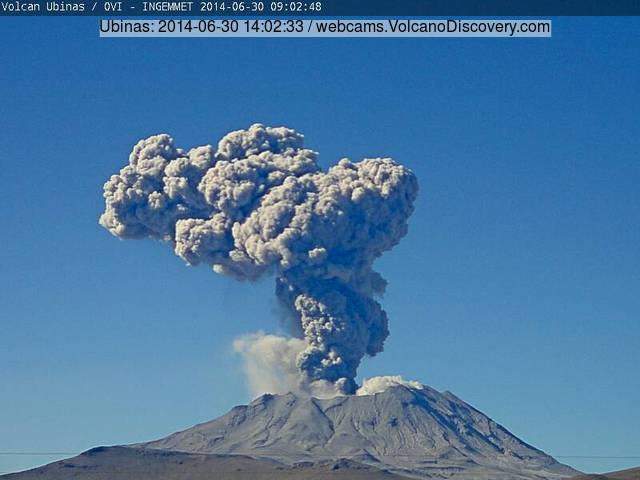 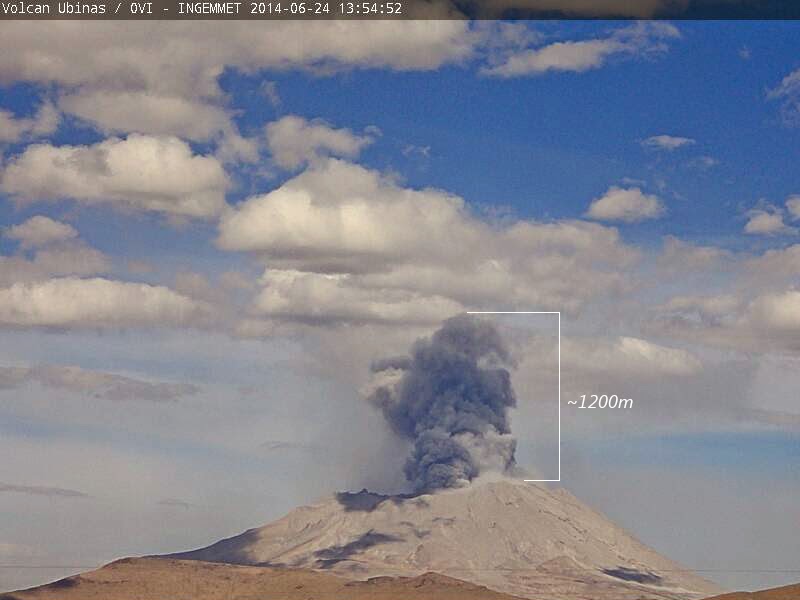 Explosion at Ubinas volcano yesterday
Activity has been decreasing overall during the past days. Ash emissions still occur, but less intense than previously. Only one explosion since 19 June occurred yesterday, producing a plume of approx. 1200 m height. Read all
Montrer plus
Ubinas volcano (Peru) - Smithsonian / USGS Weekly Volcanic Activity Report for 25 June-1 July 2014 (Continuing Activity)
mer., 25 juin 2014, 06:00
The Buenos Aires VAAC reported that during 25-28 June there was continuous steam and possible ash emission from Ubinas. In a press release from 30 June, IGP noted minimal releases of ash and gas emissions had been observed during the previous days. Gas-and-ash plumes observed on 30 June rose 1.8 km above the crater. Read all
Ubinas volcano (Peru) activity update
lun., 23 juin 2014, 09:59 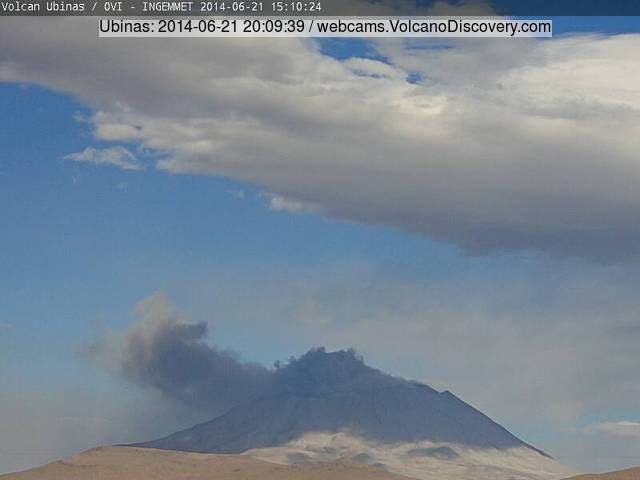 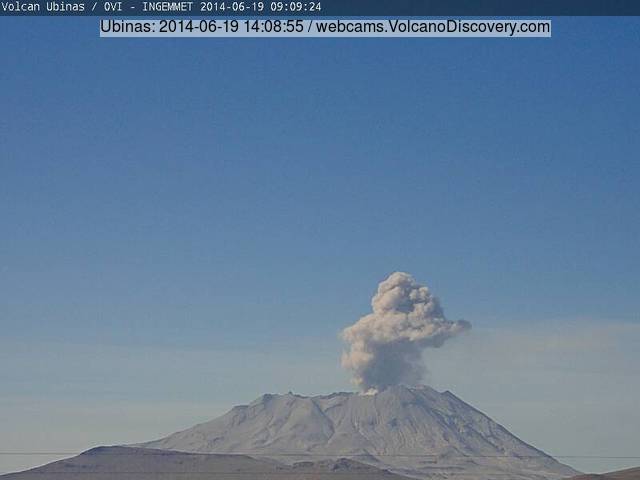 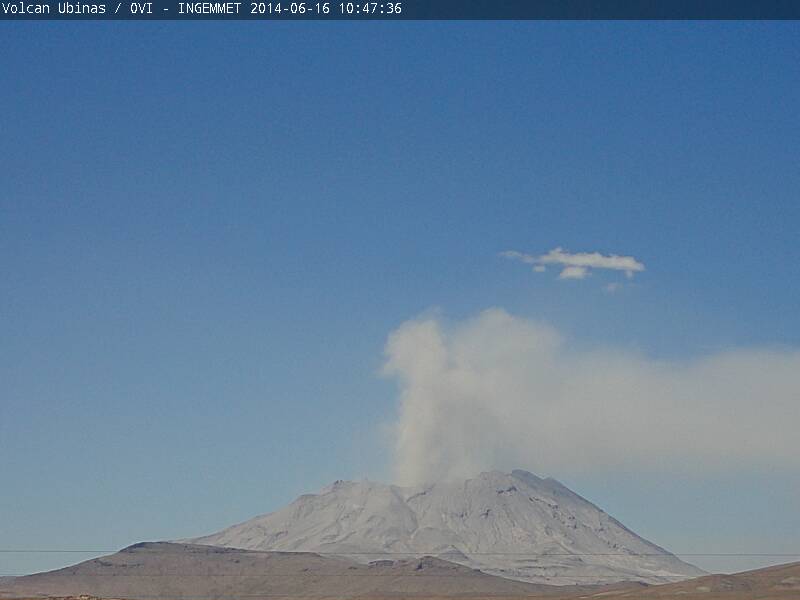 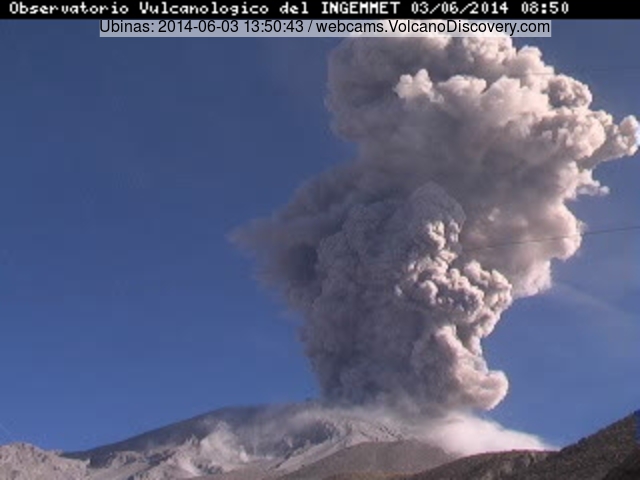 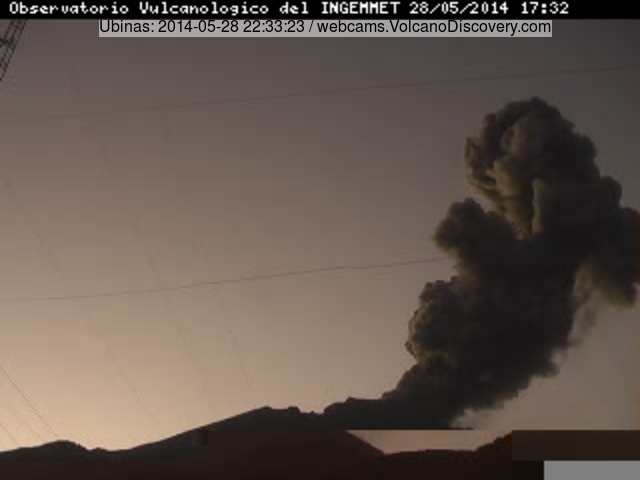 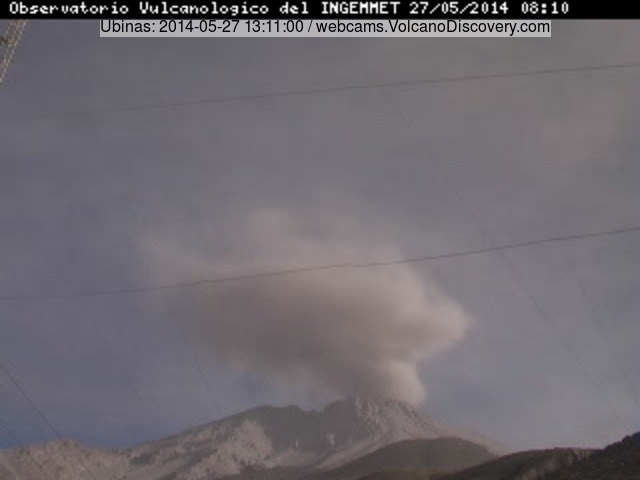 Steam and ash plume from Ubinas today
Steam and weak ash emissions continue at the volcano, but have decreased over the past days along with weaker seismic activity. 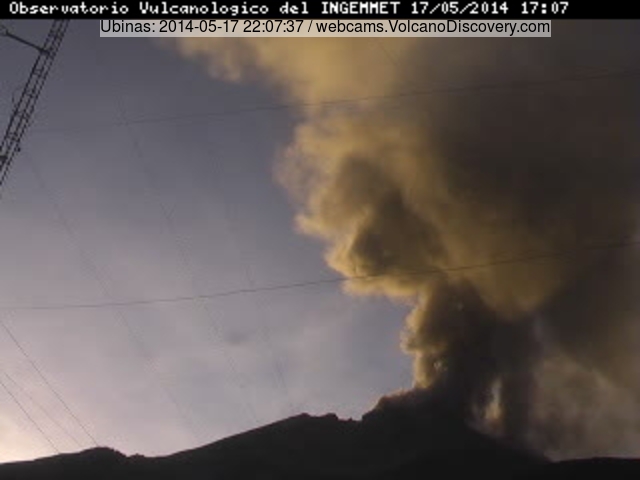 Ash emission from Ubinas last evening
Ash emissions have become near continuous and produce a plume extending approx 100 km to the NE of the volcano. Seismic activity is elevated.

Seismic activity at Ubinas during the past weeks (IGP)
Activity has again increased a bit during the past days. Along with more frequent hybrid earthquakes indicating rising magma, the number of small to moderate ash emissions has increased again. Read all
Ubinas volcano (Peru): activity continues to decrease
ven., 9 mai 2014, 08:43

Current seismic activity at Ubinas (UB1 station, IGP)
The current eruptive phase might be approaching an end. Since the second half of April, visual and seismic activity at the volcano have been decreasing. Explosions and ash emissions have almost ceased, although there are still some occasional bursts. Read all
Ubinas volcano (Peru) - Smithsonian / USGS Weekly Volcanic Activity Report for 7 May-13 May 2014 (Continuing Activity)
mer., 7 mai 2014, 06:00
IGP's Observatorio Volcanologico de Arequipa (IGP-OVA) and Observatorio Vulcanológico del INGEMMET (OVI) reported that during 7-12 May gas-and-ash plumes, sometimes with only minor amounts of ash, rose 0.6-3 km above the crater. Ash fell in various towns downwind of the plumes including Querapi (4 km S), Ubinas (6.5 km SSE), Escacha, Anascapa, San Miguel, and Tonohaya. Significant ashfall was reported in Santa Rosa de Phara on 8 May. Read all
Ubinas volcano (Peru) activity update
jeu., 1 mai 2014, 07:58 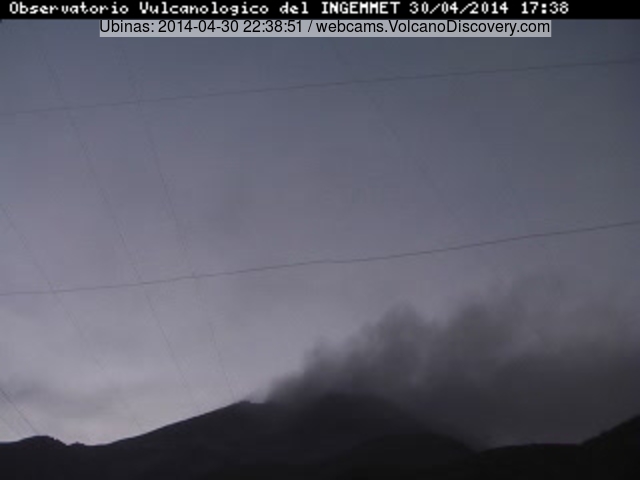 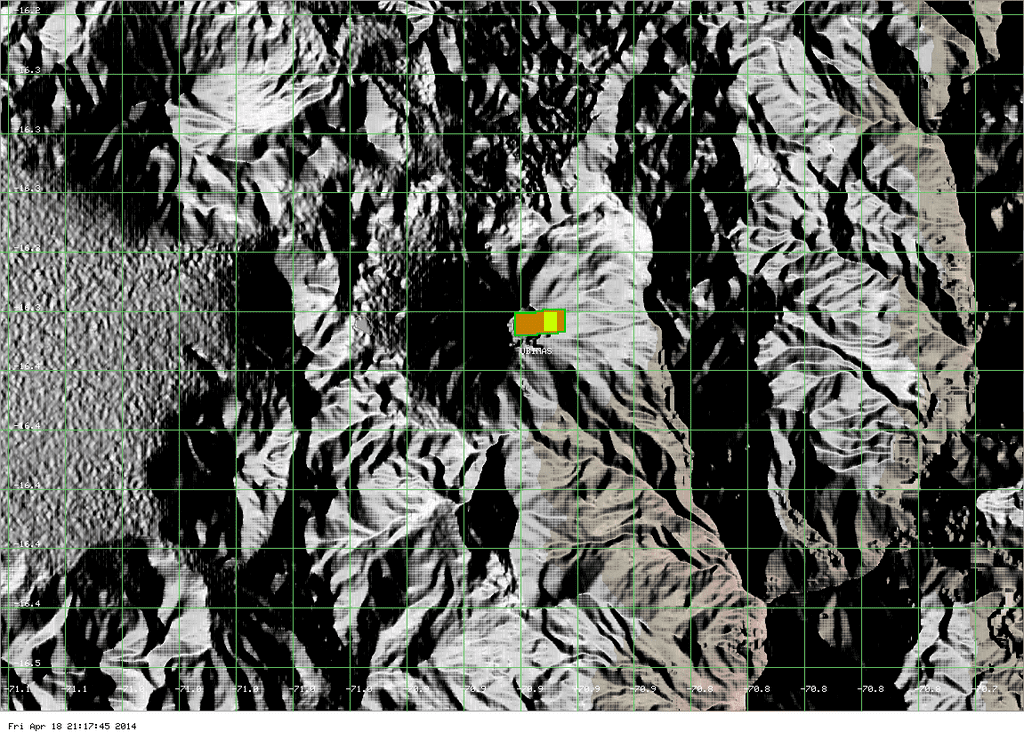 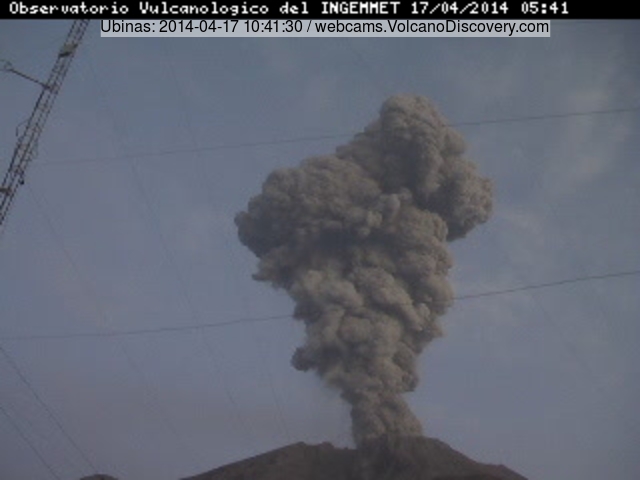 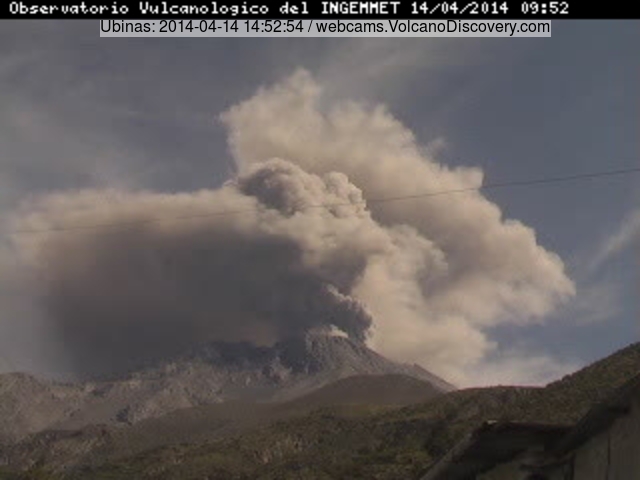 Ash emission from Ubinas this afternoon
The volcano's activity increases. As more magma arrives to build up the new lava dome in the summit crater, more gasses are being released as well and cause near-constant explosive activity with moderately strong ash emissions at the moment (see video). Read all
en haut
Ubinas volcano (Peru): increasing explosive activity with incandescent lava, preparations for evacuations
sam., 12 avril 2014, 08:23 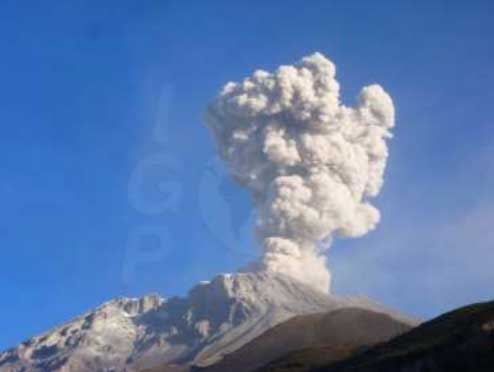 Volcano Trip
Guatemala is a country with spectacular volcanic activity, wonderful landscapes, colorful villages and towns, friendly people.
Join a trip organized by an experienced Guatemalan guide and photographer Diego Rizzo together with VolcanoDiscovery to have a chance to watch the active volcanoes (Fuego and Pacaya) from up close! Get an in-depth experience of the powerful and turbulent natural processes at work and take stunning pictures!
Volcanoes outside Earth

Volcanoes in the Solar System
The Earth is not the only place with volcanic activity. Active volcanism also occurs at at least 3 other bodies in our Solar System.
Dallol

Photos of Dallol
Look at one of the most surreal landscapes on Earth, created by hot springs, colorful salt deposits and volcanic gas vents.
Niveau d'activité sismique

Photos from Mt Bromo in eruption during 2010-11
The most recent eruption of famous Mt Bromo volcano in East Java, Indonesia.
Why is there advertising on this site?