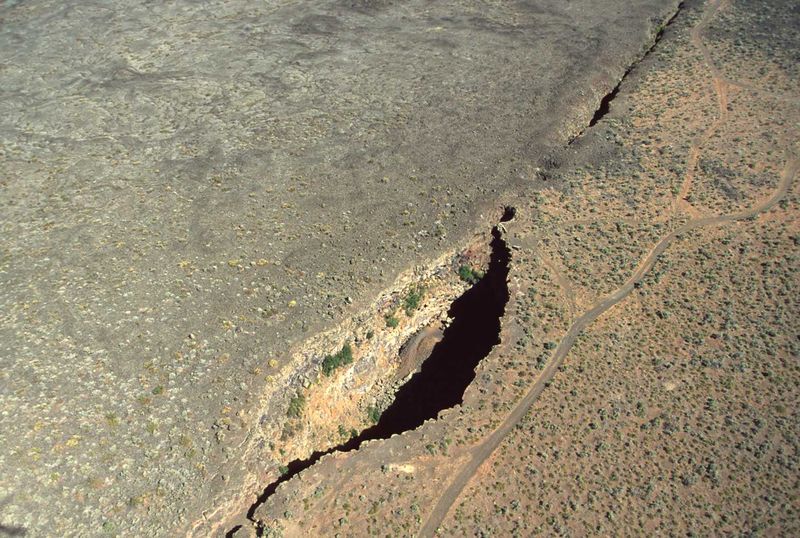 The small King's Bowl rift immediately to the north was also formed at about the same time along a central eruptive fissure flanked by two parallel non-eruptive fissures. This eruption produced a phreatic explosion that created Kings Bowl, an 80-m-long, 30-m-deep explosion crater.
The vent area of the Wapi field lies along the Great Rift of the Craters of the Moon and consists of 5 major and a half dozen minor vents covering an area of 0.5 km2. The largest of the vents contains several pit craters that truncate lava lakes that filled the crater.
Pillar Butte, a mass of layered lava flows and agglutinates, forms the high point of the lava shield. The Split Butte maar to the west is partially overlapped by flows of the Wapi lava field.
---
Source: GVP Wapi volcano information

Volcano Expeditions
Witnessing a volcanic eruption from close is an unforgettable experience. We offer a wide variety of tours and expeditions to active volcanoes worldwide.
Bárdarbunga

Hawai'i and Kilauea volcano photos
Lava flows, lava lakes, eruptions and aerial images from Kilauea on the Big Island of Hawai'i throughout the years.
Volcano Specials

Volcano Special Tours
We organize tours to particularly active volcanoes and during ongoing eruptions for extended observation time from various viewpoints. These trips, exclusively for very small groups, are often announced only at short notice and require fast travel and flexibility. Each trip is accompanied by a volcanologist from our team. Examples include: Kilauea (Hawai'i), Colima (Mexico), Krakatau and many others.
Gorely

Gorely volcano photos
Gorely is a young and very active shield volcano in southern Kamchatka. It is one of Kamchatka's easiest volcanoes to climb and offers stunning views into vast craters and the surrounding landscape.
Why is there advertising on this site?
Support us - Help us upgrade our services!
We truly love working to bring you the latest volcano and earthquake data from around the world. Maintaining our website and our free apps does require, however, considerable time and resources.
We need financing to increase hard- and software capacity as well as support our editor team. We're aiming to achieve uninterrupted service wherever an earthquake or volcano eruption unfolds, and your donations can make it happen! Every donation will be highly appreciated. If you find the information useful and would like to support our team in integrating further features, write great content, and in upgrading our soft- and hardware, please make a donation (PayPal or Online credit card payment).