Current seismic signal from FG3 station (INSIVUMEH)
Only 3 weak explosions occurred during 14-15 Oct with ash plumes rising 400 m, but the lava flow towards the Ash Canyon is now 600 m long according to the latest update of INSIVUMEH.
Fuego volcano (Guatemala) activity update
Sun, 14 Oct 2012, 10:05
There have been 5 weak explosions weak with ash clouds up to 400 height. The lava flow is now 400 to 500 m long and headed towards the Ash Canyon. From its flanks, incandescent blocks detach and reach the vegetation. Weak locomotive like sounds were heard.
Show more
Fuego volcano (Guatemala) activity update: weak lava flow from summit, occasional strombolian explosions
Fri, 12 Oct 2012, 10:05
Explosive activity has decreased in favor of effusion of a lava flow from the summit area, now reaching about 200 m length towards the Ash Canyon.
Fuego volcano (Guatemala) activity update
Tue, 9 Oct 2012, 10:05
The lava flow has advanced a bit and is now 150 m long, while the strength of explosions has been lower than during most previous days. Ash clouds rose 300-600 m and incandescent pulses were only up to 75 m high.
to top
Volcan Fuego (Guatemala): increase of activity and reactivation of lava flow
Mon, 8 Oct 2012, 10:05 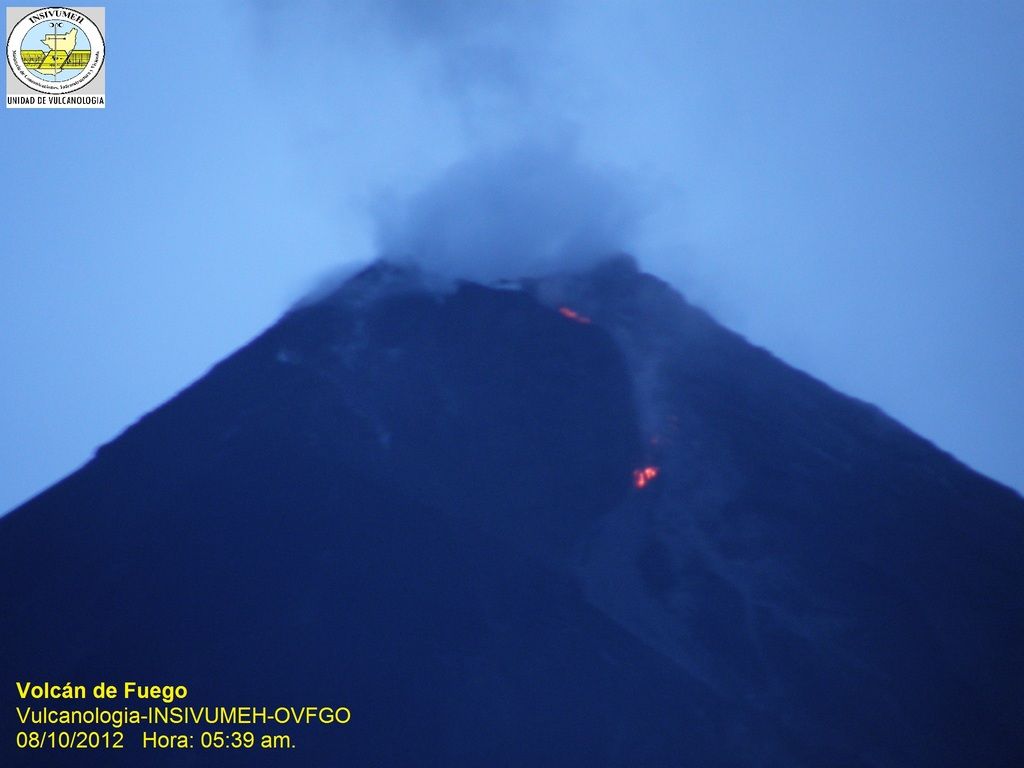 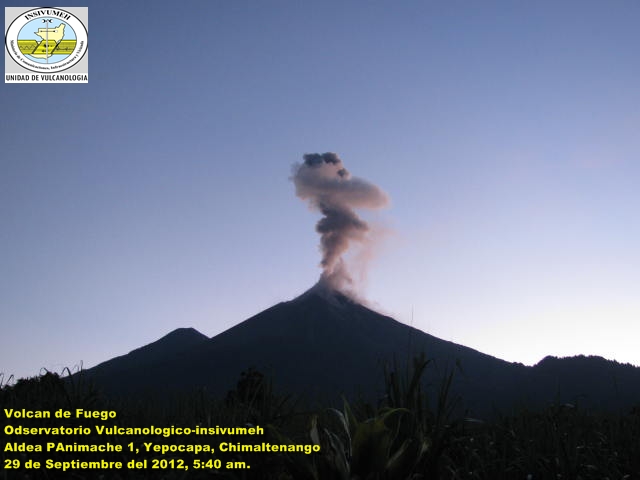 Explosion early yesterday (INSIVUMEH)
There have been 16 explosions between 28-29 Sep including 10 moderately strong ones with ash plumes rising 600-900 meters above the crater. Glowinb bombs were seen reaching 200 m height and generating avalanches around the crater. Fine ash fall was recorded at ​​the observatory, in Morelia and Santa Sophia and Sangre de Christo. Rumblings and shock waves from the explosions could be head and felt in up to 15 km distance.
to top
Show more
Fuego volcano: large lahar through Ash Canyon towards towards Osnuna
Sat, 29 Sep 2012, 08:08
A large lahar traveled through the Ash Canyon (Barranco Ceniza) towards the community of Osnuna on 27 Sep between 14.30-15:50. More than 55 m of rainfall during a single hour (2.2 inches) remobilized still hot pyroclastic flow deposits from the 13 Sep eruption in the canyon including large tree fragments and boulders more than 1.5 meters in diameter. The lahar, strongly smelling of sulfur, cut the dirt road between San Andrés Osuna and Siquinalá. It was the first of these dimensions, but INSIVUMEH warns that more are possible.
Fuego volcano (Guatemala): further increasing activity
Sat, 29 Sep 2012, 07:14

Current seismic signal from station FG3 (INSIVUMEH)
The number and strength of explosions has been further increasing. In its latest report, INSIVUMEH counted 18 eruptions during 27-28 Sep, out of which 10 were moderately sized and produced ash plume up to 1 km height, and fountains of incandescent material of up to 200 m height, which generated avalanches on the upper crater flanks. Read all
Fuego volcano (Guatemala) activity update
Fri, 28 Sep 2012, 08:30
Activity remains stable. Strombolian bursts reaching average heights of 75 - 150 meters above the crater, 14 explosions total observed between 26-27 Sep (9 weak and 5 moderate) with ash plumes of 500-800 m height above the crater.
Fuego volcano (Guatemala): increasing activity
Thu, 27 Sep 2012, 08:47
The volcano continues to increase its activity slowly. Incandescent strombolian pulses were seen at night throwing bombs to 100-150 meters above the crater and some of the material generated weak to modest avalanches when falling back. Rumbling and degassing sounds were noted at intervals of 1-6 minutes. Read all
to top
Fuego volcano (Guatemala) activity update: mild to moderate strombolian explosions
Wed, 26 Sep 2012, 09:45 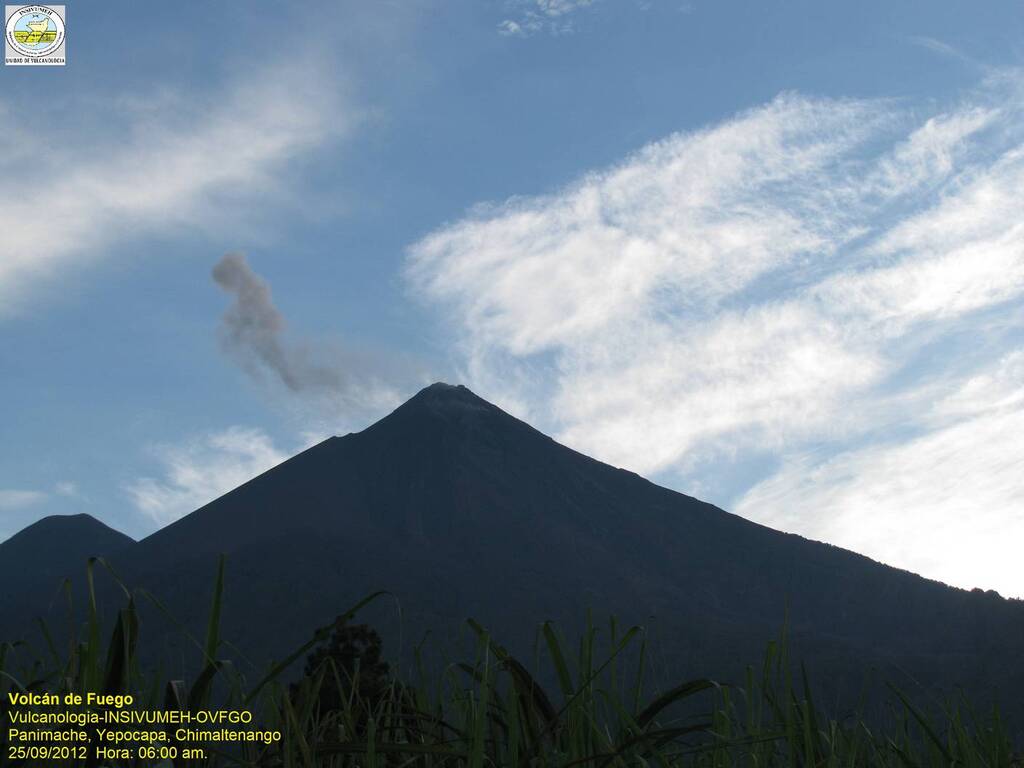 Fuego volcano with a small blast ash cloud seen from the observatory
In the last 24 hours between 24-25 Sep, Fuego's activity increased a bit. The volcano had 13 explosions, some of which could be heard in 6 km distance. Incandescent material was thrown up to 100-150 m above the crater and ash plumes reached 300-800 m height and drifted up to 10 km to the north and northeast, INSIVUMEH reported in the last bulletin yesterday.

Current seismic signal from station FG3 (INSIVUMEH)
Activity remains moderate to low with 8 explosions registered over the past 24 hours, 6 weak and 2 moderate ones sending small ash plumes up to 700 m above the crater. Incandescent bombs reach 75 m above the crater and produce small avalanches towards Taniluya and Ash canyons.
Fuego volcano (Guatemala) update: decreasing activity
Sun, 23 Sep 2012, 10:05
Activity has decreased at Fuego volcano. In its latest report from this morning, INSIVUMEH writes that there were only 5 weak and one moderate explosions over 24 hours, with small ash plumes up to 300-600 m height and ejections of incandescent bombs to 75 m above the crater. Small avalanches of blocks were triggered towards the Taniluya and Ash canyons and there was faint rumbling audible.
Fuego volcano (Guatemala) activity update: weak to moderate explosions, ejection of incandescent material
Sat, 22 Sep 2012, 07:35 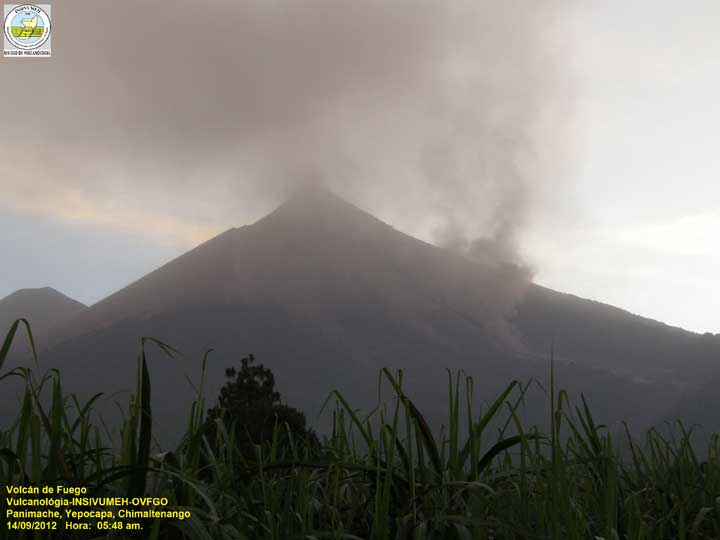 View of Fuego from the south yesterday morning. Lots of fine ash from the last eruptions is still hanging in the air (INSIVUMEH webcam)
The Fuego volcano eruption has decreased to normal activity, INSIVUMEH reports last night. The seismic station FG3 shows signals typical for weak explosions that send fine ash clouds up to 500 meters above the crater. Read all
to top
Volcán Fuego (Guatemala) update: decreasing activity
Fri, 14 Sep 2012, 23:38
The eruption has started to decline from 10 am in the morning today 14 Sep, INSIVUMEH reports. Read all
Fuego volcano (Guatemala): change in eruptive style: large lava flows
Fri, 14 Sep 2012, 07:02
The eruption of the volcano has undergone a change from explosive to mainly effusive over the past few hours, INSIVUMEH reports in the latest bulletin last night (22h00 local time). Instead of a large sustained ash column, there are now smaller pulsating ash emissions reaching 3-700 m height, but instead the volcano is producing large (for Fuego) lava flows between 900 and 1,000 meters long and 150 wide. The different activity is also leaving a different type of seismic signature and has remained stable over the past hours. Read all
Fuego volcano (Guatemala): increase of eruption, pyroclastic flows, ash plumes rising 3 km
Thu, 13 Sep 2012, 22:39 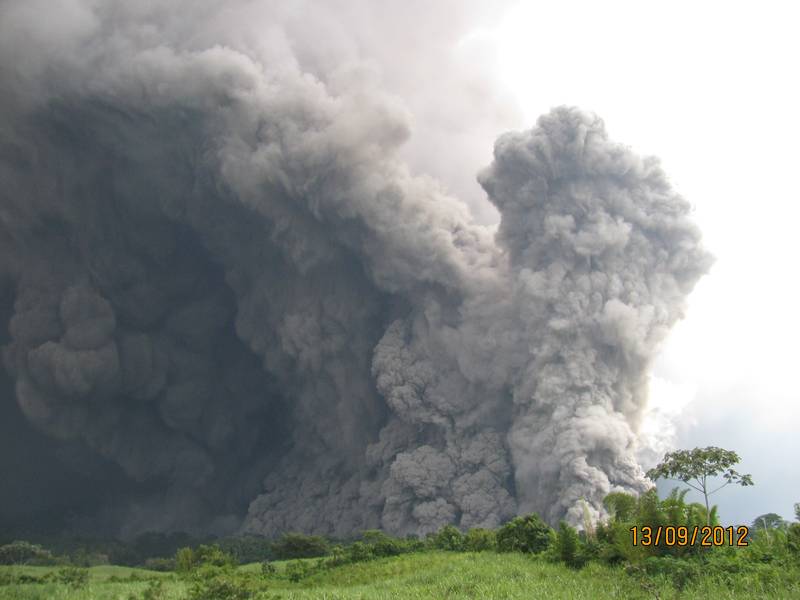 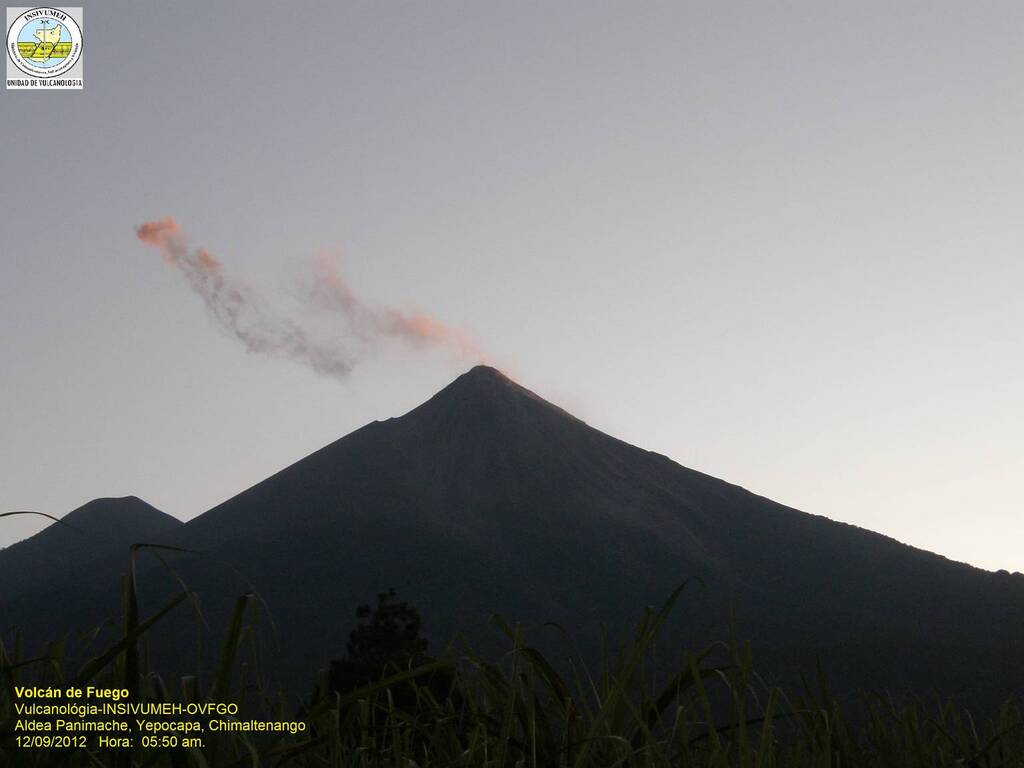 Fuego on the morning of 12 Sep 2012
There has been an increase in volcanic activity. During 24 hours observation 11-12 Sep, there were 13 explosions, 11 weak and 2 moderate ones producing ash clouds reaching 400-600 m height and drifting 6 km to the W and NW. At night, strombolian activity with incandescent material was seen ejected to 75-100 m height. Weak avalanches traveled towards Taniluya and Ash canyons. Read all
to top
Show more
Fuego volcano (Guatemala) activity update: weak explosions and lava flow again active
Tue, 11 Sep 2012, 10:05

Current seismic signal from FG3 station (INSIVUMEH)
4 weak explosions with ash plumes rising 300 m and some glowing material ejected to about 100 m were observed during the past observation period 8-9 Sep. Small avalanches of rocks towards the Tniluya and Ceniza Canyons were produced by material falling back from the explosions. Weak degassing sounds are heard. Read all
Fuego volcano (Guatemala) activity update: steaming, few to none weak explosions
Sat, 8 Sep 2012, 09:26

Current seismic signal from FG3 station (INSIVUMEH)
After the end of its recent paroxysm on 4 August, the volcano has quieted down a lot. INSIVUMEH reports only white steaming and that the lava flows are cooling and not producing avalanches. Read all
Fuego volcano (Guatemala) activity summary (29 Aug - 4 Sep)
Thu, 6 Sep 2012, 06:30
during 29-30 August lava flows from Fuego traveled 250 m down the Taniluyá drainage (SW), generating block avalanches that produced gray plumes and reached vegetated areas. Read all
to top
Fuego volcano (Guatemala): paroxysm has ended after 32 hours
Wed, 5 Sep 2012, 11:46 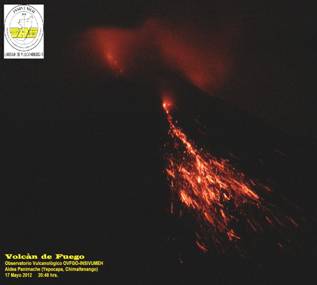 Lava flow from Fuego
The latest stronger eruptive episode (paroxysm) of Fuego has ended after 32 hours INSIVUMEN reports in the last special bulletin this morning: After 16:30 local time yesterday, only little ash was left in the atmosphere and the lava flows, which had reached 1.3 km length are decreasing. Read all
Fuego volcano, Guatemala: increased activity, constant explosions, lava flows
Mon, 3 Sep 2012, 10:05

Current seismic signal from Fuego (INSIVUMEH)
Fuego volcano's activity has increased. Seismic recordings monitor rising tremor and there are (for now weak) constant explosions ejecting ash to 900 meters above the crater forming plumes of 8 kilometers in two directions ,one south and one to the southwest. This activity generates constant moderate degassing sounds, audible to 10 kilometers distance. Reports of OVFGO Volcano Observatory indicate incandescent material being ejected to 100 m height. Read all
First visit to our site? If you havn't done it yet, download the Volcanoes & Earthquakes app to get one of the fastest volcano news online:
Android | IOS 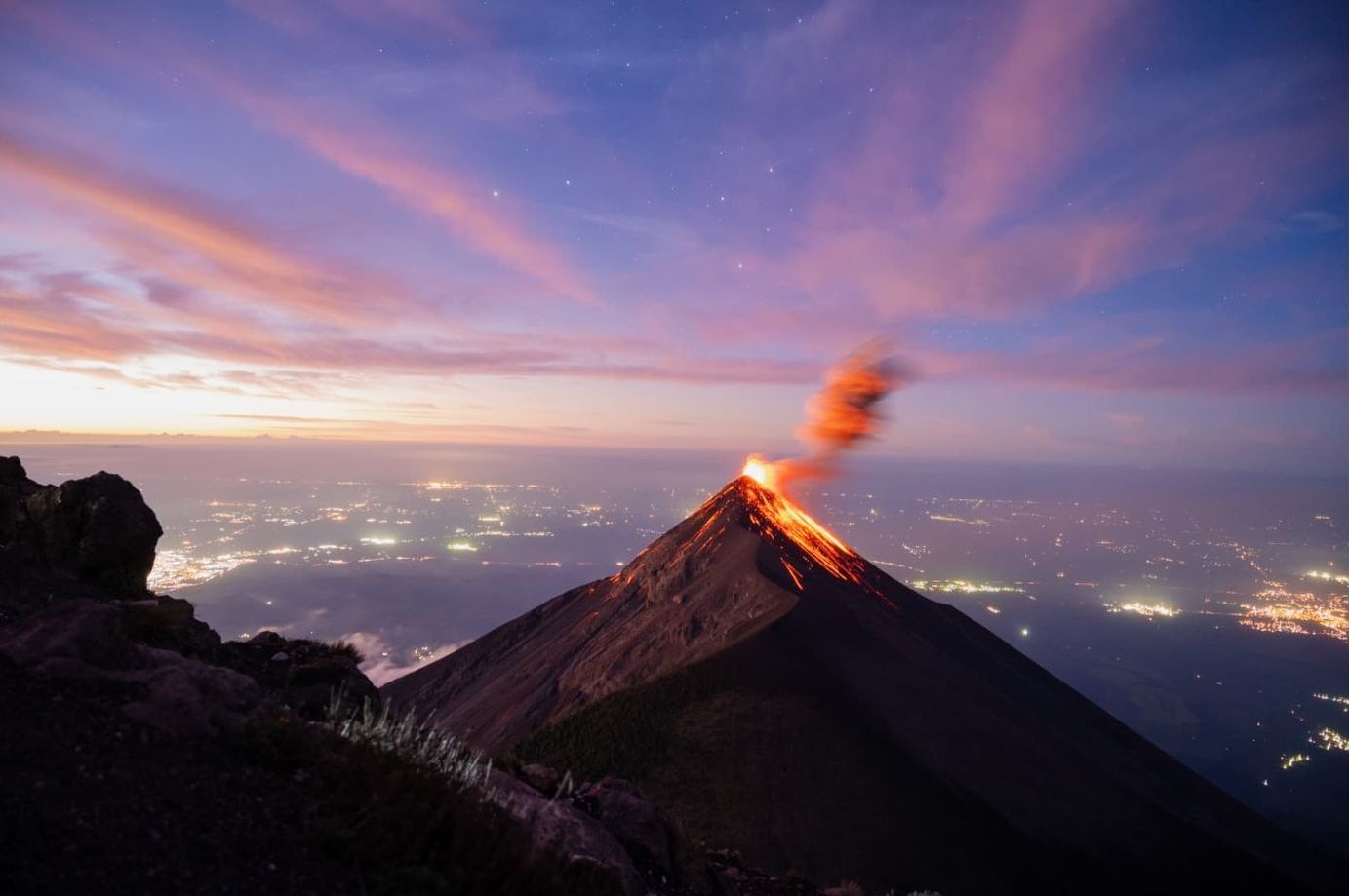 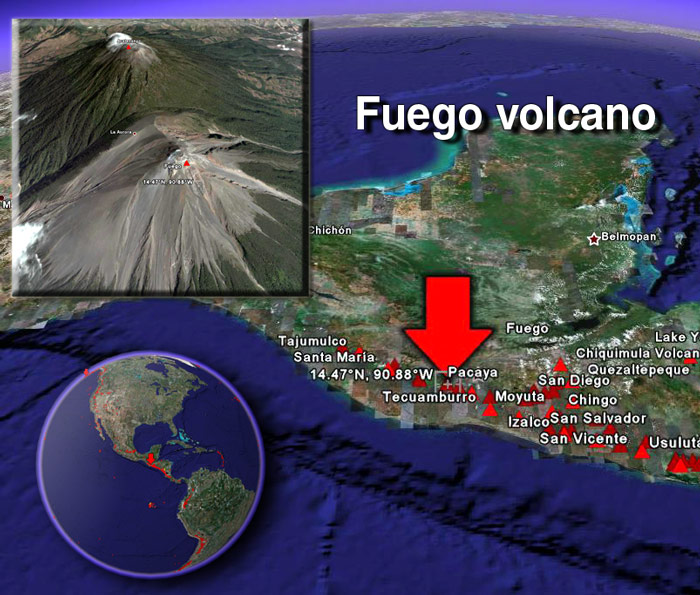 Bromo volcano photos
Bromo is one of Indonesia's most visited volcanoes. It is the most active vent inside the huge Tengger caldera and erupts every few years.
Indonesia

See quakes that people felt in the last week
Kilauea

Kilauea volcano photos
The most active volcano in the world with a record long lasting eruption since 1983: images of lava flows, lava lakes, explosions, lava meeting the ocean, aerials and more.
Armenia
18-28 Sep 2021

Land of Volcanoes & History
Armenia, a small country in the South Caucasus, has a long dramatic history and a rich cultural heritage. Despite its compact territory, it has much to offer its guests: fascinating mountain landscapes with snowy volcano peaks, beautiful gorges and cliffs, alpine meadows and subtropical forests, monasteries hidden in valleys, archaeological sites and picturesque villages.
Get the ad-free version!
Why is there advertising on this site?
Support us - Help us upgrade our services!
We truly love working to bring you the latest volcano and earthquake data from around the world. Maintaining our website and our free apps does require, however, considerable time and resources.
We need financing to increase hard- and software capacity as well as support our editor team. We're aiming to achieve uninterrupted service wherever an earthquake or volcano eruption unfolds, and your donations can make it happen! Every donation will be highly appreciated. If you find the information useful and would like to support our team in integrating further features, write great content, and in upgrading our soft- and hardware, please make a donation (PayPal or Online credit card payment).