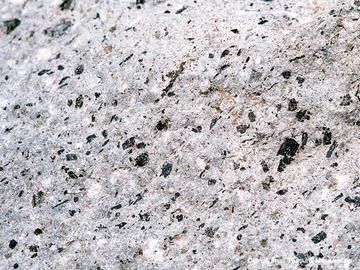 Typical andesite from the Methana peninsula (Greece)
Andesite is a gray to black volcanic rock with intermediate silica content, typical for lava domes and stratovolcanoes in subduction zones.
Andesite is an igneous volcanic rock containing between about 52 and 63 weight % silica (SiO2). Andesite is the extrusive equivalent to plutonic diorite - if a dioritic magma cools beneath the surface as an intrusion, it will be diorite, if the same magma erupts during a volcanic eruption, the rock formed is andesite.

Where does andesite usually occur?

Andesite and diorite are among the most common magmas produced crust above subduction zones at continental plate margins, such as the Andean belt in South America, where its name originates, or the Cascade range in North America. Other areas rich in andesite include the subduction zones of Central America and Mexico, as well as the opposite sides of the ring of fire from New Zealand to Indonesia, the Philippines, Japan, the Kuriles, Kamchatka and the Aleutian arc.

At the subducting plate, magmas are generated by partial melts of the mantle, which then rise into the crust above, where they are stored in magma chambers, where they can cool down and partially crystallize. When the magmas eventually continue to rise and approach the surface either during an eruption or as an intrusion, the residual magmas have changed in composition to be enriched in silica and often have andesitic composition. This process is called factional crystallization.

Which crystals does andesite have?

Andesites commonly have abundant plagioclase feldspar along with pyroxenes (clinopyroxene and orthopyroxene), often mica (mostly biotite), and sometimes small amounts of hornblende. Silica-rich andesites may contain small amounts of quartz, while very silica-poor andesites, close to basaltic compositions, still may have some olivine in them.


Andesite lava is still hot (between 900-1100 deg C) and fluid enough to be able to form lava flows, but already sticky (viscous) enough to prevent lava flowing fast and being "runny". Instead, andesitic flows are rather thick and tall, with a high aspect ratio between thickness and length. They often form broad, thick tongues, that resemble giant toes. In rare cases, their length exceed a few km.
Due to their stickyness, gasses can not easily escape from the magma, and when erupted, a gas-rich andesitic magma can drive very explosive eruptions, as the gasses suddenly fragment the magma.
Andesitic lava can also form so-called domes rather than lava flows - accumulations of thick lava masses above or near the vent that have been unable to flow away. Collapses of such lava domes often generates dangerous hot ash flows, as the disintegrating rocks release heat and additional gasses to form a deadly turbulent mixture (pyroclastic flows, or nuée ardente).


Andesite is a characteristic rock on the volcano peninsula Methana, on Santorini and on Nisyros island. Most lava domes on Methana are composed of andesitic rocks. Interesting is the phenomenon of magma-mixing that is thought to be a driving force in many explosive eruptions where the relatively cool andesitic lava is involved: basaltic intrusions in such a magma-chamber heat up the magma and chemical reactions activate such a magma. The result may be a lava dome like Merapi (Indonesia) or Montserrat.

Volcano Tours on Hawai'i
The Hawaiian Islands are not only home to the most active volcanoes in the world, Kilauea and Mauna Loa on the Big Island, but also boast a unique natural environment. Born by volcanic activity of a very active hot spot in the middle of the Pacific Plate, they are a showcase of natural history.
Nyiragongo

Nyiragongo volcano photos
Nyiragongo (DR Congo) has the world's largest and most active lava lake. Enjoy our pictures taken during several expeditions over the past years.
Lava and water

Photos from lava lakes in the world: Erta Ale, Nyiragongo, Hawaii, Vanuatu
Get the ad-free version!
Why is there advertising on this site?
Sources: VolcanoDiscovery / VolcanoAdventures and other sources as noted.
Use of material: Most text and images on our websites are owned by us. Re-use is generally not permitted without authorization. Contact us for licensing rights.
Volcanoes & Earthquakes