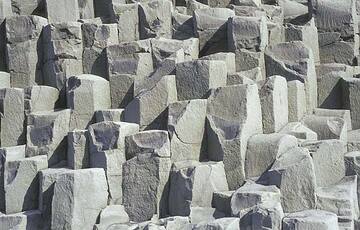 Basaltic columnar-jointed lava (Iceland)
The most common type of volcanic rock, with a relatively low silica content and typically erupted at shield volcanoes.
Basalt is the usually hard and black volcanic rock formed from (liquid) balsalitc lava. Balsaltic lava contains less than about 52 percent silica (SiO2) by weight. Because of its low silica content, it has a low viscosity (resistance to flow). Therefore, basaltic lava can quickly and easily flow more than 20 km from a vent. The low viscosity typically allows volcanic gases to escape without genera... Read all 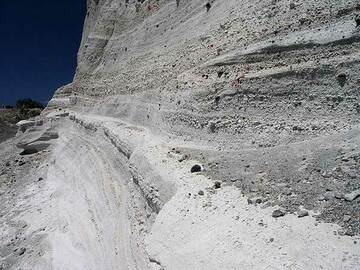 Base surge deposits from the great Minoan eruption on Santorini (ca. 1613 BC)
Base surges are ground hugging, fast outward moving and turbulent, dilute clouds of gas and ash. They result from water magma interactions (violent steam explosions). During the 1965 eruption of Taal volcano (Philippines), such base surges were first observed. Some of them traveled 4 km and killed 189 people. Base surges were first identified during ocean nuclear weapons explosions in the Pacific.... Read all

An adjective describing the chemical composition of magmas (or lavas) having relatively low content of silica (SiO2), as opposed to "acidic", and a comparably high content of iron and magnesium.
In petrology and volcanology, magmatic rocks (or the magmas they derived from) are often classified by their bulk silica (SiO2) content, which can typically range from around 40-75 weight %, and results in the 4 main types of magma by composition. These are, in order of increasing silica content: basaltic (45-53%), andesitic (53-62%), dacitic (62-69%), and rhyolitic (69-77%).
Rocks with low sili... Read all 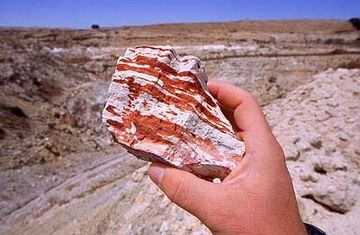 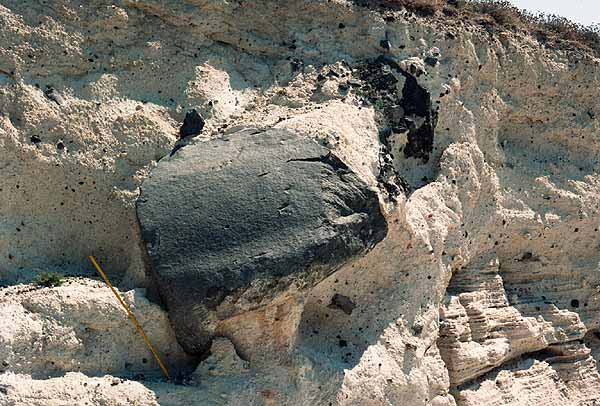 Large ballistically ejected block on Santorini (Greece)
Volcanic blocks are solidified rock fragments greater than 64 mm in diameter. Blocks commonly are ejected during explosive eruptions and consist of older pieces of the volcano's edifice, e.g. parts of the conduit, lava domes or older lava flows.
During violent eruptions, blocks of up to several meter size can be thrown to several km distance. For example, during the Minoan eruption (ca. 1613 BC) of the Santorini volcano in Greece, meter-sized blocks were thrown to up to 7 km horizontal distance and impacted violently into the ground, some of them destroying houses of ancient settlements. The time some of these blocks spent on their trajec... Read all 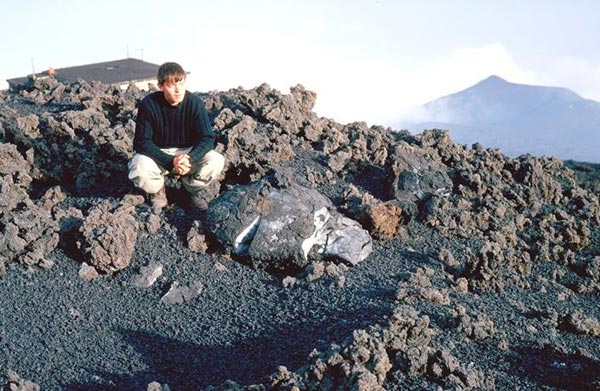 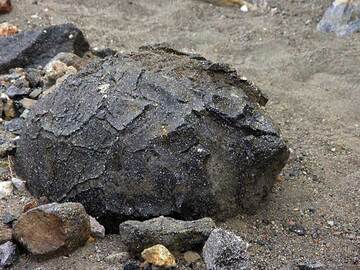 Breadcrust bomb, ca. 50 cm long, from Lokon volcano (N-Sulawesi, Indonesia)
Volcanic bomb with a cracked surface, similar to bread, caused by the slow expansion of the interior gas bubbles while cooling.
A breadcrust bomb is a volcanic bomb with a cracked and checkered surface, sometimes resembling the surface of a loaf of bread. The cracks develop when the outer surface of a partially molten lava fragment cools to form a brittle surface and then subsequently cracks as the hot interior expands due to the continued growth of gas bubbles. Read all

Kilauea volcano photos
The most active volcano in the world with a record long lasting eruption since 1983: images of lava flows, lava lakes, explosions, lava meeting the ocean, aerials and more.
VAAC

Volcano & Earthquake news feeds
If you like to use RSS to access the latest news about volcanoes and earthquakes without needing to visit the site, have a look at our available news feeds!
Get the ad-free version!
Why is there advertising on this site?
Sources: VolcanoDiscovery / VolcanoAdventures and other sources as noted.
Use of material: Most text and images on our websites are owned by us. Re-use is generally not permitted without authorization. Contact us for licensing rights.
Volcanoes & Earthquakes