Illustration of the main types of tectonic faults (source: USGS)
A fault is a fracture in the rigid crust of the earth, along which the two blocks on either side have moved relative to each other and often may do so again in the future. When blocks move along a fault, tectonic earthquakes are generated.
Depending on the movement, there are strike-slip faults (side-wards movement), normal faults (caused by extension), and reverse or thrust faults (caused by compression). A reverse fault with a small dip angle is called a thrust fault. Read all 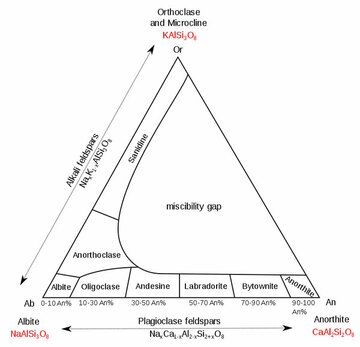 Compositional phase diagram of the different minerals that constitute the feldspar solid solution. Image credit: Muskid / CC BY-SA (https://creativecommons.org/licenses/by-sa/4.0)
Feldspars are a group of closely related rock-forming silicate minerals that are by far the most common in the earth's crust, making up about 41% of its weight.
Feldspar is the most common mineral formed during crystallization of magmas and almost always present in magmatic rocks.
Chemically, the feldspar minerals primarily bind varying proportions of the most common light elements potassium (K), sodium (Na), calcium (Ca), and aluminum (Al) ions, into a crystal lattice of silica (Si) ions.
Feldspars are divided into several groups, based on their chemical compositions of potassium (K), sodium (Na) and calcium (Ca). Thus, there are 3 end-members and numerous intermediate compositions:
- potassium: (K-spar) endmember KAlSi3O8
- albite: NaAlSi3O8
- anorthite: CaAl2Si2O8

Intermediates between K-feldspar and albite (... Read all

Epicenter and hypocenter of an earthquake (Source: USGS earthquake glossary)

Top 20 quakes in 2016
Several magnitude 7 quakes occurred in 2016 (but none above M8): Papua New Guinea, NZ, Ecuador, Solomon Islands, Sumatra, Chile, Alaska and others - nearly all major earthquakes were located near active subduction zones.
See the top 20 list of largest quakes in 2016 with this map.
Strongest quakes

Volcanic crisis at Sakurajima - updates
A strong earthquake swarm and increased inflation were detected in August 2015 and triggered authorities to raise the alert level, as volcanologists think that a larger eruption could follow. News and updates on the events can be found on this page.
Etna Trekking Tours

Private tours on Etna volcano
Discover Europe's largest active volcano on private, guided 1-day tours. Tours can be customized for different interests and fitness levels.
Get the ad-free version!
Why is there advertising on this site?
Sources: VolcanoDiscovery / VolcanoAdventures and other sources as noted.
Use of material: Most text and images on our websites are owned by us. Re-use is generally not permitted without authorization. Contact us for licensing rights.
Volcanoes & Earthquakes