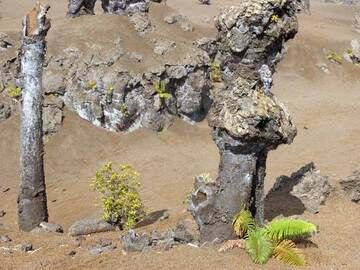 Lava trees on the eastern Rift zone Kilauea volcano, Hawaii
The lava coating around a tree trunk left by an invading liquid lava flow.
When a liquid lava flow invades a forest, often, the lava does not overthrow the larger trees, but flows around their trunks. At the very contact of the hot lava to the bark, a thin layer of the lava is quenched sufficiently to form an isolating coating around the trunk. The tree itself most often burns down slowly, eventually falling down onto the lava.
The typical lava trees are formed when af... Read all 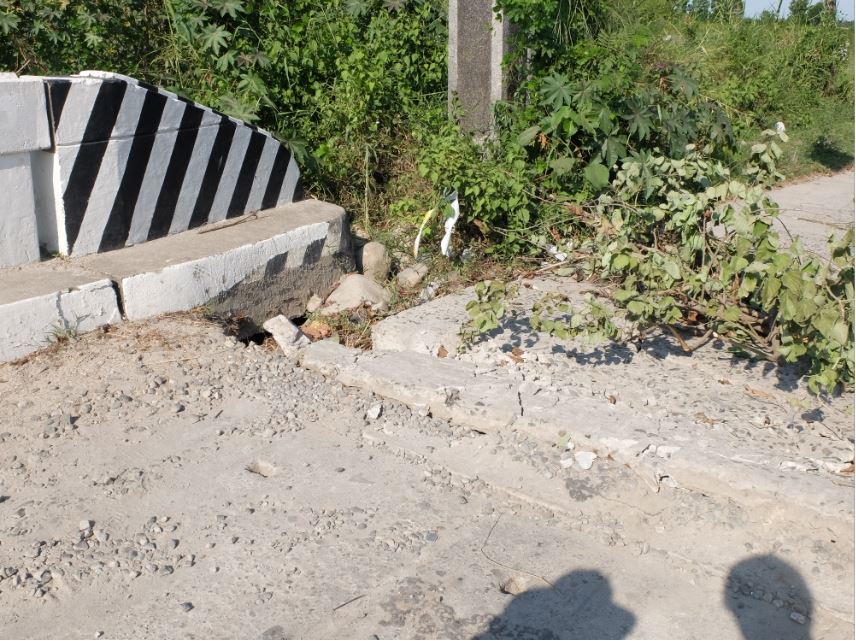 An aftermath of the 2019 Luzon Earthquake in the Philippines. Liquefaction affected the base filling material under the approach to the bridge. This caused that part of the road to slightly subside due to a weakened base. (source: Photograph by Renz Lazatin, 2019)
Very intense earthquakes may sometimes cause the solid ground to act as though it was muddy liquid. This earthquake-induced phenomenon is called Liquefaction. This occurs in areas where the ground is composed of particles with plenty of spaces where water could sneak into (be water-saturated) as in sandy soils and uncompacted soils.
Liquefaction occurs when the very intense shaking of the earthquake causes the pore water pressure in the soil to increase, leading to loss of strength and stability of the soil. This results to the ground acting as though it was liquified.
After the shaking ends, the soil immediately turns solid and holds anything caught sinking in it, in place. Another hazard related to this is the colla... Read all

Molten rock within a volcano or underneath the earth's surface. Once magma reaches the surface it is called lava.

A number that characterizes the relative size of an earthquake. Different scales are used, but the most common is the logarithmic Richter scale. where most quakes are between 0 (tiny) and 9 (extremely large quake). Each step on this scale indicates a 10 fold energy increase of an earthquake.
Felt quakes are normally above magnitude 2.5 on this scale.
Magnitude is based on measurement of the maximum motion recorded by a seismograph(sometimes for earthquake waves of a particular frequency), corrected for attenuation to a standardized distance.
Several scales have been defined, but the most commonly used are (1) local magnitude (ML), commonly referred to as œRichter magnitude, (2) surface-wave magnitude (Ms), (3) body-wave magnitude (Mb), and (... Read all

A mainshock is the largest earthquake in a sequence, sometimes preceded by one or more foreshocks, and almost always followed by many aftershocks.

Minettes are a variety of igneous rock with phenocrysts of biotite, and with or without phenocrysts of hornblende, augite with a high diopside content, and olivine.
Examples where minettes are found include the Navajo Volcanic Field of the Colorado Plateau and the Mexican Volcanic Belt, where he youngest minettes on the earth are found in the Mascota volcanic field. 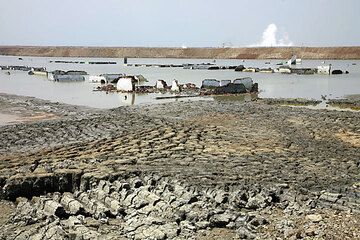 Sidoarjo mud volcano (East Java)
Mud volcanoes are no true volcanoes, but vents that erupt mud, as fine sediemtn is squeezed upwards by prezzurized water, steam and gas escaping from deeper deposits.
A mud volcano is a vent on the surface erupting mud and gas or steam, but no lava. Mud volcanoes are usually not the result of volcanic processes, but more generally related to environments where pressurized deposits at depth occur that release gas and steam, which mixes with fine-grained sediments to form mud. Temperatures are much cooler than at volcanic processes. The largest structures are 10 ... Read all 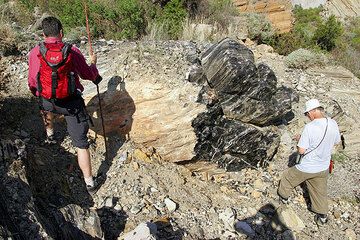 Obsidian from the Rocce Rosse lava flow on Lipari island (Italy)
Black volcanic glass
Obsidian is a naturally occurring glass formed as an extrusive igneous rock. It is produced when felsic lava extruded from a volcano cools rapidly through the glass transition temperature and freezes without sufficient time for crystal growth. Obsidian is commonly found within the margins of rhyolitic lava flows known as obsidian flows, where cooling of the lava is rapid. Because of the lack of cr... Read all 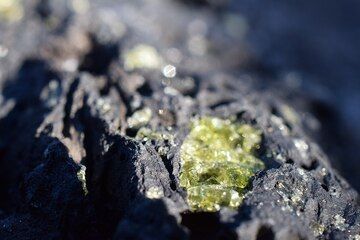 Olivine from basalt lava on Hawai'i (image: By incidencematrix - Basalt with Olivine, CC BY 2.0, Link)
Olivine is one of the earth's most common rock-forming silicate minerals, typically contained in mafic to ultrafafic magmatic rocks with low silica content (e.g. basalt, gabbro, peridotite), which make up much of the earth's upper mantle, the oceanic crust and lava flows etc from basaltic shield volcanoes on land.
Its name refers to its often olive-green color.
Chemically, it combines two interchangeable ions of magnesium (Mg2+) or iron (Fe2+) with one silica ion (Si4+) in a densely-packed crystal lattice. The two end-members from this compositional range are forsterite (magnesium-olivine, Mg2SiO4) and and fayalite (iron-olivine, Fe2SiO4). In rare cases, Mg/Fe can also be replaced by calcium (Ca), manganese (Mn), or nickel (Ni). Read all

Illustration of a P-wave (image: USGS)
The P wave (short for primary wave, also called pressure or compressional wave) is the seismic wave that shakes the rocks forth and back in the same and opposite direction of the propagation direction (longitudinal).
The primary (P) waves of earthquakes are the same type of waves as the more familiar sound waves. Both are waves propagating spherically away from its source through a compressible medium (rocks, fluids and gasses) where particles are swinging in the same and opposite direction of the wave propagation.
Typical speeds of P-waves from earthquakes are between 1450m/s in water and 5000m/s in granite.... Read all

Tropical rainforest, coconut palm beaches, primitive culture and moon-like landscapes, and some of the world's most active and exciting volcanoes. Join us on our expedition to Vanuatu.
Sakurajima crisis 2015

Volcanic crisis at Sakurajima - updates
A strong earthquake swarm and increased inflation were detected in August 2015 and triggered authorities to raise the alert level, as volcanologists think that a larger eruption could follow. News and updates on the events can be found on this page.
Armenia
18-28 Sep 2021

Land of Volcanoes & History
Armenia, a small country in the South Caucasus, has a long dramatic history and a rich cultural heritage. Despite its compact territory, it has much to offer its guests: fascinating mountain landscapes with snowy volcano peaks, beautiful gorges and cliffs, alpine meadows and subtropical forests, monasteries hidden in valleys, archaeological sites and picturesque villages.
Iceland
30 Jul-16 Aug 2021

Colors of Iceland
Discover Iceland's fascinating geology and volcanic activity on this relaxed photo and geo tour! Get to see the new volcanic eruption on the Reykjanes peninsula from close!
El Hierro

El Hierro (Canary Islands) activity
Updates and news about the volcanic unrest at El Hierro volcano, Canary Islands
Get the ad-free version!
Why is there advertising on this site?
Copyrights: VolcanoDiscovery and other sources as noted.
Use of material: Most texts and images, in particular photographs, on this website are protected by copyright. Further reproduction and use of without authorization is usually not consented. If you are not sure or need licensing rights for photographs, for example for publications and commercial use, please contact us.
Home | Travel | Destinations | Volcanoes | Photos | Earthquakes | About | Glossary | News | Contact | Privacy - change consent | Imprint | EN | DE | EL | ES | FR | IT | RU
Follow us: