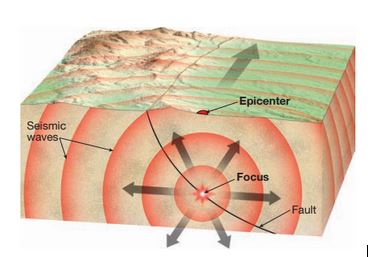 Diagram showing the elements of an earthquake. (source: Tarbuck, Lutgens, and Tasa. 2012. Essentialsof Geology. 11th Ed. Page 337)
During an earthquake, large amounts of energy are released from the hypocenter or focus (i.e. point where the quake occurs) in the form of seismic waves. These cause the vibrations felt during a proper quake.
As a thought experiment, try imagining throwing a pebble in the middle of pond. Ripples will form from the point of contact between the pebble and the water surface, and propagate outwards ... Read all 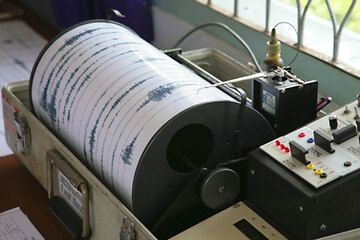 A seismograph at a volcano observatory in Indonesia
An instrument that displays vibrations and movements in the Earth = the recording of a seismometer.
Traditional seismographs transfer the recorded shaking to a precise pencil that writes a continuous shake line onto a sheet of paper wrapped around a turning drum.
The drum slowly turns at steady speed and at the same time, the pencil is slowly moved horizontally, so that the line forms a continuous spiral line on the paper until it is filled. Each turn of the drum (or each line on the unwrapped... Read all 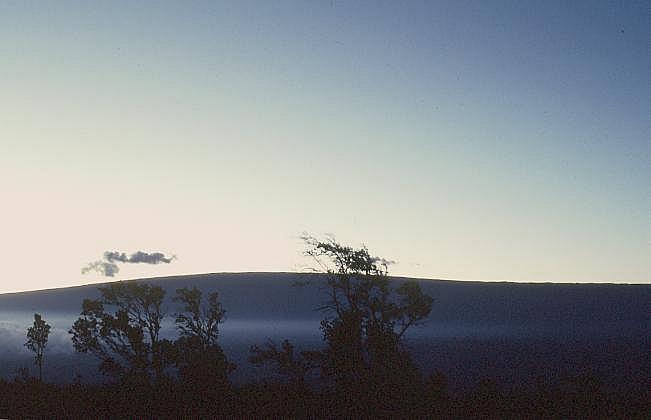 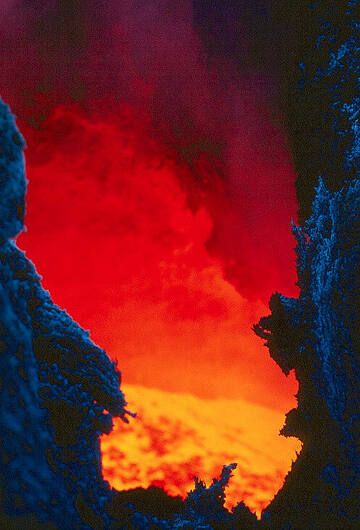 Skylight on Etna volcano (Italy)
Skylights are openings in the roof above a lava tube, from where the flowing lava flow can be seen. Usually, these holes are caused by the simple collapse of the roof of the tube. 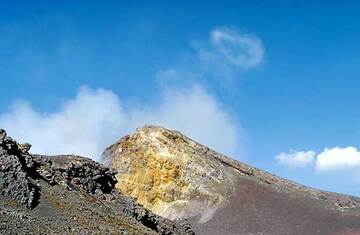 Etna's Bocca Nuova crater in 2000, emitting smoke rings
A rare phenomenon, where a visible vortex ring of steam and gas is expelled from a volcanic vent.
Under special conditions, gas and steam expelled from a vent can form gas rings. It probably requires a particular geolometric configuration of a circular vent exit, as well as expulsion of gas in individual puffs with just the right velocity.
This phenomenon is quite rare, but has been witnessed at several volcanoes, including Stromboli and Etna. At Etna, a spectacular period lasting several mo... Read all

The amount of deformation (change in size, shape, or volume) experienced by a rock as a result of stress.

The force per unit area applied to a rock.

There are different types of stress:
- Uniform: when forces are acting equally in all directions
- Tensional or Extensional: stretches the rock
- Compressional: squeezes the rock
- Shear: causes slippage of the rock along a plane 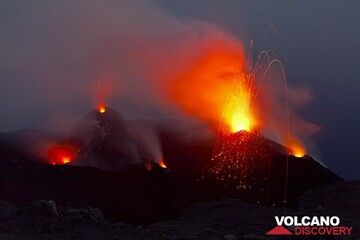 Strombolian eruptions from vents of Stromboli volcano, Eolian Islands, Italy
Strombolian eruptions are the smallest type of explosive eruptions. Strombolian eruptions consist of intermittent, generally relatively small explosions or weak pulsating fountains of fluid (usually basaltic) lava from a single vent or crater.
They are called so after the type locality of Stromboli volcano (Eolian Islands, Italy), which has been in strombolian activity for probably more than 2000 years.
An individual strombolian explosion is the result of sudden release of volcanic gasses. The typical rhythmic occurrence is caused by gradual accumulation of gas bubbles beneath a weakly solidified plug at the top of the magma column at the vent surface until the gas pressure is high enough to erupt through it, ejecting with it both solid and liquid spatter from the magma. Read all

The adjective "tectonic" refers to processes, properties, or resulting features related to the deformation (breaking and slow, plastic deformation) of rocks over large sections of the upper mantle and crust (lithosphere).
It is usually applied to large-scale features and processes, in the km scale and app. Smaller miniature tectonic processes are sometimes called micro-tectonic.

Illustration of the main types of tectonic faults (source: USGS)
Read all

Latest volcano webcam image
Many volcanoes can be observed in real-time using webcams. Look at the latest images collected from our volcano webcam viewer tool.
Kamchatka

Kamchatka photos
A growing list of photo galleries taking during our expeditions in this fantastic part of the world, full of volcanoes, unspoiled nature and colors.
Volcanic ash alert

Find quakes in your area
Look up quakes near your current or any other location of interest worldwide!
Books

Books about Volcanoes
A selection of great books about volcanoes and volcanism, grouped into sections of different reading level interest.
Get the ad-free version!
Why is there advertising on this site?
Sources: VolcanoDiscovery / VolcanoAdventures and other sources as noted.
Use of material: Most text and images on our websites are owned by us. Re-use is generally not permitted without authorization. Contact us for licensing rights.
Volcanoes & Earthquakes