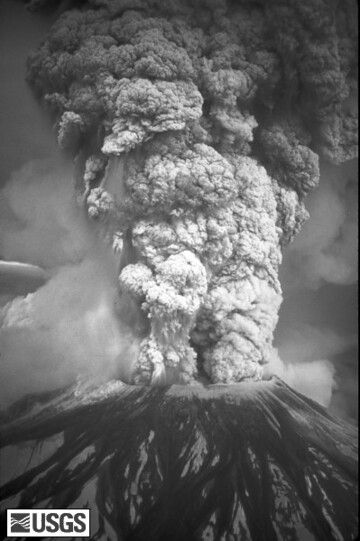 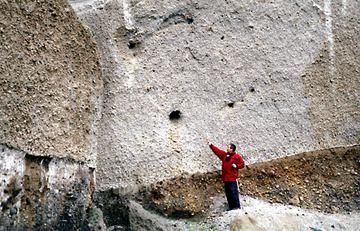 Pumice deposit on Santorini, Greece, from the large Plinian "Minoan" eruption on Santorini in 1613 BC, showing the holes in the pumice where remants of an olive tree could be found and recovered by Tom in 2003. This material allowed the most recent and most precise dating of this eruption to date.
The most explosive and largest type of volcanic eruptions. Plinian eruptions erupt more than 1 cubic kilometer of magma often within less than a few days and produce ash columns that can reach 20-50 km height.
Plinian eruptions are large explosive events that form enormous dark columns of tephra and gas high into the stratosphere (>11 km). Such eruptions are named for Pliny the Younger, who carefully described the disastrous eruption of Vesuvius in 79 A.D. This eruption generated a huge column of tephra into the sky, pyroclastic flows and surges, and extensive ash fall. Many thousands of people evacuated areas around the volcano, but about 2,000 were killed, including Pliny the Older.

Island of Venus
Milos Island in Greece is one of the most beautiful and photogenic islands of the Mediterranean. Its boasts breathtaking scenery of colorful volcanic rocks, some of the finest beaches of the country, a rich archeological heritage, great hospitality and delicious local cuisine. Come join us to explore this magical island on a 6-days geological tour!
Earthquakes

Earthquake monitor
Lists and maps of earthquakes in the world in near real time. Country lists, earthquake archive, and I-felt-it reports.
Colima

Colima volcano photos
This beautiful stratovolcano in western Mexico is one of the most active volcanoes on the American continents. It is known for its often spectacular explosions and sometimes glowing avalanches.
Hawai'i

Volcano Tours on Hawai'i
The Hawaiian Islands are not only home to the most active volcanoes in the world, Kilauea and Mauna Loa on the Big Island, but also boast a unique natural environment. Born by volcanic activity of a very active hot spot in the middle of the Pacific Plate, they are a showcase of natural history.
Volcano Stats

Statistics on active volcanoes
Find out which volcanoes erupted in a given year or month!
Get the ad-free version!
Why is there advertising on this site?
Copyrights: VolcanoDiscovery and other sources as noted.
Use of material: Most texts and images, in particular photographs, on this website are protected by copyright. Further reproduction and use of without authorization is usually not consented. If you are not sure or need licensing rights for photographs, for example for publications and commercial use, please contact us.
Home | Travel | Destinations | Volcanoes | Photos | Earthquakes | About | Glossary | News | Contact | Privacy - change consent | Imprint | EN | DE | EL | ES | FR | IT | RU
Follow us: