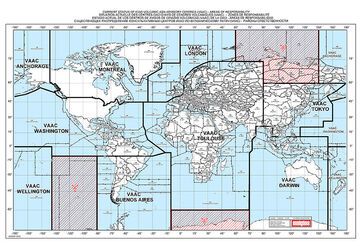 Coverage of the globe by the 9 VAAC.
Volcanic Ash Advisory Centers (VAAC) are research centres who monitor volcanic ash clouds in real time. Each time, a volcano erupts a significant ash cloud, short reports are issued and transmitted directly to air control centres. The 9 VAAC are located in London, Toulouse, Tokyo, Darwin, Anchorage, Washington, Montreal and Buenos Aireas and collectively cover most of the globe.
The Volcanic Ash Advisory Centers (VAAC) are groups of experts and government-funded bodies to montor volcanic ash clouds all over the planet in real time. As Europe experienced in April 2010, volcanic ash clouds are hazardous for aircraft and must be avoided to fly through, even if that means cancellation of flights.

As of 2010, there are 9 VAAC located in different areas and each focussing m... Read all 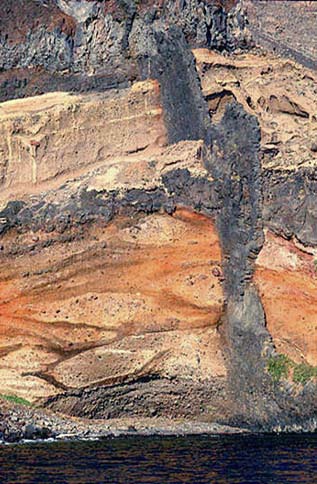 Exposed volcanic dike on Santorini (Greece)
Pathways of rising magma inside vertical fissures.
Dikes are imaginable as the veins of a volcano, the pathways of rising magma. A dike is called a -usually more or less vertical- flat, sheet-like magma body that cuts unconformingly through older rocks or sediments.

Most dikes can be described as fractures into which magma intrudes or from which they might erupt. The fracture can be caused by the intrusion of pressurized magma, or vice versa, ... Read all 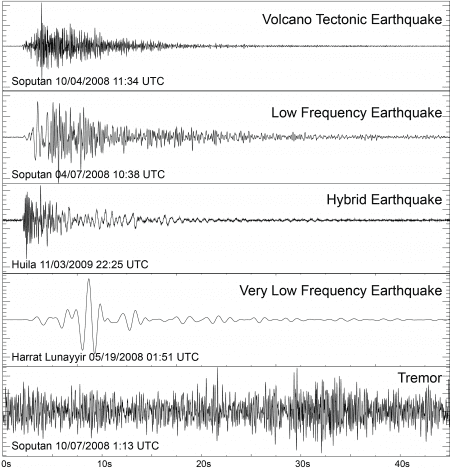 Seismogram signal examples from volcanic earthquakes: Volcano Tectonic (VT) Low Frequency (LF), hybrid (mix of VT and LF), Very Low Frequency (VLF), and Tremor. Volcano name/date in lower left. (image: USGS)
Volcanic tremor is a continuous seismic signal with regular or irregular sine wave appearance and low frequencies (0.5-5 Hz).
Volcanic tremor is usually in the form of harmonic tremor which has a very uniform appearance, whereas spasmodic tremor is pulsating and consists of higher frequencies with a more irregular appearance.
Tremor can be caused by different processes inside the volcano, including resonance triggered by magma flowing through cracks and vents, or continuous low-frequency earthquakes so closely spaced th... Read all

A volcaniclastic rock or loose deposit made of (older) volcanic fragments.

The science of studying volcanoes.
Volcanology comprises the study of volcanoes and volcanic phenomena and is mostly regarded as a sub-part of geology, but is interwoven with other science disciplines as well: chemistry, physics, but also sociology, history, archaeology. Read all 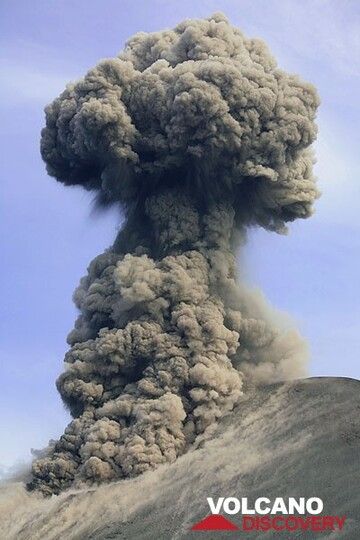 Eruption column from a vulcanian eruption on Krakatau
A vulcanian (note the different term from "volcanic") eruption is an intermediately violent type of explosive eruption, stronger than strombolian explosions but much weaker than Plinian eruptions.
During vulcanian eruptions, a relatively large solid plug is ejected when magmatic gas pressure that had build up beneath it overcomes the strength of the plug.
In the same way as Stromboli island for strombolian eruptions, the term vulcanian was coined after the neighboring island of Vulcano in the Eolian Islands, where such eruptions had been observed during the eruption in 1888.
Vulcanian eruptions can follow longer or shorter intervals of repose during which gasses in the magma beneath the plug slowly build up. The smallest vulcanian explosions typically produce eruption columns of approx 1-2 km height, while larger ones approaching sub-plinian size can erupt columns reaching several to more than 10 kilometers height.
Often, the eruptions are accompanied by violent gun... Read all

Anatomy of a vulcanian explosion
A violent vulcanian-type explosion from Anak Krakatau in pictures step by step.
Volcano Tours

Volcano Expeditions
Witnessing a volcanic eruption from close is an unforgettable experience. We offer a wide variety of tours and expeditions to active volcanoes worldwide.
Volcano Map

Map of currently active volcanoes
See which volcanoes are erupting at the moment! Probably more than you think...
Volcanic features

Types of tours
We offer a broad variety of tours to volcanic areas: volcano expeditions and specials, discovery tours with hiking, photography, nature and culture, pilot tours and private custom tours.
Get the ad-free version!
Why is there advertising on this site?
Sources: VolcanoDiscovery / VolcanoAdventures and other sources as noted.
Use of material: Most text and images on our websites are owned by us. Re-use is generally not permitted without authorization. Contact us for licensing rights.
Volcanoes & Earthquakes