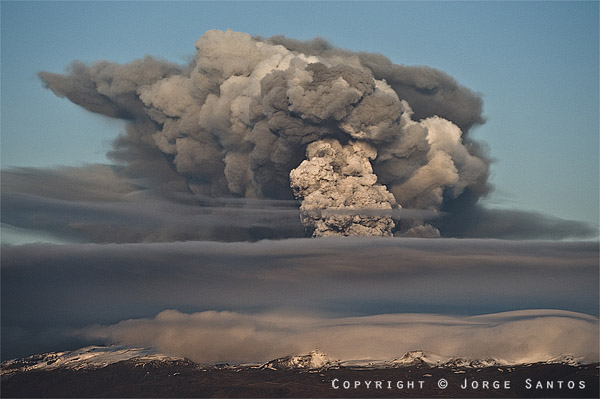 The ash cloud from erupting Eyafjallajökull volcano, which spread over Europe in mid April and led to an unprecedented closure of airspace for almost 7 days over almost all of Europe

Eyafjallajökull volcano (its name meaning Island-Mountain under a glacier) under the small homonymous glacier in southern Iceland erupted spectacularly on 20 March 2010, after having been dormant for almost 200 years. During its most violent phase, the subglacial eruption produced large ash plumes that drifted over Europe and forced an unprecedented closure of airspace over most of Europe for several days in mid April 2010.

Eyjafjöll, located immediately west of Katla volcano, consists of an E-W-trending, elongated ice-covered basaltic-andesite stratovolcano with a 2.5-km-wide summit caldera.
Fissure-fed lava flows occur on both the eastern and western flanks of the volcano, but are more prominent on the western side. Although the 1666-m-high volcano has erupted during historical time, it has been less active than other volcanoes of Iceland's eastern volcanic zone, and relatively few Holocene lava flows are known. The sole historical eruption of Eyjafjöll, during December 1821 to January 1823, produced intermediate-to-silicic tephra from the central caldera.
---
Source: GVP, Smithsonian Institute 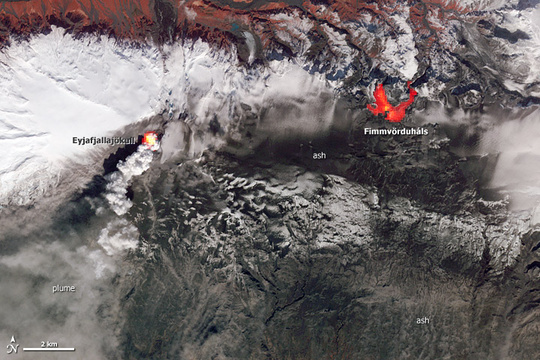 According to a news article from 27 October, a scientist at the University of Iceland Institute of Earth Sciences noted that the eruption of Eyjafjallajökull, that began as a fissure eruption on 20 March 2010 and later continued from the summit caldera on 14 April, was over. Ash was last seen rising from the caldera in June. ... Read all
Try our free app!

From Stromboli to Etna
Get to know some of the most active and interesting volcanoes in the world: famous Mt. Etna on Sicily; Vulcano, in the Ancients'belief home to Vulcanus, God of Fire; Lipari with its spectacular obsidian and pumice deposits; and Stromboli, "Lighthouse of the Tyrrhenian Sea", known for its permanent fireworks!
Mayon

Mayon volcano photos
Mayon on Luzon Island, towering above Legazpi city is famous for being one of the most perfectly symmetrical stratovolcanoes in the world. It is also one of the most active and most dangerous volcanoes (not only) in the Philippines.
Dukono

Dukono volcano photos
Dukono on Halmahera in Indonesia has been in permanent activity for years, often producing ash plumes that drift around the northern part of the island and have become normality.
Volcano Tours