During 1996-97, dike intrusions under the volcano caused several shallow earthquake swarms, but no eruption.
[more]
[hide]
A small shallow earthquake swarm occurred beneath Iliamna during mid-May 1996. Seismic activity increased again on 1 August and during September and the first half of October, 6 to 27 volcanic earthquakes were recorded each day. The activity continued through November, December and Januaray at lower, but still elevated levels (3-16 quaks per day), and slowly declined until by 28 March, seismicity was again at background levels..
The swarm was located 5 km S of the summit at a depth of less than 10 km, where magma is thought to have intruded, but never reached the surface to produce an eruption.
---
Soource: Smithsonian / GVP Iliamna volcano monthly reports

On the morning of 19 March 1987 at 8am, several pilots observed an unusually large steam plume rising about 1000-1100 m above the summit of Iliamna. The plume originated from an area on the upper S flank vent, but did not contain visible ash.
The event is not counted as an eruption, but a period of exceptionally strong degassing from active fumaroles.

A brief steam eruption occurred on 7 November 1978 between 10 and 13 h local time, producing puffs of steam, ejected every 1-5 minutes, that rose an estimated 3 km above the summit. No ash was visible in the steam puffs. No unusual seismic activity was recorded. 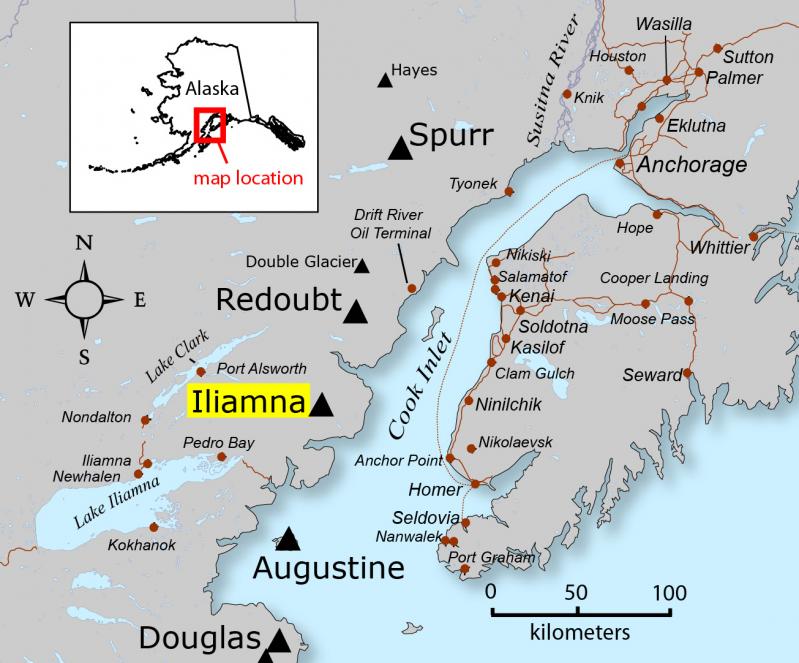 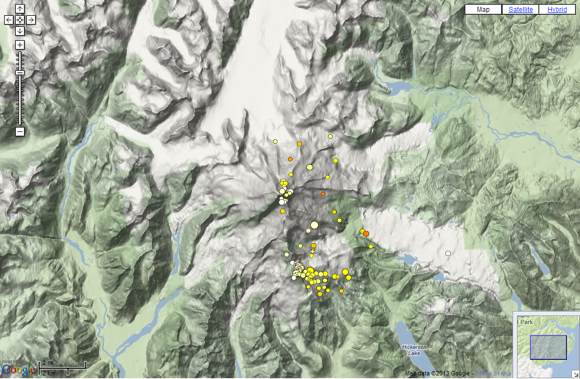 Photos from Kamchatka
Kamchatka in Russia's far east is one of world's remotest regions and has an almost unparalleled density of active volcanoes. Look at photos taken during our expeditions from this wonderful corner of the world!
Kelut lava dome

Kelut volcano's lava dome in 2007
One of the most impressive lava dome eruptions in recent years. A new dome formed in the crater lake of Kelut volcano (East Java) in late 2007. Enjoy some unique pictures.
AllQuakes

Find an earthquake
Look up quakes anywhere in the world, near your city or region!
Volcano Database

Ethiopia and the Danakil
Ethiopia is a very diverse and beautiful country. Thanks to our numerous expeditions to Erta Ale and Dallol and beyond, we have an extensive collection of images showing the volcano's lava lake, the desert, the colorful hot springs of Dallol, the vast salt lakes, camel caravans and more.
Get the ad-free version!
Why is there advertising on this site?
Support us - Help us upgrade our services!
We truly love working to bring you the latest volcano and earthquake data from around the world. Maintaining our website and our free apps does require, however, considerable time and resources.
We need financing to increase hard- and software capacity as well as support our editor team. We're aiming to achieve uninterrupted service wherever an earthquake or volcano eruption unfolds, and your donations can make it happen! Every donation will be highly appreciated. If you find the information useful and would like to support our team in integrating further features, write great content, and in upgrading our soft- and hardware, please make a donation (PayPal or Online credit card payment).