Volcanoes in the Indian Ocean: 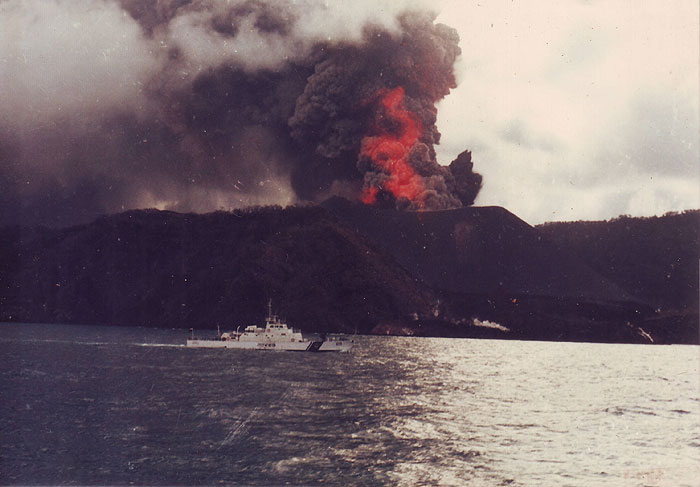 Eruption of Barren Island volcano in 1994
Barren Island, a possession of India in the Andaman Sea about 135 km NE of Port Blair in the Andaman Islands, is the only historically active volcano along the N-S-trending volcanic arc extending between Sumatra and Burma (Myanmar). The 354-m-high island is the emergent summit of... [more] 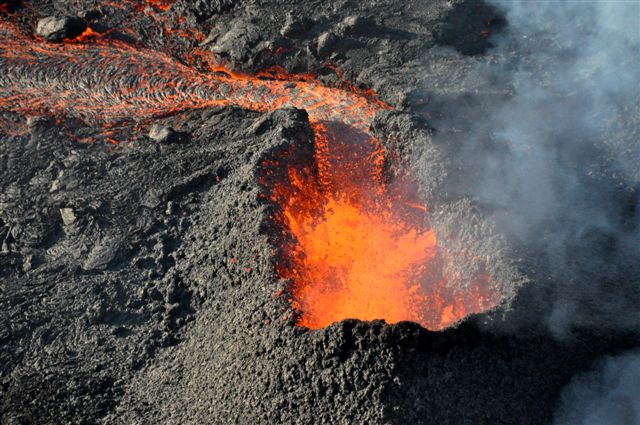 Piton de la Fournaise erupting in 2010 (Photo: Sylvie and Philippe CHOUKROUN)
Piton de la Fournaise, a typical basaltic shield volcano, located on the French island La Réunion, is one of the world's most active and productive volcanoes. It is in a phase of frequent but short-lived eruptions that start with lava fountains and produce large lava flows. Since... [more]

(Submarine volcano? unknown summit elevation)
[more]
First visit to our site? If you havn't done it yet, download the Volcanoes & Earthquakes app to get one of the fastest volcano news online:
Android | IOS

Map of the Indian Ocean, its tectonic plates and active volcanoes (Basemap created UNAVCO Voyager map tool feat. Face of the EarthTM)
There are relatively few volcanoes in the Indian Ocean, most natably the hot-spot volcanoes of Piton de la Fournaise on La Réunion island and Karthala volcano on the Comores.

The first reported eruption of the region was from a written account of an eruption of Karthala volcano between the 10th and 12th century, the next recorded eruption was from the region's most active volcano, Piton de la Fournaise, on the island of Reunion, in 1640. Réunion has recorded more than 150 eruptions since then.

Réunion was claimed by France around 1662 and has been French virtually continuously since then. French settlers began to move in from 1715, and today, 600,000 people live on the 2,510 km2 island. La Réunion is one of France's overseas departments. Piton de la Fournaise volcano is being monitored by one of the world's leading observatories, established in 1980.

The Comoros islands were controlled by Moslem Sultans until occupied by the French in the latter half of the 19th century. After the early eruption mentioned above (1050 AD ± 150) no further reports are known until the early 19th century. The Comoros became a French overseas territory in 1947 and declared independence in 1975.

What clients have said
Browse through feedback about our tours from customers, read what they have said about us!
Erta Ale

Erta Ale volcano photos
During our numerous expeditions to Erta Ale and Dallol, we have documented the active lava lake and its surroundings and changes over the years.
Colima

Colima volcano photos
This beautiful stratovolcano in western Mexico is one of the most active volcanoes on the American continents. It is known for its often spectacular explosions and sometimes glowing avalanches.
Short tours

1-3 day excursions
If you're interested in volcanoes, there are a number of excursions you should not miss if you're in the area: hike to the craters of Stromboli volcano, climb Etna volcano, get to know the unique volcanic history of Santorini - some examples of shorter (1-3 days) tours and excursions we offer.
Largest volcano