1971 eruption
Cerro Negro started a violent eruption from its central vent on 3 February 1971, which consisted in violent strombolian explosions and lava fountains about 500 m tall producing ash columns reaching up to about 10 km, and causing ash fall to the west in up to 80 km distance. Up to 10 cm of ash were deposited in villages near the volcano. The eruption ended on 14 February. ...più


1968 eruption
An explosive and effusive eruption occurred at Cerro Negro volcano around 25 October 1968. A report from 28 Oct reads "tremendous amount of 'smoke'and rock coming out of main cone".
The eruption occurred opened new vents on the south side of the crater, which produced powerful strombolian activity, lava fountains visible from León, and lava flows to the W and SW. Heavy ash fall occurred 10 km from the volcano. 13 villages were evacuated.
The intensity increased on 30 October, when 2 large explosions were observed. A pilot reported the lava flow about 1 km long, 250 wide and 30-40 m thick.
On 4 November, the eruption decreased somewhat. An observer writes: "the new lava vent at the base of Cerro Negro contains a lava fountain shooting molten lava to a height of 30 m into the air. The majority of this material falls back into the pool."
Around 10 November, the eruption intensity picked up again. On 18 Nov, an eruption cloud reached 2-3 km altitude, and lava fountains and continuous ash emissions were observed at the vents. A second lava flow had formed traveling to the SE.
Activity continued in similar ways until 7 December, when it sharply decreased and ended on 10 December.
A series of weak explosions occurred again a year later, in December 1969.
Latest satellite images 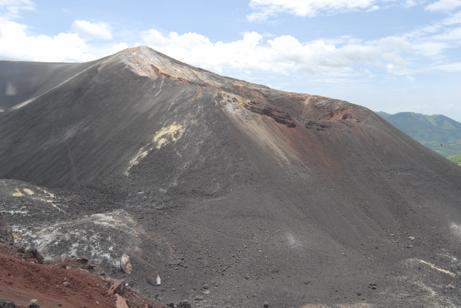 An unusual number of earthquakes have been noted near the volcano recently, prompting authorities to warn tourists and locals not to climb the volcano, local press reports. Read all
Wed, 12 Jun 2013, 14:25
Cerro Negro volcano (Nicaragua) activity update

Seismic activity has returned to low levels. ... Read all
Try our free app!

Volcano Calendar 2013
Our first printed volcano calendar, featuring a paroxysm of Etna, a vulcanian explosion of Krakatau, and much more!
Greece earthquakes

Latest quakes in Greece
Greece has a lot of earthquake activity, but most of them occur around the margin of the Aegean microplate. The Cycladic islands are located in its center and therefore seismically comparably quiet.
Earthquakes 2016

Top 20 quakes in 2016
Several magnitude 7 quakes occurred in 2016 (but none above M8): Papua New Guinea, NZ, Ecuador, Solomon Islands, Sumatra, Chile, Alaska and others - nearly all major earthquakes were located near active subduction zones.
See the top 20 list of largest quakes in 2016 with this map.
Smoke rings

Anatomy of a vulcanian explosion
A violent vulcanian-type explosion from Anak Krakatau in pictures step by step.
Why is there advertising on this site?
Support us - Help us upgrade our services!
We truly love working to bring you the latest volcano and earthquake data from around the world. Maintaining our website and our free apps does require, however, considerable time and resources.
We need financing to increase hard- and software capacity as well as support our editor team. We're aiming to achieve uninterrupted service wherever an earthquake or volcano eruption unfolds, and your donations can make it happen! Every donation will be highly appreciated. If you find the information useful and would like to support our team in integrating further features, write great content, and in upgrading our soft- and hardware, please make a donation (PayPal or Online credit card payment).