Our monitoring service AllQuakes received reports of shaking caused by a seismic-like event, possibly an earthquake, in or near Near Mexico City, Mexico City, Mexico at around 22:58 GMT. Unless confirmed by at least one national or international seismological agency, its status as possible earthquake remains unconfirmed. This may or may not turn out to be an actual naturally occurring quake.
Quake Data | Interactive map | User Reports | Earlier quakes in same area | Quakes in Mexiko | Mexico City 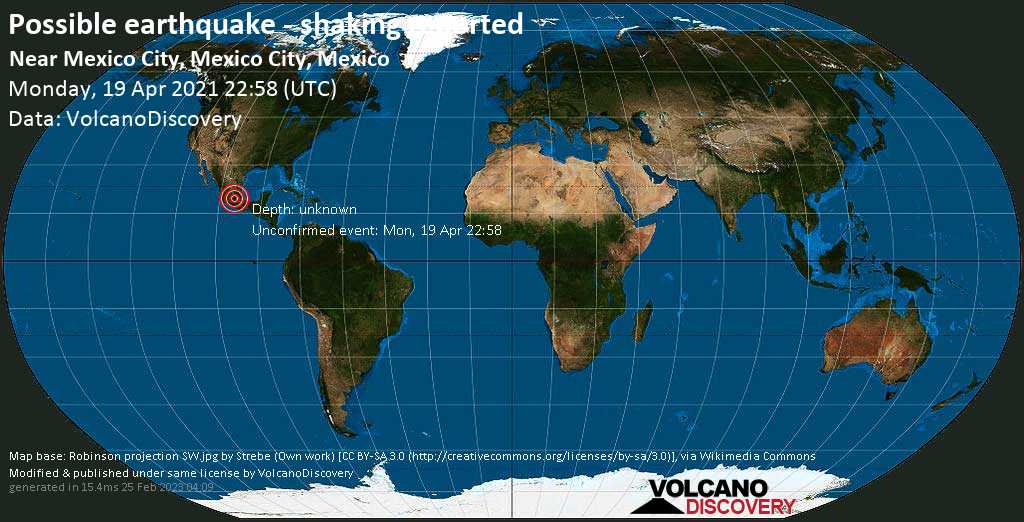 19 Apr 23:00 UTC: Primo a segnalare: VolcanoDiscovery dopo 1 minuto.
Update Mon, 19 Apr 2021, 23:16
Earthquake reported few minutes ago near Mexico City, Mexico City, Mexico
We are receiving unverified early reports of seismic activity in or near Mexico City, Mexico City, Mexico on 19 Apr 2021 (GMT) at approximately 22:58.
There are no details yet on the magnitude or depth of this earthquake. We expect more accurate data to emerge in the next few minutes. The location and magnitude mentioned are indicative and temporary until the AllQuakes monitoring service receives more exact scientific data from a national or international seismological agency. Check back here shortly and stay safe.
Download the Volcanoes & Earthquakes app to get one of the fastest seismic alerts online:
Android | IOS

(Mexico City, Messico)
Vulcano più vicino: Chichinautzin (40 km / 25 mi)
Fonte dati primaria: VolcanoDiscovery
[Visualizza mappa]
Show interactive Map
[smaller] [bigger]
If you felt this quake (or if you were near the epicenter), please share your experience and submit a short "I felt it" report! Other users would love to hear about it!
Also if you did NOT feel the quake although you were in the area, please report it! Your contribution is valuable also to earthquake science and earthquake hazard analysis and mitigation efforts. You can use your device location or the map to indicate where you were during the earthquake. Thank you!