Our monitoring service AllQuakes received reports of shaking caused by a seismic-like event, possibly an earthquake, in or near Near Portland, Oregon, USA at around 15:35 GMT. Unless confirmed by at least one national or international seismological agency, its status as possible earthquake remains unconfirmed. This may or may not turn out to be an actual naturally occurring quake.
Quake Data | Interactive map | User Reports | Earlier quakes in same area | Quakes in the US | Oregon 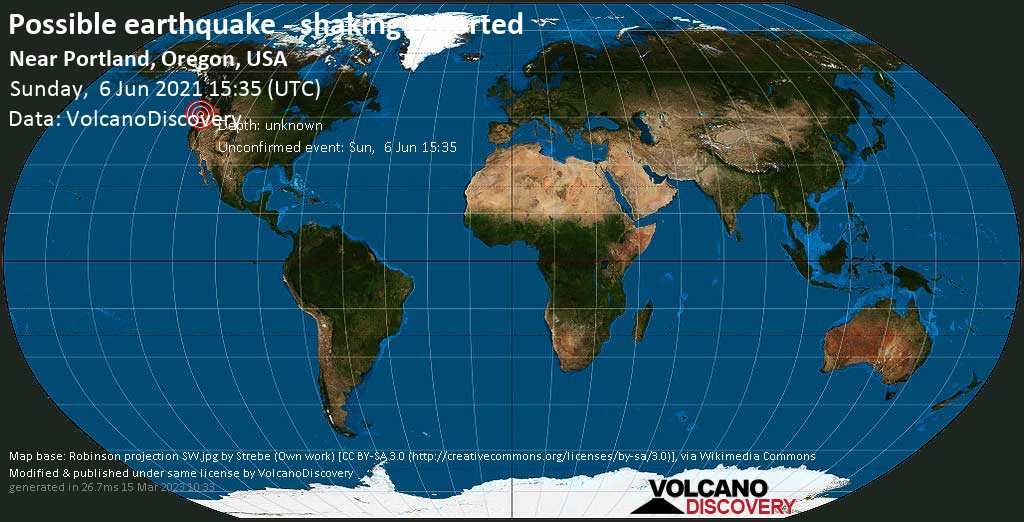 (Contea di Washington, Oregon, Stati Uniti)
Vulcano più vicino: West Crater (67 km / 42 mi)
Fonte dati primaria: VolcanoDiscovery
[Visualizza mappa]
Show interactive Map
[smaller] [bigger]
If you felt this quake (or if you were near the epicenter), please share your experience and submit a short "I felt it" report! Other users would love to hear about it!
Also if you did NOT feel the quake although you were in the area, please report it! Your contribution is valuable also to earthquake science and earthquake hazard analysis and mitigation efforts. You can use your device location or the map to indicate where you were during the earthquake. Thank you!

User reports estimate the perceived ground shaking intensity according to the MMI (Modified Mercalli Intensity) scale.
Contribute:
Leave a comment if you find a particular report interesting or want to add to it.
Flag as inappropriate.
Mark as helpful or interesting.
Send your own user report!
Portland Oregon (0 km WSW of epicenter) [Map] / Very weak shaking (MMI II) / horizontal (sideways) swinging / 10-15 s : I was asleep and in my dream I was shaking I woke up and the whole bed was shaking. A little bit and then a lot and then it tremor for a second
Portland (0 km WSW of epicenter) [Map] / Weak shaking (MMI III) / horizontal (sideways) swinging / 5-10 s : It woke me up from sleeping | One user found this interesting.
BEAVERTON / not felt
Woodburn oregon / Weak shaking (MMI III) / single vertical bump / very short : My son said during the middle of the night he woke up to shaking in his room and the TV was moving a little bit.
Beaverton / Very weak shaking (MMI II) / rattling, vibrating / 2-5 s
Beaverton / Very weak shaking (MMI II) / rattling, vibrating
Tualatin / not felt
Look up aftershocks or earlier quakes
Try our free app!