Gamalama (Peak of Ternate) is a near-perfect conical stratovolcano that forms the entire island of Ternate off the western coast of Halmahera. It is one of Indonesia's most active volcanoes.

The island of Ternate was a major regional center in the Portuguese and Dutch spice trade for several centuries, which is the main reason the historic activity of Gamalana volcano is so well dosumented. Eruptions, recorded frequently since the 16th century, typically originated from the summit craters, although flank eruptions have occurred in 1763, 1770, 1775, and 1962-63. Some eruptions such as in 1771, 1773, 1775, 1838, 1871, and as lately as in 1962 caused fatalities. 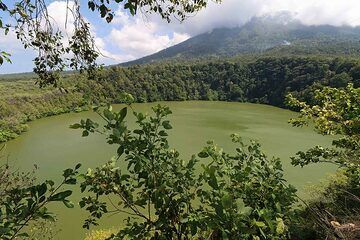 2007-2008 eruption
Seismic activity increased at Gamalama volcano beginning 20 August 2007 and a few days later, there was a small eruption. On 23 August, white and gray plumes rose to an altitude of 2.1 km. Authorities banned access within a 2-km radius of the active crater.
Activity continued into 2008 with weak occasional ash and steam emissions. On 11 May 2008, CVGHM reported that emissions from Gamalama had risen to higher altitudes during the previous two days. On 10 May, white-to-gray plumes rose to an altitude of 1.8 km and drifted N. On 11 May, white plumes increased throughout the day from 1.7 to 2.2 km altitude.
---
Source: GVP monthly reports


2003 eruption: pyroclastic flows and ash fall on Ternate
On 31 July, a series of strong explosions occurred, producing ash plumes up to 2 km above the crater. A pyroclastic flow traveled down Togorar valley on the NE flank of Gamalama volcano.
On 1 August, ashfall was 1-3 cm thick in the E part of the island and some of the local population was evacuated. Ternate town ca. 7 km east of Gamalana was covered with thick ash. There were no reports of casualties or damage.
Ash explosions continued until October 2003.


1994 Aug 5 eruption: 3 km high ash plume
An unusually powerful and sudden eruption occurred on 5 August 1994 at 21h25 local time, producing an ash cloud reaching 3 km above the summit and strong ash fall in nearby areas. An aviation warning was issued for the area.
A felt earthquake a few minutes before the eruption had an intensity of MM II-III. Smaller eruptions happened in the following days and weeks, such as on 14 August when there was ashfall in Ternate. The frequency of eruptions in this period was 5-20 minor explosions/day.
---
Source: GVP monthly reports


1980 eruption: 40,000 people evacuated
Gamalama Volcano started erupting on 4 September 1980 ejecting incandescent tephra and glowing bombs to up to 1 km distance. A new crater was formed on the ENE side of the summit.
On 5 Sep eruptions caused forest fires and ash fall over large parts of the island. At Ternate City 7 km E of the crater ash fall reached 10 cm. About 40,000 people evacuated to Tidore Island. A new crater formed ENE of the summit. Eruptions continued until the end of September 1980. ...più
Latest satellite images First visit to our site? If you havn't done it yet, download the Volcanoes & Earthquakes app to get one of the fastest volcano news online:
Android | IOS
Latest news
Wed, 6 May 2020, 06:59
Gamalama volcano (Halmahera, Indonesia): white plume yesterday 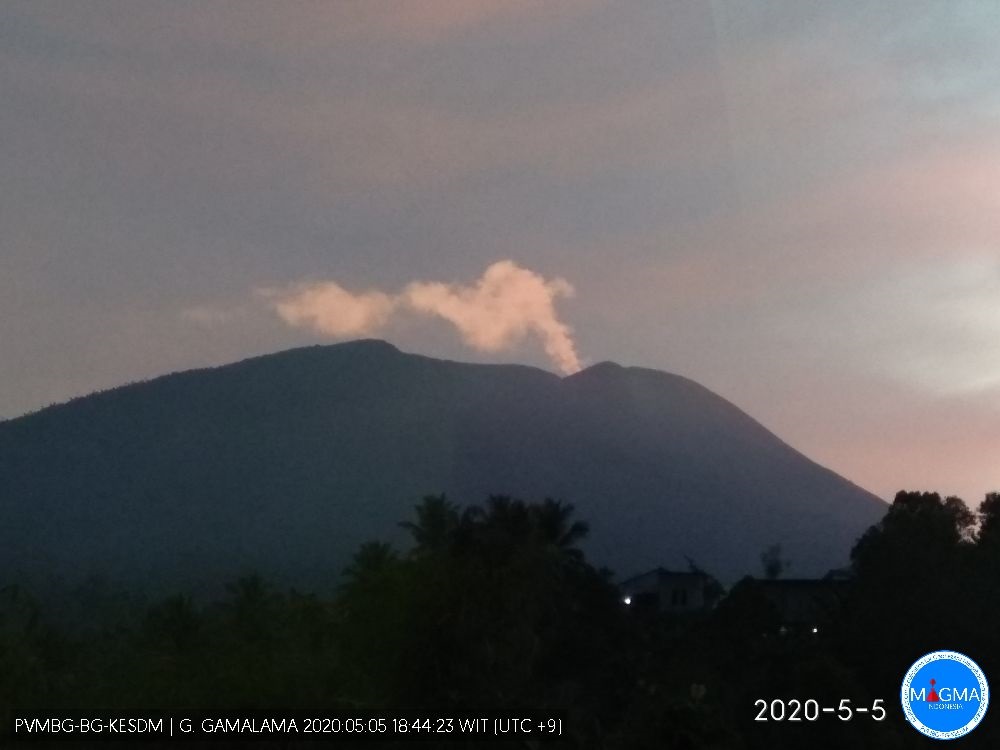 Volcanic eruption in Iceland 2021
A new fissure eruption started on Iceland's Reykjanes peninsula in Mar 2021. Follow the latest news and updates on this remarkable event!
Books

Books about Volcanoes
A selection of great books about volcanoes and volcanism, grouped into sections of different reading level interest.
Volcano Explodes

Anatomy of a vulcanian explosion
A violent vulcanian-type explosion from Anak Krakatau in pictures step by step.
Vesuvius volcano

One of the world's most famous volcanoes looming over the City of Naples
Why is there advertising on this site?
Support us - Help us upgrade our services!
We truly love working to bring you the latest volcano and earthquake data from around the world. Maintaining our website and our free apps does require, however, considerable time and resources.
We need financing to increase hard- and software capacity as well as support our editor team. We're aiming to achieve uninterrupted service wherever an earthquake or volcano eruption unfolds, and your donations can make it happen! Every donation will be highly appreciated. If you find the information useful and would like to support our team in integrating further features, write great content, and in upgrading our soft- and hardware, please make a donation (PayPal or Online credit card payment).