The archipelago of Indonesia consists of more than 13,000 islands, spread over an area that is similar in size to that of the continental United States. It is the country with the greatest number and density of active volcanoes.

Most volcanoes in Indonesia belong to the Sunda Volcanic Arc, streching over 3,000 kilometers from NW Sumatra to the Banda Sea. This volcanic arc results from the subduction of Indian Ocean crust beneath the Asian Plate and includes 76% of the region's volcanoes. To the NNW, the basaltic volcanism of the Andaman Islands results from short spreading centers, and to the east the Banda Arc reflects Pacific Ocean crust subducted westward. North of this arc, the tectonic setting is much more complex: several fragments of plates are converging  to form multiple subduction zones, mainly oriented N-S. These produce the Sulawesi-Sangihe volcanoes on the west and Haimahera on the east of the collision zone.

Indonesia leads the world in many volcano statistics. It has the largest number of historically active volcanoes (76), its total of 1,171 dated eruptions is only narrowly exceeded by Japan's 1,274, although not much is know about the volcanic activity in the time before European colonialists arrived from the 15th century on. Indonesia has suffered the highest numbers of eruptions producing fatalities, damage to arable land, mudflows, tsunamis, domes, and pyroclastic flows. Four-fifths of Indonesian volcanoes with dated eruptions have erupted in this century.

Two of the most devastating volcanic eruptinos in historic time took place in Indonesia: the enormous eruption of Tambora in 1815,- the largest known eruption of the world during historical times,- had such far-reaching effects on the climate that for instance Europe was to experience 1816 as the year without summer. In 1883, the disastrous eruption of Krakatau carved itself deeply into the collective memory of mankind. The eruption of Krakatau was followed by severe tsunamis that killed about 30-40,000 people.

In 1920, a volcano survey was established by the Dutch-led government, leading to much improved volcano monitoring and reporting. The Volcanological Survey of Indonesia (VSI) now operates a network of 64 volcano observatories continuously monitoring 59 volcanoes. 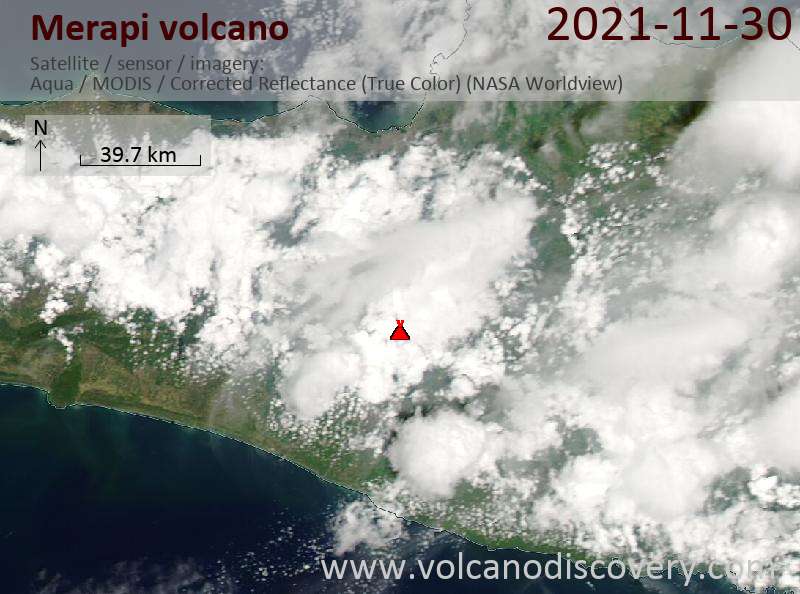 Mon, 29 Nov 2021, 05:01
Iliwerung volcano (Lomblen Island, Indonesia): submarine eruption likely, alert level raised
A submarine eruption has likely occurred in the southern part of the Iliwerung volcano complex at about 21:52 local time yesterday as bubbles in the local water were being observed. The eruption lasted approx. 1 hour. An ash plume can be seen rising about 100 meters above sea level. ... Read all

Sakurajima volcano photos
One of the world's most active volcanoes, Sakurajima on Japan's Kyushu Island is famous for its frequent vulcanian explosions, often accompanied by eruption lightning.
Support us
If you find the website useful and would like to support us and help keep it alive and improve it, please consider making a small donation. Thank you!
Tour photos

The subplinian eruption of Kelut volcano
Fascinating satellite images, reports, and pictures about the massive explosion of Kelut volcano in East Java on 13 Feb 2014.
Why is there advertising on this site?
Support us - Help us upgrade our services!
We truly love working to bring you the latest volcano and earthquake data from around the world. Maintaining our website and our free apps does require, however, considerable time and resources.
We need financing to increase hard- and software capacity as well as support our editor team. We're aiming to achieve uninterrupted service wherever an earthquake or volcano eruption unfolds, and your donations can make it happen! Every donation will be highly appreciated. If you find the information useful and would like to support our team in integrating further features, write great content, and in upgrading our soft- and hardware, please make a donation (PayPal or Online credit card payment).