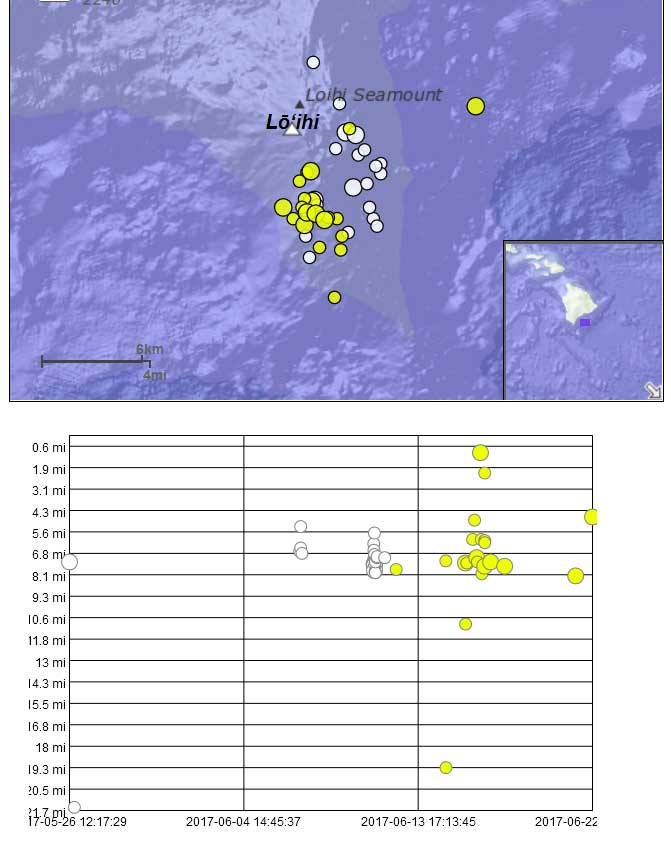 Recent earthquakes under Loihi volcano (Hawai'i)
Since late May, the volcano hidden beneath the Pacific south of Big Island has been showing markedly increased seismic activity. Several earthquake swarms were detected under the volcano.
This probably suggest that magma has been intruding into the volcanic edifice recently. Whether it also indicates that the volcano is currently erupting or about to do so, remains unknown.
Due to its great depth (about 1000 meters below the sea surface), eruptions from Loihi are difficult to detect with certainty and would not show any visible signs on the surface. The water pressure is too large to prevent any explosive activity reach the surface and erupted material is dispersed too quickly to reach the surface in significant quantities.

So far, there have been 4 recent seismic swarms:
1: The first earthquake swarm occurred on 26 May 2017 under the southern rift zone of the volcano, at approx. 11 km depth.

2: The second swarm comprised a few shocks on 7 and 8 June also under the southern rift zone at 8-11 km depth.

3: The third swarm took place between 11 and 12 June at depths between 12.5 and 9 km, with scattered locations under the eastern slope of Loihi.

4: The fourth earthquake swarm, so far the largest, occurred between 15-18 June with hypocenters between 1.5-17 km under the southern rift zone.

Since then, only two small quakes of magnitudes around 2 have been detected on 22 and 23 June, under the eastern and southern flanks at 13 and 8 km depth.

On 10 September an earthquake swarm began at Loihi. The swarm began with a M 5 earthquake and was followed by M 3.5-4.5 earthquakes until at least 11 September. This was the most severe swarm at Loihi since July 1996, when the summit collapsed. ... Read all
First visit to our site? If you havn't done it yet, download the Volcanoes & Earthquakes app to get one of the fastest volcano news online:
Android | IOS
Loihi vulcano
Submarine volcano -975 m / - 3,199 ft
United States, Hawaiian Islands, 18.92°N / -155.27°W
Stato attuale: normal or dormant (1 di 5)
notizie/Updates | Earthquakes | Books
Eruzioni del vulcano Loihi:
1996
Stile eruttivo tipico
non specificato
Latest nearby quakes
Latest satellite images
Try our free app!

The term for all fine-grained volcanic products fragmented during explosive eruptions.
Iceland
16-30 Jul 2022

Colors of Iceland
Mighty waterfalls, hot pools and geysers, giant glaciers , ... Explore the variety of Iceland´s landscapes learn how they were formed through tectonic plates drifting apart and different types of volcanism.
Sakurajima

Sakurajima volcano photos
One of the world's most active volcanoes, Sakurajima on Japan's Kyushu Island is famous for its frequent vulcanian explosions, often accompanied by eruption lightning.
Pilot tours

Exploring the unknown
We sometimes invite you to "test" new itineraries or destinations with us. Such trips are a reduced cost and require a higher degree of flexibility, but often offer a great deal of adventure.
Volcano Specials

Volcano Special Tours
We organize tours to particularly active volcanoes and during ongoing eruptions for extended observation time from various viewpoints. These trips, exclusively for very small groups, are often announced only at short notice and require fast travel and flexibility. Each trip is accompanied by a volcanologist from our team. Examples include: Kilauea (Hawai'i), Colima (Mexico), Krakatau and many others.
Why is there advertising on this site?