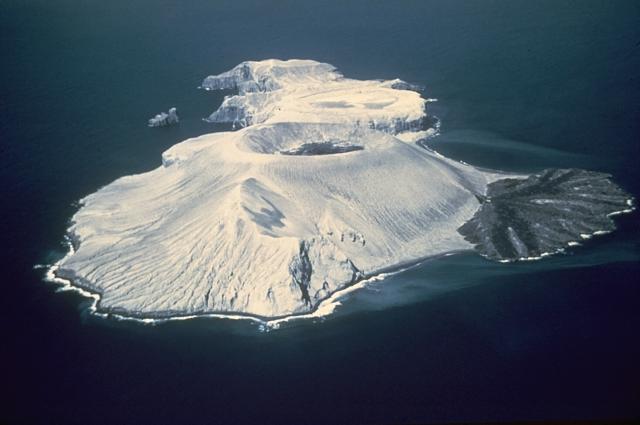 Bárcena volcano here from the SW in March 1955. The tuff cone with the circular summit crater containing a lava dome, and the lava delta to the right formed during the 1952-53 eruption. Photo by Adrian Richards, 1955 (U.S. Navy Hydrographic Office).
Barcena volcano forms the southern part and most significant feature of Isla San Benedicto, the 3rd largest and north-easternmost of the 4 Islas Revillagigedo islands about 350 km south of Cabo San Lucas, Baja California.
The volcano formed by eruptions during 1952-53 and c... [più]

(lava dome 223 m / 732 ft)
Cerro Prieto volcano is a small dacitic lava dome in the Cerro Prieto geothermal field at the northern end of the Gulf of California, 33 km south of Mexicali at the Mexican border or 175 km SE of San Diego. [più]

(Campo vulcanico 780+ m / 2,559 ft)
Comondú-La Purísima volcano is a volcanic field of about 9000 sq km in southern Baja California, west of the Sierra de la Giganta.
Volcanic activity of La Purısima dates back about 10 million years ago, but might have continued into the Holocene (i.e. less than 10,000 years... [più]

(stratovulcano 440+ m / 1,444 ft)
Coronado volcano is a small stratovolcano in the Gulf of California. It forms a 2 km wide peninsula at the northern tip of Coronado Island, 3 km off the eastern coast of Baja California in the Canal de los Ballenas.
The roughly 440-m-high volcano contains a 300 x 160 m wid... [più]

(Caldera 1300+ m / 4,265 ft)
El Aguajito volcano (also known as Santa Ana caldera) is a large 10 km wide caldera at the coast of the Gulf of California, northwest of the older La Reforma caldera. The caldera formed during massive eruptions about 760,000 years ago in what would be called a super-volcano erupt... [più]

(vulcano a scudo 1100 m / 3,609 ft)
Guadalupe volcano is a mostly submerged volcano that forms the island of the same name 250 km west off the coast of Baja California. The volcano was built on the old axis of an ancient spreading center and consists of 2 overlapping shields, the southern of which is the older.

(tuff cone 180? m / 591 ft)
Isla San Luis volcano forms the largest of the 7 Encantada islands in the northern part of the Gulf of California, about 3 km offshore. It is 4.5 sq km large and consists of a 180 m high cone with a narrow peninsula on the SW end.
It is not known when the volcano last erup... [più]

(vulcano a scudo 210+ m / 689 ft)
Isla Tortuga volcano is a young basaltic shield volcano that forms the small 4 km wide island of the same name located 40 km off the Baja coast in the Gulf of California.
The volcano has a circular summit caldera, about 100 m deep, containing a frozen lava and several cind... [più]

(Campo vulcanico 960? m / 3,150 ft)
Jaraguay volcano is a volcanic field located between Jaraguay and Arroyo San José on the western side of Baja California, Mexico. It contains cinder cones and associated basaltic and basaltic-andesite lava flows, some of which are probably less than about 5000 years old. [più]

(coni di cenere 1200+ m / 3,937 ft)
Pinacate volcano is a young volcanic field of maars, tuff rings, more than 500 basaltic cinder cones in the Sonoran desert in NW Mexico, a nearly unpopulated region between Arizona and the Gulf of California. The field covers an area of about 60 x 55 km and has been active less t... [più]

(lava dome unknown elevation)
Punta Púlpito volcano is a lava dome which formed about 500,000 years ago on a small peninsula at the Gulf of California east of the southern tip of Bahía Concepción.
It is included in the catalogue of potentially active volcanoes because it still has an active geothermal ... [più]

(Campo vulcanico 1360+ m / 4,462 ft)
San Borja volcano, also known as El Rosarito, is a volcanic field in central Baja California NE of the Vizcaino Peninsula. There are young cinder cones and lava flows near Rosarito and Morro San Domingo at the western end of the field and along the coast north of the Vizcaino Pen... [più]

(vulcano a scudo 1050 m / 3,445 ft)
Socorro volcano forms the SE-most of the Revillagigedo Islands south of Baja California. It is the summit of a very active, large, mostly submarine basaltic shield volcano. Its summit is capped by a largely buried, 4.5 x 3.8-km-wide summit caldera.
A submarine eruption occu... [più]

(stratovolcanoes 1940+ m / 6,365 ft)
Tres Vírgenes volcano is a complex of 3 stratovolcanoes, El Viejo, El Azufre, and La Virgen, in east-central Baja California and the only larger volcano on the peninsula.
Possible eruptions occurred in 1746 and 1857.
A geothermal plant is located at the northern end ... [più]

(vulcano sottomarino unknown depth)
A possible submarine eruption occurred on or before 20 July 1953 off the western coast of Baja California from an unknown submarine volcano.
The report came from sailors on fishing boats who observed great numbers of dead fish and mud bubbling up at sea 2 km from San Crist... [più]
First visit to our site? If you havn't done it yet, download the Volcanoes & Earthquakes app to get one of the fastest volcano news online:
Android | IOS

VolcanoDiscovery tours
A selection of our most popular trips, which we have been offering and improving over many years now: Stromboli & Etna, Santorini, Java, Ethiopia, Nyiragongo and more. Have a look!
El Hierro

Volcano Tours on Hawai'i
The Hawaiian Islands are not only home to the most active volcanoes in the world, Kilauea and Mauna Loa on the Big Island, but also boast a unique natural environment. Born by volcanic activity of a very active hot spot in the middle of the Pacific Plate, they are a showcase of natural history.
Volcano Specials

Volcano Special Tours
We organize tours to particularly active volcanoes and during ongoing eruptions for extended observation time from various viewpoints. These trips, exclusively for very small groups, are often announced only at short notice and require fast travel and flexibility. Each trip is accompanied by a volcanologist from our team. Examples include: Kilauea (Hawai'i), Colima (Mexico), Krakatau and many others.
La Palma Eruption29 Nov - 03 Dec 21

La Palma Volcano Special
We offer a short-notice tour to see the eruption on La Palma in a small group guided by a volcanologist (Evelyne Pradal - English and French speaking geologist.)
Why is there advertising on this site?