Mount Tarawera, located 24 km SE of Rotorua, is the main vent of the Okataina volcanic complex. Tarawera produced one of New Zealand's largest historic eruptions in 1886, when a violent explosive basaltic eruption occurred that killed an estimated 120 people. The fissures that opened up run for about 17 kilometres northeast-southwest.

The massive, dominantly rhyolitic Okataina Volcanic Centre is surrounded by extensive ignimbrite and pyroclastic sheets produced during multiple caldera-forming eruptions. Numerous lava domes and craters erupted from two subparallel NE-SW-trending vent lineations form the Haroharo and Tarawera volcanic complexes.
Lava domes of the Haroharo complex, at the northern end of the Okataina Volcanic Centre, occupy part of the 16 x 26 km Pleistocene Haroharo caldera, which formed incrementally between 300,000 and 50,000 years before present (BP). The oldest exposed rocks on the caldera floor are about 22,000 years old. The Tarawera complex at the southern end of Okataina consists of 11 rhyolitic lava domes and associated lava flows. The oldest domes were formed as late as about 15,000 years BP, and the youngest were formed in the Kaharoa eruption about 800 years BP. The NE-SW Tarawera vent lineation extends from the two dacitic cones of Maungaongaonga and Mangakakaramea on the SW to Mount Edgecumbe on the NE. Construction of the Haroharo and Tarawera complexes impounded lakes Rotoiti, Totoehu, Okataina, and Tarawera against the outer margins of the Okataina ring structure. A major hydrothermal area is located at Waimangu; the world-renowned Pink and White Terrace siliceous sinter deposits were destroyed during the major basaltic explosive eruption of 1886.
---
Smithsonian / GVP volcano information 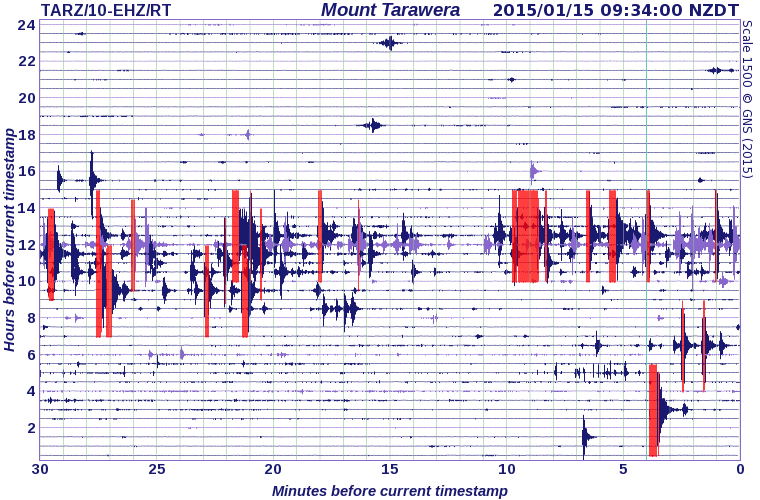 A swarm of small earthquakes occurred during 14-15 Jan near Lake Rotomahana. ... Read all
Try our free app!

Sakurajima volcano photos
One of the world's most active volcanoes, Sakurajima on Japan's Kyushu Island is famous for its frequent vulcanian explosions, often accompanied by eruption lightning.
Why is there advertising on this site?
Support us - Help us upgrade our services!
We truly love working to bring you the latest volcano and earthquake data from around the world. Maintaining our website and our free apps does require, however, considerable time and resources.
We need financing to increase hard- and software capacity as well as support our editor team. We're aiming to achieve uninterrupted service wherever an earthquake or volcano eruption unfolds, and your donations can make it happen! Every donation will be highly appreciated. If you find the information useful and would like to support our team in integrating further features, write great content, and in upgrading our soft- and hardware, please make a donation (PayPal or Online credit card payment).