We visited Batu Tara from 30 June - 4 July on our recent Volcano Special tour and observed strombolian eruptions of varying intensity at intervals ranging between 10 and 50 minutes.
The strongest explosions caused loud cannon-shot like noises and produced abundant incandescent ejections that reached heights and distances of up to approx. 500 m from the crater. They were followed by glowing avalanches of blocks rolling down the sciara to the sea.
On 3 occasions within 16 hours between the evening of 2 and morning of 3 July, unusually strong eruptions produced small pyroclastic flows triggered by collapsing material from the eruption and small parts of the crater rim. These flows traveled down the sciara and over the sea for up approx. 200 meters. 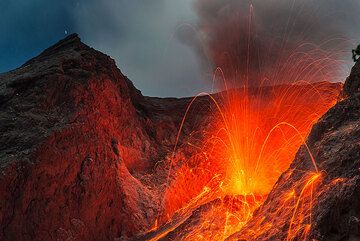 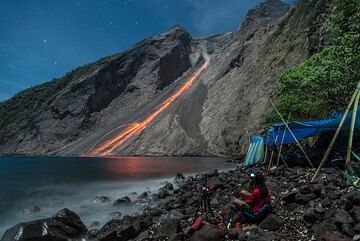 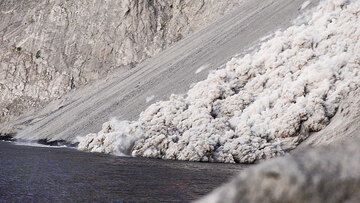 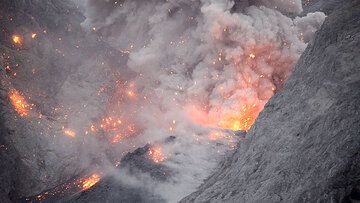 VolcanoDiscovery tours
A selection of our most popular trips, which we have been offering and improving over many years now: Stromboli & Etna, Santorini, Java, Ethiopia, Nyiragongo and more. Have a look!
Tour photos

Earthquake monitor
Lists and maps of earthquakes in the world in near real time. Country lists, earthquake archive, and I-felt-it reports.
Short tours

1-3 day excursions
If you're interested in volcanoes, there are a number of excursions you should not miss if you're in the area: hike to the craters of Stromboli volcano, climb Etna volcano, get to know the unique volcanic history of Santorini - some examples of shorter (1-3 days) tours and excursions we offer.
Ijen flames

Blue flames of burning sulfur
Ijen volcano in East Java has one of the most impressive sulfur deposits on earth. They are so hot that the sulfur often ignites - a mysterious display at night caught on camera.
Why is there advertising on this site?
Sources: VolcanoDiscovery / VolcanoAdventures and other sources as noted.
Use of material: Most text and images on our websites are owned by us. Re-use is generally not permitted without authorization. Contact us for licensing rights.
Volcanoes & Earthquakes