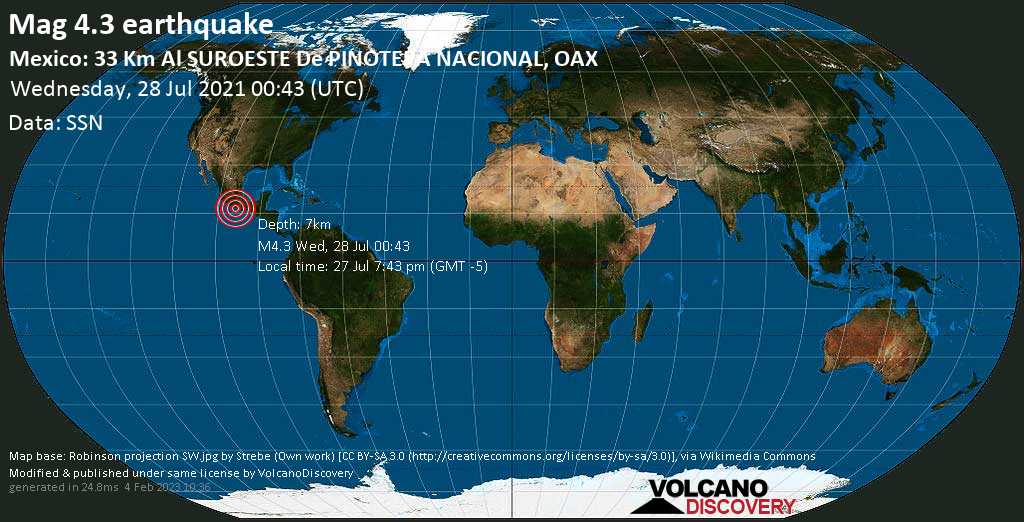 28 Jul 01:00 UTC: Primo a segnalare: SSN dopo 17 minuti.
Update Wed, 28 Jul 2021, 01:06
Moderate 4.3 quake hits near Pinotepa Nacional, Santiago Pinotepa Nacional, Oaxaca, Mexico
4.3 quake 27 Jul 7:43 pm (GMT -5)
An earthquake of magnitude 4.3 occurred early evening on Tuesday 27 July 2021 at 7:43 pm local time near Pinotepa Nacional, Santiago Pinotepa Nacional, Oaxaca, Mexico, as reported by Mexico's National Seismological Service (SSN).
According to preliminary data, the quake was located at a very shallow depth of 7 km. Shallow earthquakes are felt more strongly than deeper ones as they are closer to the surface. The exact magnitude, epicenter, and depth of the quake might be revised within the next few hours or minutes as seismologists review data and refine their calculations, or as other agencies issue their report.
A second report was later issued by the European-Mediterranean Seismological Centre (EMSC), which listed it as a magnitude 4.3 earthquake as well.
Based on the preliminary seismic data, the quake was probably felt by many people in the area of the epicenter. It should not have caused significant damage, other than objects falling from shelves, broken windows, etc.
In Callejon de Romulo (pop. 490) located 4 km from the epicenter, Santo Domingo Armenta (pop. 2,600) 11 km away, and El Ciruelo (pop. 2,200) 13 km away, the quake should have been felt as light shaking.
Weak shaking might have been felt in Santiago Tepextla (pop. 1,400) located 15 km from the epicenter, Corralero (pop. 1,700) 17 km away, San Nicolas (pop. 3,300) 27 km away, Cuajinicuilapa (pop. 10,300) 27 km away, and Pinotepa Nacional (pop. 29,600) 34 km away.
Other towns or cities near the epicenter where the quake might have been felt as very weak shaking include Ometepec (pop. 24,100) located 50 km from the epicenter.
VolcanoDiscovery will automatically update magnitude and depth if these change and follow up if other significant news about the quake become available. If you're in the area, please send us your experience through our reporting mechanism, either online or via our mobile app. This will help us provide more first-hand updates to anyone around the globe who wants to know more about this quake.
Download the Volcanoes & Earthquakes app and get one of the fastest seismic alerts online:
Android | iOS

28.3°C (83 F), humidity: 78%, wind: 3 m/s (6 kts) from S
Fonte dati primaria: SSN (Servicio Sismológico Nacional)
Stima dell'energia sismica liberata: 1.8 x 1011 joules (49.4 MWh, equivalent to 42.5 tons of TNT) More info
[Visualizza mappa]
Mostra la mappa interattiva
[diminuire] [ingrandire]
If you felt this quake (or if you were near the epicenter), please share your experience and submit a short "I felt it" report! Other users would love to hear about it!
If you did NOT feel the quake although you were in the area, please report it! Your contribution is valuable to earthquake science, seismic hazard analysis and mitigation efforts. You can use your device location or the map to indicate where you were during the earthquake. Thank you!

Info: The more agencies report about the same quake and post similar data, the more confidence you can have in the data. It takes normally up to a few hours until earthquake parameters are calculated with near-optimum precision.
Most recent quakes Top 20 past 24 hrs Quakes in Messico

User reports estimate the perceived ground shaking intensity according to the MMI (Modified Mercalli Intensity) scale.
Contribute:
Leave a comment if you find a particular report interesting or want to add to it.
Flag as inappropriate.
Mark as helpful or interesting.
Send your own user report!
There are no user reports for this quake yet. If you felt it be the first to report it!
Nostra app gratuita!