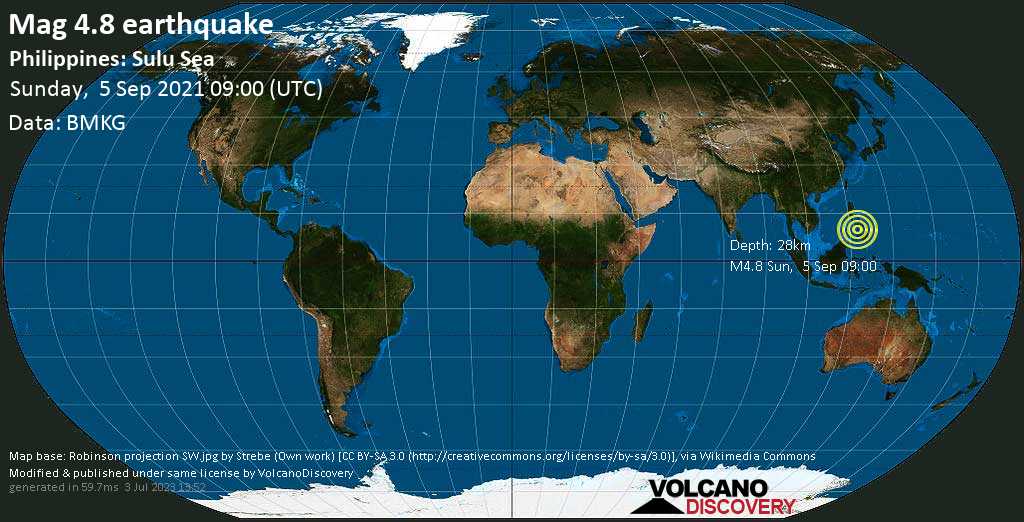 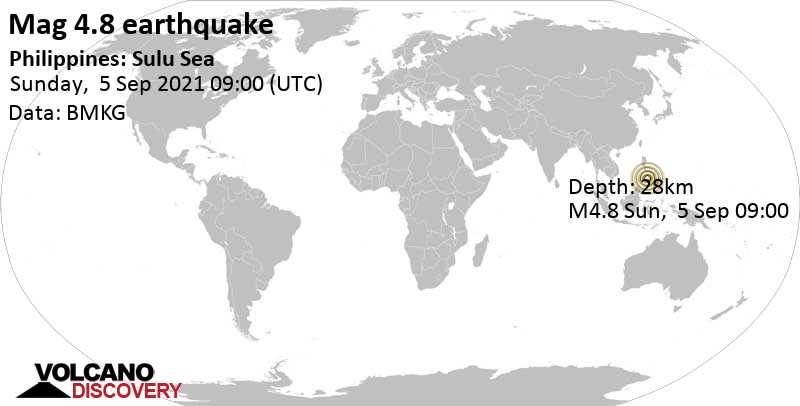 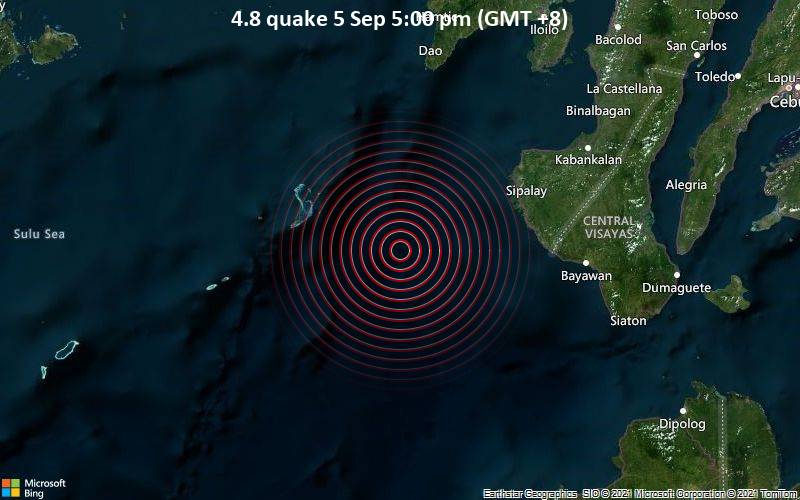 4.8 quake 5 Sep 5:00 pm (GMT +8)
A magnitude 4.8 earthquake near Sipalay, Negros Occidental, Western Visayas, Philippines, was reported only 21 minutes ago by Indonesia's Meteorology, Climatology, and Geophysical Agency, considered the main national agency that monitors seismic activity in this part of the world. The earthquake occurred at a shallow depth of 10 km beneath the epicenter in the afternoon on Sunday, September 5th, 2021, at 5:00 pm local time. The exact magnitude, epicenter, and depth of the quake might be revised within the next few hours or minutes as seismologists review data and refine their calculations, or as other agencies issue their report.
A second report was later issued by the United States Geological Survey, which listed it as a magnitude 4.6 earthquake. Other agencies reporting the same quake include the European-Mediterranean Seismological Centre (EMSC) at magnitude 4.6, and the Philippine Institute of Volcanology and Seismology (PHIVOLCS) at magnitude 4.9.
Based on the preliminary seismic data, the quake should not have caused any significant damage, but was probably felt by many people as light vibration in the area of the epicenter.
Weak shaking might have been felt in Maricalom (pop. 4,500) located 76 km from the epicenter, Sipalay (pop. 24,000) 77 km away, Nabulao (pop. 7,100) 78 km away, Bacuyangan (pop. 7,500) 79 km away, Asia (pop. 23,500) 82 km away, Bulata (pop. 5,200) 83 km away, Colipapa (pop. 7,700) 86 km away, and Inayauan (pop. 10,000) 88 km away.
VolcanoDiscovery will automatically update magnitude and depth if these change and follow up if other significant news about the quake become available. If you're in the area, please send us your experience through our reporting mechanism, either online or via our mobile app. This will help us provide more first-hand updates to anyone around the globe who wants to know more about this quake.
Scarica l'app Vulcani e Terremoti e ricevi uno degli avvisi sismici più veloci online: Android | iOS
Ho sentito questo terremoto
Non l'ho sentito

User reports estimate the perceived ground shaking intensity according to the MMI (Modified Mercalli Intensity) scale.
Contribute:
Leave a comment if you find a particular report interesting or want to add to it.
Flag as inappropriate.
Mark as helpful or interesting.
Send your own user report!
Translate
Bayawan City / Light shaking (MMI IV) / horizontal (sideways) swinging / 2-5 s : At first i yhought my dog was on the back of my chair scratching his head, but i looked back he wasnt there, then i heard my sister screaming earthquakr
San Enrique (129.2 km ENE of epicenter) [Map] / Weak shaking (MMI III) / single lateral shake / 2-5 s
Antipolo / Light shaking (MMI IV) / 2-5 s
Bulata / Weak shaking (MMI III) / simple rolling (tilting sideways along one direction) / 2-5 s
Bayawan City (115.4 km ESE of epicenter) [Map] / Light shaking (MMI IV) : I was just playing until I felt a shake i was like "it probably just me" but then I realized
cuayan city / Weak shaking (MMI III) / single vertical bump
Sipalay Negros Occidental (69.4 km E of epicenter) [Map] / Moderate shaking (MMI V) / both vertical and horizontal swinging / 5-10 s : light swinging like 3-4m then pause, then a sudden bump of much higher magnitude a few seconds later