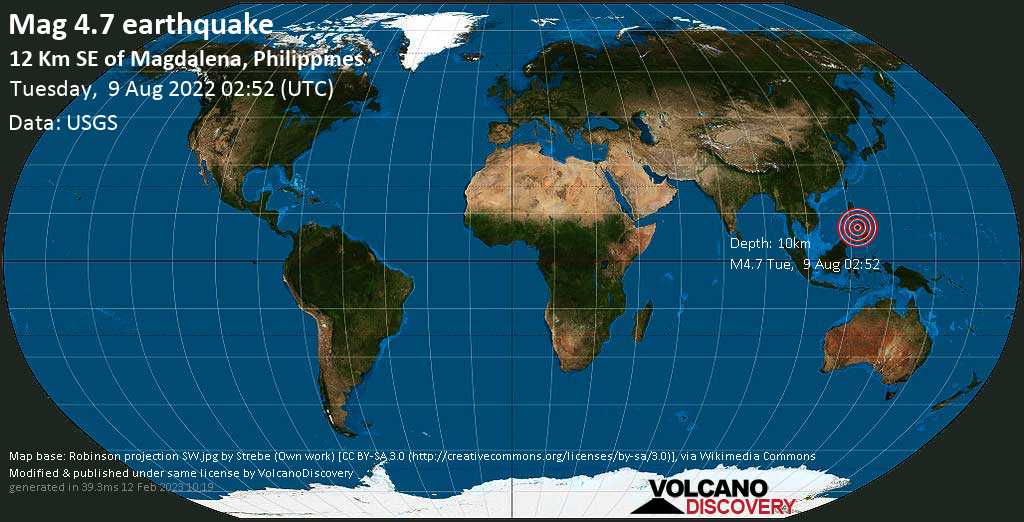 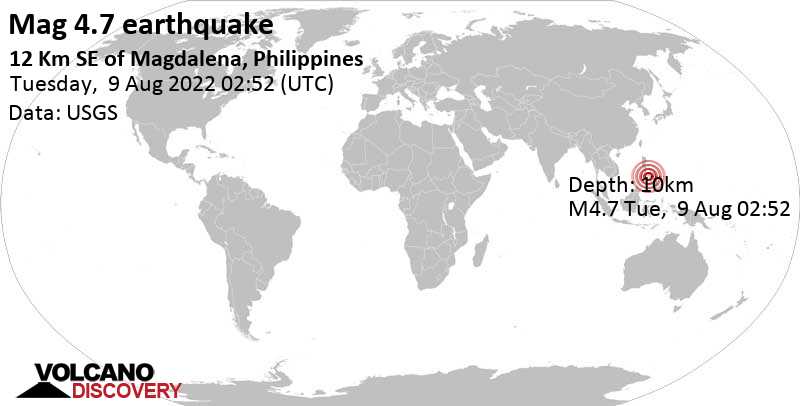 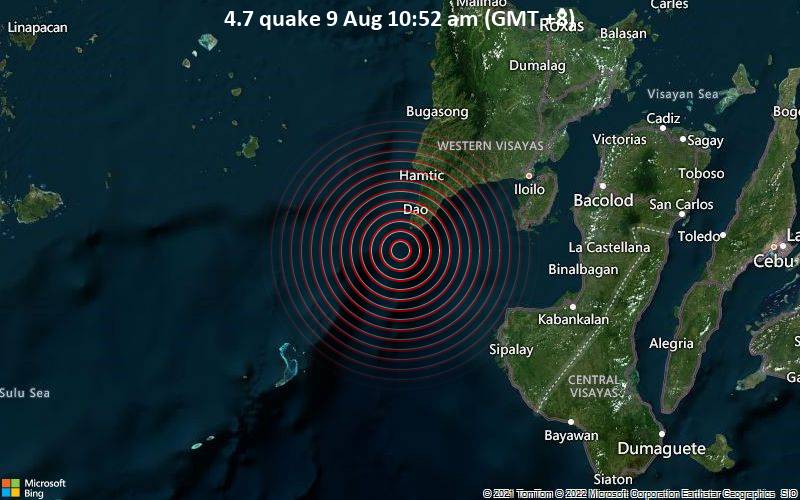 4.7 quake 9 Aug 10:52 am (GMT +8)
A shallow magnitude 4.7 earthquake was reported in the morning near Iloilo City, Iloilo, Western Visayas, Philippines.
According to the Philippine Institute of Volcanology and Seismology (PHIVOLCS), the quake hit on Tuesday, August 9th, 2022, at 10:52 am local time at a shallow depth of 18 km. Shallow earthquakes are felt more strongly than deeper ones as they are closer to the surface. The exact magnitude, epicenter, and depth of the quake might be revised within the next few hours or minutes as seismologists review data and refine their calculations, or as other agencies issue their report.
A second report was later issued by the citizen-seismograph network of RaspberryShake, which listed it as a magnitude 4.7 earthquake as well. A third agency, the European-Mediterranean Seismological Centre (EMSC), reported the same quake at magnitude 4.7.
Based on the preliminary seismic data, the quake was probably felt by many people in the area of the epicenter. It should not have caused significant damage, other than objects falling from shelves, broken windows, etc.
In Magdalena (pop. 2,400) located 19 km from the epicenter, the quake should have been felt as light shaking.
Weak shaking might have been felt in Tobias Fornier (pop. 2,900) located 26 km from the epicenter, San Joaquin (pop. 4,900) 44 km away, Antique (pop. 4,800) 47 km away, Miagao (pop. 8,900) 56 km away, Sibalom (pop. 7,300) 57 km away, and Tigbauan (pop. 12,700) 70 km away.
Other towns or cities near the epicenter where the quake might have been felt as very weak shaking include Sipalay (pop. 24,000) located 85 km from the epicenter, and Iloilo City (pop. 387,700) 89 km away.
VolcanoDiscovery will automatically update magnitude and depth if these change and follow up if other significant news about the quake become available. If you're in the area, please send us your experience through our reporting mechanism, either online or via our mobile app. This will help us provide more first-hand updates to anyone around the globe who wants to know more about this quake.
Scarica l'app Vulcani e Terremoti e ricevi uno degli avvisi sismici più veloci online: Android | iOS
Ho sentito questo terremoto
Non l'ho sentito

User reports estimate the perceived ground shaking intensity according to the MMI (Modified Mercalli Intensity) scale.
Contribute:
Leave a comment if you find a particular report interesting or want to add to it.
Flag as inappropriate.
Mark as helpful or interesting.
Send your own user report!
Translate
Tring Hertfordshire / Light shaking (MMI IV) / horizontal (sideways) swinging / 1-2 s : Woke me up at 5am, the building shook for a very short time. Wondered if something had gone into the house or if there'd been a small explosion nearby (but no noise).