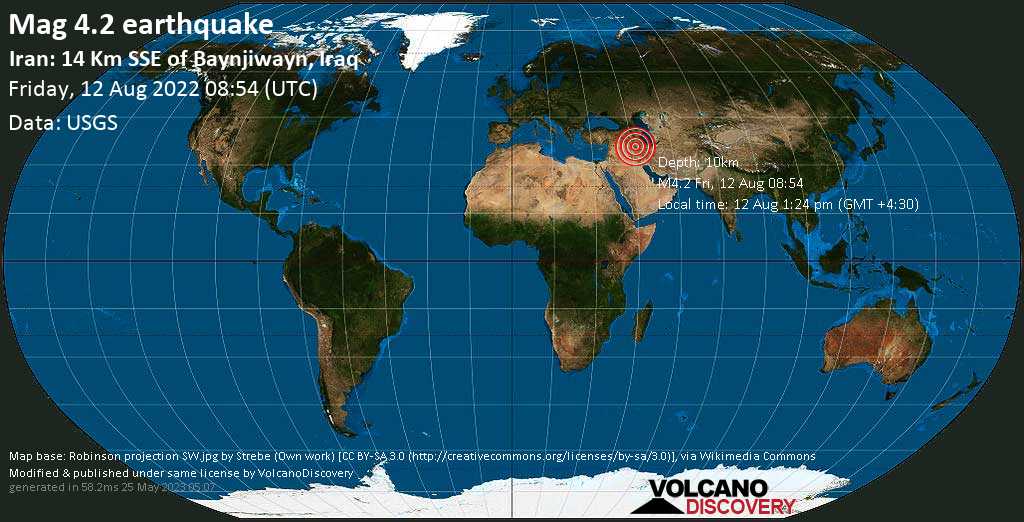 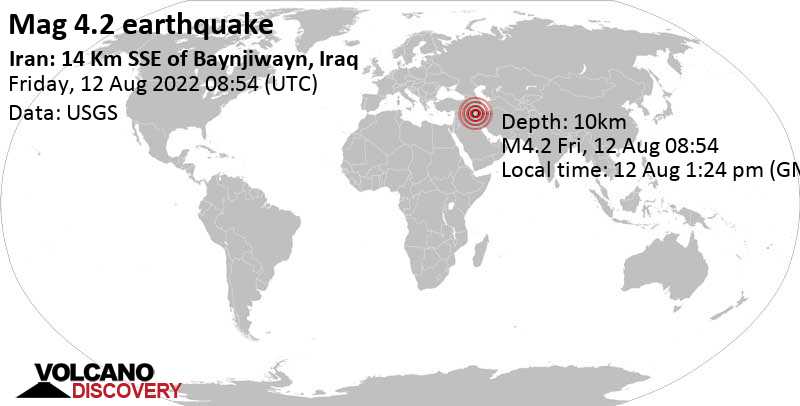 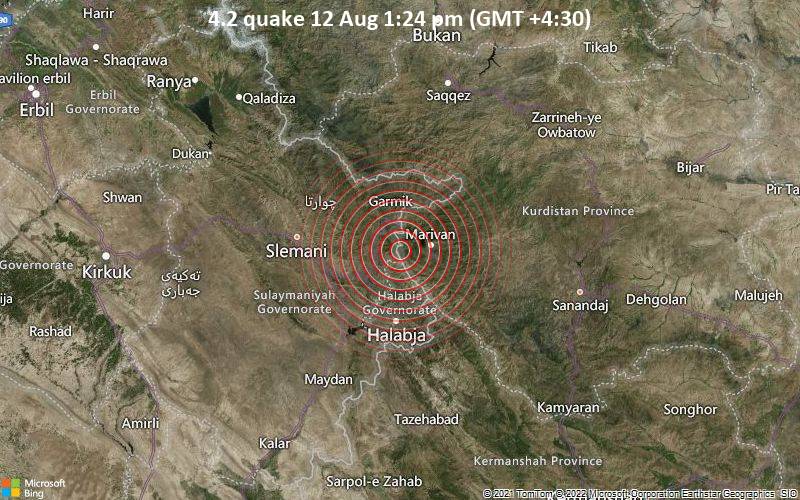 4.2 quake 12 Aug 1:24 pm (GMT +4:30)
The United States Geological Survey reported a magnitude 4.2 quake in Iraq near Penjwin, Penjwin District, Sulaymaniyah, only 23 minutes ago. The earthquake hit around noon on Friday, August 12th, 2022, at 12:54 pm local time at a shallow depth of 10 km. The exact magnitude, epicenter, and depth of the quake might be revised within the next few hours or minutes as seismologists review data and refine their calculations, or as other agencies issue their report.
A second report was later issued by the citizen-seismograph network of RaspberryShake, which listed it as a magnitude 4.2 earthquake as well. A third agency, the European-Mediterranean Seismological Centre (EMSC), reported the same quake at magnitude 4.2.
Based on the preliminary seismic data, the quake should not have caused any significant damage, but was probably felt by many people as light vibration in the area of the epicenter.
Weak shaking might have been felt in Penjwin (pop. 27,100) located 14 km from the epicenter, Marivan (pop. 91,700) 16 km away, and Halabja (pop. 57,300) 36 km away.
Other towns or cities near the epicenter where the quake might have been felt as very weak shaking include Bani (pop. 104,800) located 56 km from the epicenter, Paveh (pop. 17,800) 60 km away, Saqqez (pop. 151,200) 86 km away, Sanandaj (pop. 349,200) 92 km away, and Sanandaj (pop. 349,200) 92 km away.
Scarica l'app Vulcani e Terremoti e ricevi uno degli avvisi sismici più veloci online: Android | iOS
Ho sentito questo terremoto
Non l'ho sentito

Info: The more agencies report about the same quake and post similar data, the more confidence you can have in the data. It takes normally up to a few hours until earthquake parameters are calculated with near-optimum precision.
Most recent quakes Top 20 past 24 hrs Terremoti in Iran

User reports estimate the perceived ground shaking intensity according to the MMI (Modified Mercalli Intensity) scale.
Contribute:
Leave a comment if you find a particular report interesting or want to add to it.
Flag as inappropriate.
Mark as helpful or interesting.
Send your own user report!
Translate
D (1.3 km NNE of epicenter) [Map] / Weak shaking (MMI III) / very short