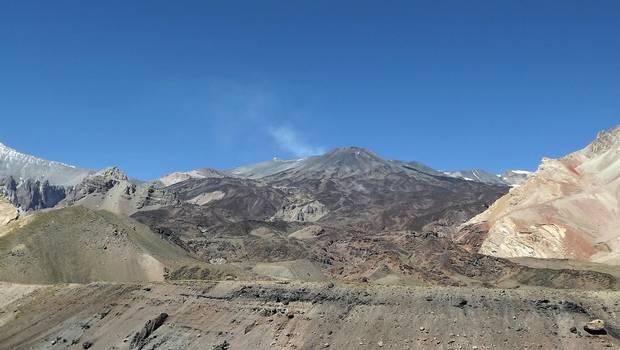 A volcanic-tectonic earthquake of magnitude 3.2 Richter occurred under the volcano yesterday. The epicenter was at 8.2 km depth 25 kilometers northwest of the main crater. This might announce a period of unrest at the volcano. ... Read all
[nascondere la mappa]

Tupungatito volcano is the northernmost historically active volcano of the central Chilean Andes. It is located on the Chile/Argentina border 99 km east of Santiago.
Tupungatito's name is a diminuitive version of the massive Cerro Tupungato stratovolcano located immediately southwest.
Historic eruptions recorded since 1829 were frequent, but usually small explosive ash eruptions. Eruptive activity of Tupungatito is controlled by a N-S-striking fracture and fault system. The volcano possibly has a secondary magma chamber.

Tupungatito consists of a group of 12 young andesitic and basaltic andesite craters and a cinder cone cone at the NW end of the 4-km-wide, glacier-filled Nevado Sin Nombre caldera on the southern side of the volcano.
The caldera is breached to the NW. Many lava flows from the northernmost crater have traveled through the breach.
It has recently been suggested that Tupungatito and other volcanoes in the Andes tend to erupt more frequently in the aftermath of earthquakes, which may be triggers of new activity. Tupungatito erupted within a year of both the 1906 and 1960 earthquakes, as did Calbuco and Villarrica. Similarly, Osorno and Puntiagudo both erupted soon after Chile's 1837 earthquake.
---
Sources:
- Y. Dzierma and H. Wehrmann (2010) "Statistical eruption forecast for the Chilean Southern Volcanic Zone: typical probabilities of volcanic eruptions as baseline for possibly enhanced activity following the large 2010 Concepci´on earthquake", Nat. Hazards Earth Syst. Sci., 10, 2093–2108
- M. Muñoz (2010) "Eruption patterns of the chilean volcanoes Villarrica, Llaima, and Tupungatito", Pure and Applied Geophysics, Volume 121, Numbers 5-6, 835-852 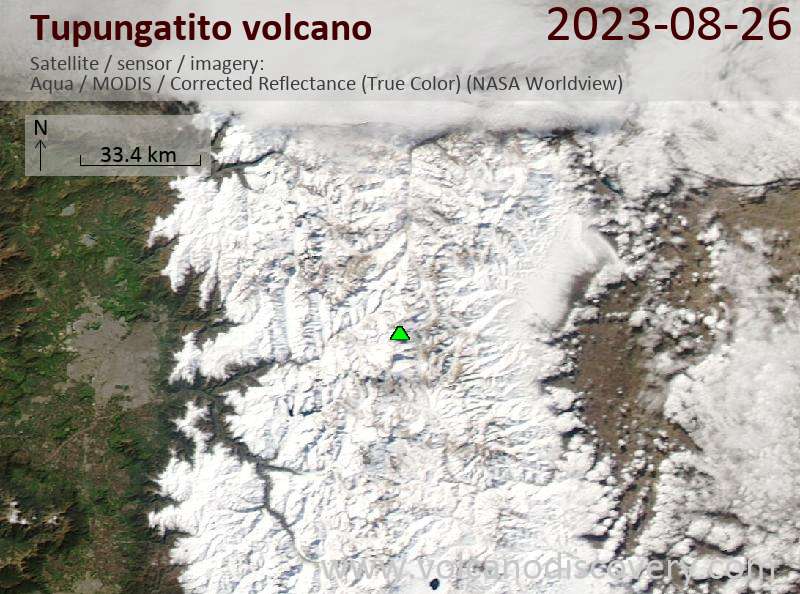 Earthquake monitor
Lists and maps of earthquakes in the world in near real time. Country lists, earthquake archive, and I-felt-it reports.
Greece earthquakes

Latest quakes in Greece
Greece has a lot of earthquake activity, but most of them occur around the margin of the Aegean microplate. The Cycladic islands are located in its center and therefore seismically comparably quiet.
El Hierro

Do you know which is the biggest volcano in the world?
Why is there advertising on this site?
Support us - Help us upgrade our services!
We truly love working to bring you the latest volcano and earthquake data from around the world. Maintaining our website and our free apps does require, however, considerable time and resources.
We need financing to increase hard- and software capacity as well as support our editor team. We're aiming to achieve uninterrupted service wherever an earthquake or volcano eruption unfolds, and your donations can make it happen! Every donation will be highly appreciated. If you find the information useful and would like to support our team in integrating further features, write great content, and in upgrading our soft- and hardware, please make a donation (PayPal or Online credit card payment).