Io-Torishima (also known as Iwo-Torishima or Okinawa-Torishima) volcano forms a small 1x2,7 km island located north of the largest island of the Ryukyus, Okinawa.
Records of historical eruptions dating back to 1664 have consisted of mild-to-moderate explosive activity. Iwo-dake, the volcano forming the NW part of the island, has a small lake, solfataras, and sulfur deposits that were mined in the past.
The name part Tori-shima ("Bird Island") is common for small offshore islands in Japan.

Io-Torishima is composed of 2 andesitic volcanoes: a volcanic edifice on the SE end with 2 nested sommas occupied by the Kusuku lava dome, and Iwo-dake, the NW-most volcano.
---
Source: Smithsonian / GVP volcano information 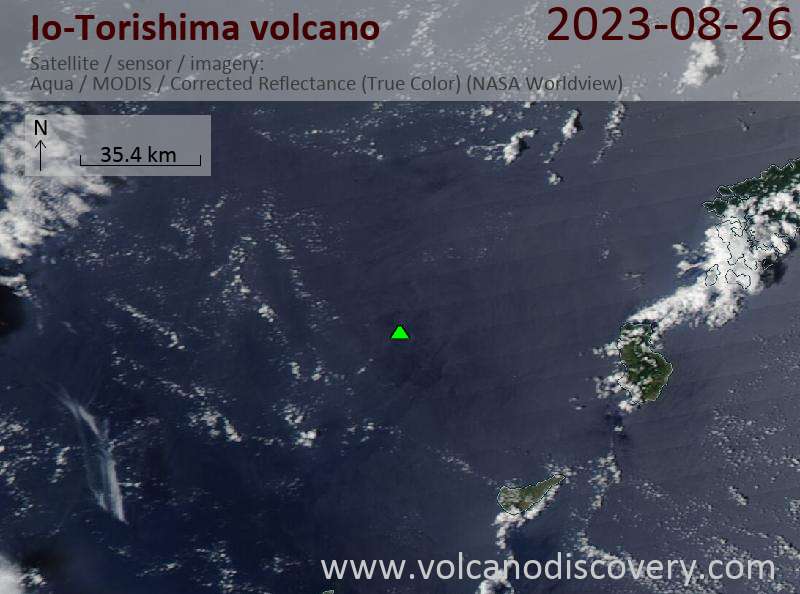 See also: Sentinel hub | Landsat 8 | NASA FIRMS
First visit to our site? If you havn't done it yet, download the Volcanoes & Earthquakes app to get one of the fastest volcano news online:
Android | IOS
Latest news
Sat, 6 Jul 2013, 10:04
Iwo-Tori-shima volcano (Japan): possible small eruption
A possible small eruption occurred this morning. Tokyo VAAC received a (pilot) report of an ash plume rising to 7,000 ft (2.1 km) and drifting 40 nautical miles to the north of the small island. No ash could be detected on satellite images, and sometimes weather clouds are mistaken for ash plumes. Read all
Try our free app!

Ebeko volcano photos
Ebeko on Paramushir Island in the northern Kuriles, Russia, is one of the most active volcanoes in the world. It has been in near-constant eruption for years.
Mayon

Mayon volcano photos
Mayon on Luzon Island, towering above Legazpi city is famous for being one of the most perfectly symmetrical stratovolcanoes in the world. It is also one of the most active and most dangerous volcanoes (not only) in the Philippines.
Volcano Explodes

Land of Theseus
A relaxed walking and study tour to one of Greece's hidden treasures and also one of the least known volcanically active areas in Europe.
Sakurajima videos
Get the ad-free version!
Why is there advertising on this site?
Support us - Help us upgrade our services!
We truly love working to bring you the latest volcano and earthquake data from around the world. Maintaining our website and our free apps does require, however, considerable time and resources.
We need financing to increase hard- and software capacity as well as support our editor team. We're aiming to achieve uninterrupted service wherever an earthquake or volcano eruption unfolds, and your donations can make it happen! Every donation will be highly appreciated. If you find the information useful and would like to support our team in integrating further features, write great content, and in upgrading our soft- and hardware, please make a donation (PayPal or Online credit card payment).